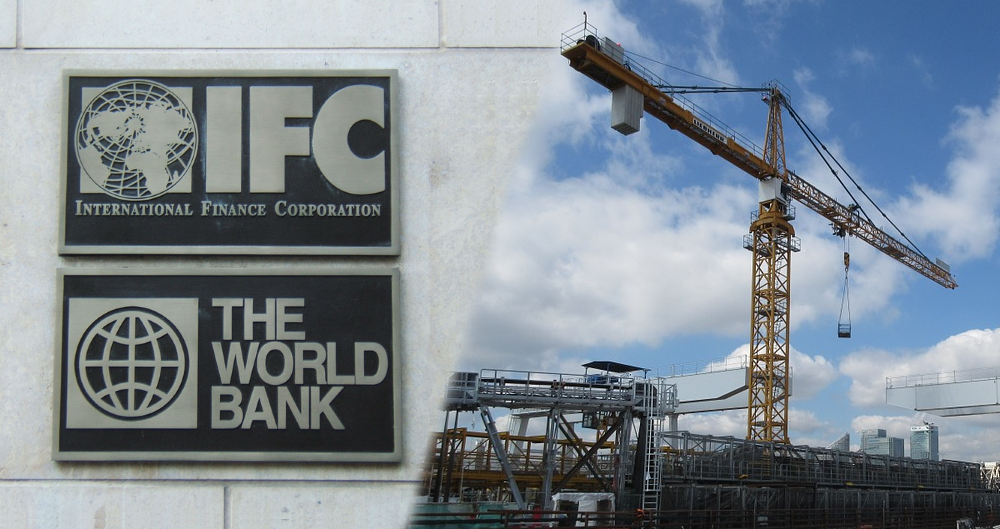 The World Bank and International Finance Corporation plaques, courtesy of Addy Cameron-Huff with CC BY 2.0 license.

The World Bank Group (WBG) is said to be “rethinking” its approach to development, with the major change being an ever bigger role for private sources (such as big investors) to finance development. This may be another significant step for the WBG after its call to move from “billions to trillions” in development financing in 2015.[1]

WBG President Jim Yong Kim alludes to this new direction in his recent speeches: (1) a rethinking of the role of the WB today as a “broker” — a middleman — between big businesses and developing countries; (2) the need to “de-risk” developing countries, that is, shaping a “safe” climate for huge corporate investments especially in conflict-affected states; and (3) the increasing role of public-private partnerships (PPPs) in infrastructure to bring development to the poor in these countries.

This discourse can be seen in recent WBG and International Monetary Fund (IMF) Spring Meetings[2], and especially in the 2017 Global Infrastructure Forum. It is easy to see that these WBG efforts to encourage investment funds to flow into poorest countries in the global South will benefit corporations. But is a “win-win situation,” as the WBG President claims, possible for both the poor and big business? Is it different from what he calls the “bad old days of privatisation”?

IBON International is concerned that the PPPs being promoted to encourage “development” foretell a losing outcome for the poor in the global South. PPPs are arrangements where governments subsidise big private firms to deliver previously state-delivered services or assets. Government surrender of its responsibilities to deliver social services, through PPPs, has notable social impacts not limited to: constraints in access to services (“cost-recovery” schemes that mean hikes in user fees,[3] such as in the case of privatised water supply in Manila);[4] and impacts on communities affected by construction of infrastructure.

In recent years, the WBG has been active in promoting PPPs. But cases of WBG-backed PPPs around the world shed light on the social costs. A water service PPP in the city of Nagpur in India was mired in delays in their replacement of old pipes;[5] limited daily supply of water for communities;[6] and corruption allegations.[7] The water service PPPs in India were considered “milestones” in making water services “stronger, more sustainable, and customer-responsive” by the World Bank.[8]

The private “partner,” an Indian subsidiary of French transnational corporation Veolia, on the other hand, has estimated 387 million euro revenue with the 25-year contract.[9] The International Finance Corporation (IFC), the private sector arm of the WBG, owned 13.9 percent of the Veolia subsidiary.[10] While the IFC denied involvement in the Nagpur project, it only divested from the Veolia subsidiary in July 2014[11] — three years after the PPP contract was signed.

In Latin America, 78 percent of all transport PPP contracts have been re-negotiated due to private firms’ addenda to contracts, with an average cost increase of USD 30 million per addendum.[12] Also, PPPs in Latin America linked to the firm Odebrecht — which received USD 50 million in IFC credit guarantees in 2011 — have recently met a corruption scandal; a PPP in Magdalena River in Colombia has faced the opposition of communities left unconsulted by a largely Odebrecht-owned firm.[13]

Thus WBG’s perceived role as an “honest middleman” between capital and the poor in the global South actually betrays a bias for the former, at the expense of development for the marginalised. The agenda for big private sector investments in such onerous PPPs in developing countries, or what it calls “emerging markets,” is also seen as “motivated by the needs of investment funds (including pension funds) in developed countries that face very low or even negative interest rates at home.”[14]

Currently, the IFC and the Multilateral Investment Guarantee Agency (MIGA) will likely be central to the PPP agenda as the private sector and the political risk insurance arm of the WBG, respectively. The IFC is expected to pursue its “advisory” function to governments and businesses[15] to make developing countries, especially conflict-affected ones, attractive to corporate investors.[16] On the other side of the coin, new efforts of the IFC in stimulating large sums of private finance for investment in developing countries are through its Managed Co-Lending Portfolio Program (MCPP).[17][18] The MIGA’s role is expected to be important in protecting corporate investors through insurance for political events that might cause loss of profits.

Such WBG mechanisms further protect and privilege corporations. But where are international instruments that could hold corporations accountable? Currently, a “legally binding treaty on transnational corporations and human rights” is on the agenda for a United Nations working group.[19] This could be a potential mechanism to hold corporations and WBG-promoted PPPs liable to the threats they pose to people’s rights and access to services and people-centred development. Civil society organisations, however, will have to be vigilant about its possibilities and limits.

Aside from holding corporations accountable, one needs to ask: to what extent do people and communities have a role in processes that affect them?The case of the Colombia water transport PPP reveals how the people could be absent in development decisions. In another PPP, for a hospital in Lesotho, the IFC’s role as “transaction advisor” was reported to include acting on behalf of the government in the negotiation process.[20] Thus peoples in the global South will have to demand both broader peoples’ participation in national development process
es, and to push state actors to assert national sovereignty against continued IFC efforts to “advise” their governments.

It is also ever pertinent to assert universal access to basic social services especially in the global South and stress that this is a government responsibility. Slovenia, for instance, made water a constitutional right (“water resources…are not a market commodity”)[21] in reaction to threats of broadening corporate control.[22] As part of measures to regulate private sector actors and ensure their potential development contributions, transparency of PPP contracts and related documents such as impact assessments also need to be the rule.

Such guarantees would be important elements for people-centred development plans, pursued with and for the people, in order to protect economic and social rights from the PPP-driven privatisation waged in the WBG’s “new direction.”IBON International contends that the current WBG push for PPPs, despite the WBG president’s claims, is ‘privatisation by other means’ — and will benefit corporations at the expense of the poor. It is thus vital for peoples, communities and their organisations themselves to act and organise towards protection of their rights. #

[4] Water services in Manila, Philippines underwent privatisation since late 1990s, with two firms being “concessionaires” (Maynilad Water Services, Inc. and Manila Water Company, Inc., with the IFC providing a loan to the latter in 2003 and acquiring USD 15 million in equity in 2005). Water rates have since risen by more than 500 and 900 percent, for the respective firms. Recently, Maynilad won an international arbitration case requiring the Philippine government to pay the firm 3.4 billion pesos, for “losses” incurred due to state rejection of further rate hikes. See: http://ibon.org/2017/08/arbitration-ruling-favours-corporate-greed-over-peoples-rights-wpn/

[21]“Slovenia adds water to constitution as fundamental right for all.” 2016. https://www.theguardian.com/environment/2016/nov/18/slovenia-adds-water-to-constitution-as-fundamental-right-for-all

US and EU must show leadership and responsibility in climate talks