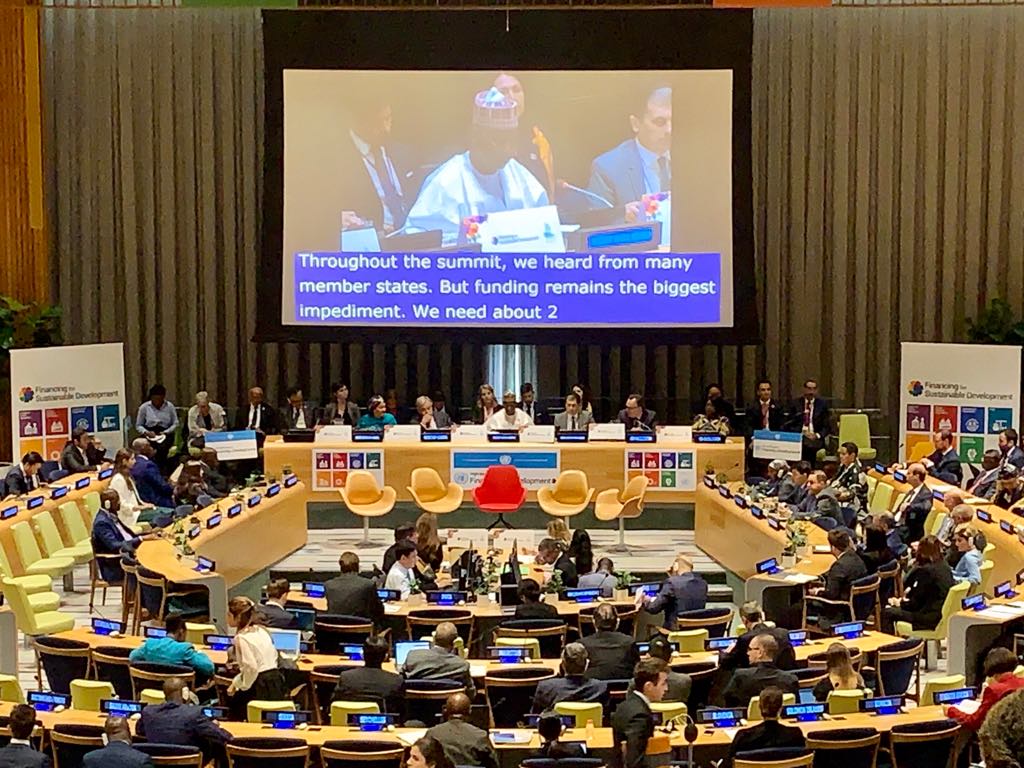 26 September 2019, New York City — Following a disappointing Climate Action Summit that yielded few commitments, despite science showing the need for urgent system change, and a Sustainable Development Goals (SDGs) Summit acknowledging that the international community is off-track to achieve the SDGs in 10 years, the High-level Dialogue (HLD) on Financing for Development convened by the UN General Assembly on 26 September 2019 was reduced to a mere talk shop promoting private capital. The HLD was held to supposedly provide political leadership and guidance for mobilising resources for implementing the SDGs, but hardly encouraged significant debate with exceedingly limited civil society participation.

There was no shortage of issues brought up by presidents, prime ministers, high-ranking officials and experts, from dwindling official development assistance (ODA), corporate tax avoidance and illicit financial flows that drain economies, inadequate climate finance, to mounting debt burdens and the accompanying socio-economic and ecological impacts of all these concerns. Yet so-called “solutions” boil down to attracting, mobilising and de-risking private finance in the name of implementing the SDGs.

Bill Gates, who delivered a keynote address, broached the urgency of protecting aid for development and targeting it where it is needed the most, but also stressed the enthusiasm for blended finance to unlock private sector financing. Likewise, David Lipton, International Monetary Fund (IMF) Acting Managing Director, endorsed blended finance as a “new” approach to fill the huge investment gaps. There is nothing new about this, as the World Bank and other multilateral development banks have propagated the rhetoric of a gap in financing both infrastructure and the SDGs.

The final segments of the HLD featured declarations of commitments and initiatives from some countries. Denmark, for example, announced its intention to double climate-related development assistance and to contribute USD 22 million towards climate-smart investments in infrastructure in low-income countries. The United States, meanwhile, said its commitment to international development is enshrined in President Trump’s National Security Strategy and announced the establishment of a new international Development Finance Corporation to expand its capacity to mobilize private investment as well as advance private sector-led “development.”

IBON International, in a June 2019 policy brief , already noted that discussions on implementing the current sustainable development agenda are taking place in a context of protracted economic and financial crisis, soaring debt, vast inequalities amid corporations’ growing monopoly power, and a climate crisis that has galvanized the youth whose future is in grave danger. Efforts to create more favourable environment for private capital to flourish, including risk-mitigation, will continue to leave underdeveloped countries at the mercy of the global market and make them more vulnerable to exploitation. The corporatisation of development is essentially the privatisation of the basic human right to development.

Civil society organisations engaging the financing for development process declared the HLD a huge missed opportunity that could have tackled global systemic issues. The Civil Society Financing for Development Group, of which IBON International is a coordinating group member, said in a statement that “bold reforms to democratize global economic governance and realign the financial system” are necessary for climate justice and sustainable development.

The group called for institutional reforms for the multilateral system and economic governance, among them a global debt workout mechanism, a UN intergovernmental tax commission and a global technology assessment mechanism. It also highlighted the normative role of the UN in global policy-making to ensure coherence, pointing out that “the narrative on blended finance and public-private partnerships (PPPs) is inconsistent with the Addis Ababa Action Agenda commitment to developing principles and standards to safeguard the public interest”.

For development to be truly democratic, it must belong to the people. It requires social movements to challenge and shift existing power relations, collectively address inequities and advance economic, social and climate justice. IBON International puts forward the following recommendations on financing for development: