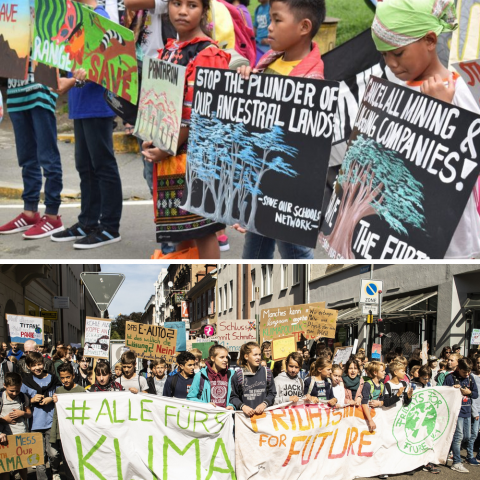 It has been some weeks since the Global Climate Strike and yet animated conversations continue to take place around the need for a swift and adequate climate action vis-à-vis the reality of the climate emergency. Climate activism has been reinvigorated, with new, young leaders taking the lead in organizing mass actions against fossil-fuel capitalism. Frontline communities in the global South uphold the principle of climate justice ensuring that it remains a critical part of the movement’s focus.

But while around the world demand for action is growing, commitments of leaders of major economies fall short of expectations. At the United Nations Climate Action Summit in New York, no new promises to take stronger climate action were made despite the latest warnings of climate science about increasing global temperatures and more frequent weather extremes. Elite-led governments are sticking to their business-as-usual model, practically waging a war on the Earth’s systems and the future generations.

As we gear up for the 25 th United Nations Framework Convention on Climate Change (UNFCCC) Conference of Parties (COP 25) in Chile, we need to ensure that peoples’ autonomous actions in the streets for climate justice create strong political pressure to move governments to action, especially developed countries that have gained their wealth from burning fossil fuels.

Around four million people joined the Global Climate Strike across all continents, many of them students and youth. The action led by Greta Thunberg’s Fridays for Future is the largest to date, with demonstrations at more than 5000 locations in 161 countries. It was the third climate strike this year, following similar mass global demonstrations in March and May.

Some of the largest demonstrations were in Germany where a total of 1.4 million people across the country participated in simultaneously held marches. More than 330,000 demonstrated across Australia; 100,000 in the UK; and up to 300,000 in the US. Thousands more took to the streets in Uganda, Nigeria, Ghana, Colombia, Bolivia, Brazil, India, Vietnam, Indonesia, the Philippines, Japan, and New Zealand.

Significant protests were also held across the South Pacific, including in the Solomon Islands and Fiji. Countries in the Pacific region are among the hardest hit by the acute climate crisis as a result of rapidly rising sea levels.

The protests were directed against the inaction of world governments and their inability to take adequate measures to resolve the crisis, despite increasingly grim warnings from the UN and other agencies that if greenhouse gas emissions are not drastically reduced, at least half the world’s population will face one or more climate-related disasters in the following decade. Many were also disappointed that international climate summits such as the 2015 Paris Agreement have not lived up to the demands of vulnerable frontline communities in the South.

There were efforts to locate the current climate crisis from within broader social and economic struggles. The general consensus was that capitalism was largely to blame for bringing us to the brink of a climate-induced catastrophe that could destroy humanity. Capitalism is predicated on the devouring of increasing amounts of raw materials and energy. Its insatiable hunger for profits has led highly industrialized countries to colonize and plunder territories and countries in the global South. This process continues today under the guise of investment deregulation, trade liberalization, and the privatization of the commons. Most recently, the IPCC Special Report on Climate Change and Land warned that land degradation, of which monopoly agro-TNCs are largely culpable, is increasing our vulnerability to climate change while compromising food security and biodiversity.

Today, the people of the global south face a slew of environmental threats that further amplify pre-existing poverty and inequalities.

Many of the world’s biggest emitters were visibly missing at the summit. US President Donald Trump made an appearance but left as soon as he arrived. The US has threatened to withdraw from the Paris Agreement. It is not on track on its voluntary commitments to the accord in any case and has even rolled back a host of its national environmental regulations meant to curb GHG emissions.

Brazil, Japan, Australia, and Canada were also missing. None of these countries have yet signified intentions to enhance their nationally determined contributions by 2020. The European Union has not mentioned cutting emissions faster either.

The refusal of developed countries to take bolder climate action is driving the reluctance of countries such as China and India to issue stronger and swifter targets to transition towards low-carbon development pathways.

Without their participation, the global community cannot limit warming to 1.5 degrees Celsius.

During the summit, nine additional countries pledged to replenish the Green Climate Fund (GCF) but several major contributors have remained silent so far. The GCF is a critical part of the Paris Agreement and it needs to get back into shape sooner rather than later.

Against the backdrop of new data from climate science revealing the quickening pace of warming and the continued procrastination of world leaders, UN Secretary-General Antonio Guterres could not help but express exasperation in his opening remarks:

“I will not be there, but my granddaughters will, and your grandchildren, too… I refuse to be an accomplice in the destruction of their one and only home.”

The road to Santiago

The 25 th COP in Santiago de Chile is critical. We need to build on the lively discourses and actions initiated by youth climate activists to achieve an equitable deal. Such a deal has to be founded under the principle of common but differentiated responsibility or CBDR as defined in the Kyoto Protocol of 1997:

“…commitments under the convention will depend on the effective implementation by developed country parties of their commitments under the Convention relating to financial resources and transfer of technology and will take fully into account that economic and social development and poverty eradication are the first and overriding priorities of the developing country parties.”

Today, the principle of CBDR, is under attack. Since the Protocol was established, developed countries rather than reduce have even increased their GHG emissions by 15 percent. Since COP 21, barely half of the 100 billion dollars commitment to climate finance for developing countries has been achieved.

The continuing struggle for climate justice has to be advanced to ensure that these demands are met and that developed countries and their elites and corporations do not get away scot-free.  ###