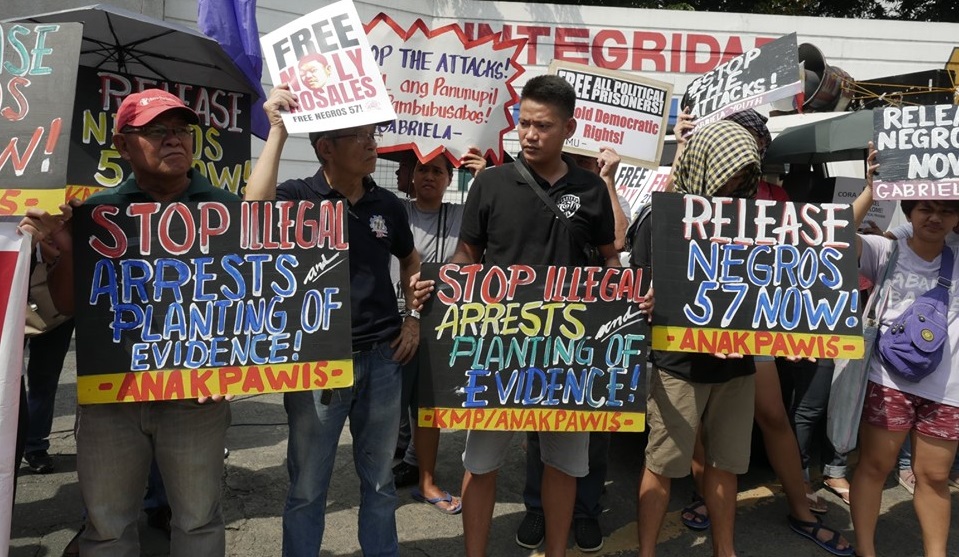 Last October 31, around 60 peasant, women, trade-union and other activists were unjustly arrested in Negros province and Manila, Philippines, following a search of their offices on dubious pretexts. Immediately, this garnered calls for solidarity from representatives of international civil society organisations (CSOs) gathered at the Global Perspectives 2019, an annual conference of CSO leaders, in Addis Ababa, Ethiopia. This was followed by other cases in November 5, with 3 other activists arrested in Manila and one killed in Laguna.

IBON International joins people’s movements and CSOs in condemning such shameless disregard for civil-political rights. We enjoin other rights defenders, movements and CSOs around the world to also express their solidarity with Philippine rights defenders and movements under attack from state forces. We also urge progressive parliamentarians, governments and the international community at large, to foster external conditions for greater scrutiny and accountability for Philippine state actors.

In the eyes of the current administration, dissent has increasingly been deemed a crime. Search warrants leading to the arrests in Negros and Manila were issued by a single judge in another city, indicating this as another textbook case of political repression. The unjust arrests were made through the recycled tactic of planting “evidence,” such as firearms, to be “found in possession” of civilian activists or in their offices, with subsequent filing of spurious charges.

With security forces’ claim they will “prove” ties of the arrested civilians to the underground communist movement, the peddled narrative is that the arrested were armed Maoist fighters—with the victims judged “guilty until proven innocent.” Concerns against security forces’ tactics are not unprecedented, with widespread accusations of police planting of firearms and illegal substances in the crime scenes of “drug war” victims.

IBON International is highly concerned that the cases would be precedents for more unjust arrests and repression on a larger scale. It is the latest in government actions that shroud the country under de facto martial law, adding to the declared martial law in southern Philippines.

We are alarmed at the new level of impunity, and the deterioration of the rights situation and democratic spaces. The Negros region, where more than 50 of the individuals were arrested, has seen a spike in rights violations in the past year. Fourteen individuals, mostly farmer-activists, were killed in joint police-military operations in late March 2019, with another 9 killed in October 2018—as farmers continue to assert the right to till lands vis-a-vis land monopolies.

Amid repression of critics, the false “drug war” continues against the poor, while high police officials remain scot-free from any accountability, despite being more disgraced from unresolved corruption allegations. Neoliberal policy prevails and economic priorities for infrastructure, such as the New Clark City and the New Manila International Airport, mean development aggression for communities.

The Philippines has been called the worst country for land rights defenders, and among the worst countries for workers, for 2018. The worsening rights situation from the misleadingly named “war on drugs” and repressive attacks already garnered UN attention, with the UN Human Rights Council (UNHRC) approving a resolution last July for greater scrutiny and accountability. The currently dark trajectory must be reversed, away from silencing of people’s voices towards people’s substantive participation in political and economic processes, including in relation to development.

IBON International reiterates movements’ calls to hold Philippine state actors accountable and bring justice for the victims of the “anti-drug” campaigns and the militarist “security” operations. Following the UNHRC resolution, we call on the international community, governments and progressive parliamentarians to create conditions viable for further action on the current rights situation, ranging from ending United States’ military aid supportive of police and military rights violations in the Philippines, to continuing an impartial UNHRC-led probe. The defense of civil-political rights—especially of land rights defenders, unionists and women’s organisations—is a requisite for the people’s exercise of sovereignty in determining and leading their economic and development paths. #