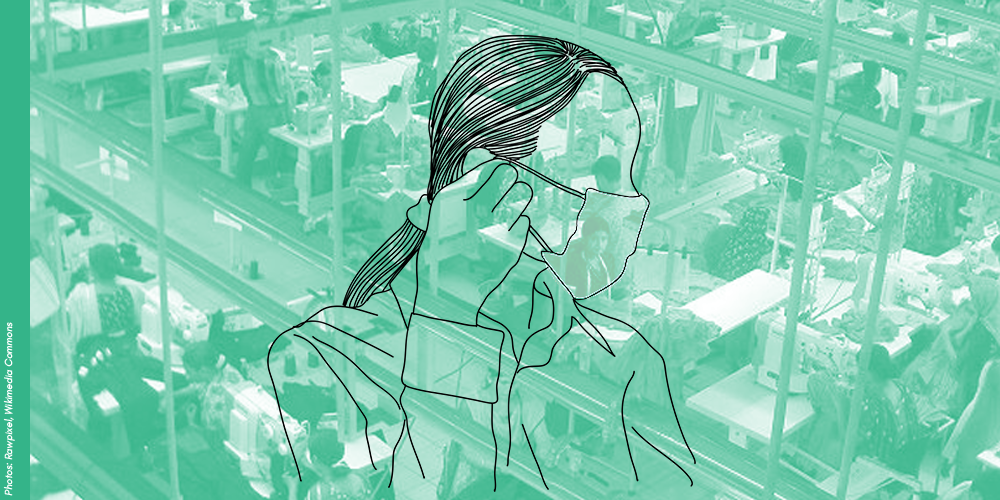 The world is at a critical point, with the Coronavirus cases growing in many parts of the world and an incoming recession. Decades of “business as usual” have already left working peoples, especially women, with the biggest burdens of today’s pandemic while showing that it is their labour that has sustained the world economic engine and created its wealth. IBON International believes that international cooperation and solidarity today must lead to urgent measures to protect people’s rights. In the long run, the world must never return to “business as usual.” Today’s extraordinary times require extraordinary measures for development: the international community must ensure that radically different economic, financial and governance norms emerge from this emergency.

The world must never return to “business as usual.” Today’s extraordinary times require extraordinary measures for development: the international community must ensure that radically different economic, financial and governance norms emerge from this emergency.

People’s rights must be at the centre

International cooperation and response must address the outbreak’s social aspects, and put people’s rights at the centre as inequalities worsen. The rights of working people, women, the urban poor, rural communities must be ensured. The well-being of the elderly, people with existing health problems, prisoners, and those affected by war must be given urgent attention. Aside from the calls for global ceasefire, the international community must respond to the UN calls to release especially political prisoners and jailed dissenters, as well as elderly, sick detainees and low-risk prisoners.

Today, 40% of the world population do not have access to water and soap at home.[i] As workplace closures are enforced, 25 million more might be unemployed, and workers in both global North and South could lose USD 3.4 trillion in incomes.[ii] Women comprise 70% of the world’s healthworkers, and face bigger risks. Many women, who still shoulder much of housework and care, face increased intensity in such tasks amid quarantines.[iii]

In Africa, medical facilities were already scarce even prior to the pandemic. In sub-Saharan Africa, with high rates of poverty and majority of the urban population in slums, lockdowns without provision for food and facilities threaten starvation and outbreak. In Asia, both India and the Philippines have seen lockdowns, with informal labourers suddenly without income sources. State responses in the Philippines were also primarily militarist, with priority testing for elite politicians but neither mass testing for ballooning persons-at-risk nor ample support for healthworkers. Healthcare systems in many countries in Latin America and the Caribbean were unprepared, such as Peru with only 400 respirators available, or Venezuela wracked by economic sanctions. The 100 million people afflicted by war and militarism, the UN admits, face “devastating” consequences with cramped living conditions and without sanitation and health services, such as in Yemen, Syria, and Palestine.

Our ambition must break from “business as usual”

The situation demands even more ambition. International economic and finance policy tools must be shifted to serve people’s needs.

IBON International welcomes quick responses in this time of need, and developed countries must step up support for humanitarian response and for stimulus packages especially for workers and the poor. We also assert that the situation demands even more ambition. International economic and finance policy tools must be shifted to serve people’s needs. Financing and stimulus, while maintaining the rest of neoliberal and monopoly capitalist structures, would only serve as fuel for already broken engines. It would mean traveling on the same path that unequally burdened working people and the marginalised.

Privatisation of healthcare, housing, and water supply must be reversed by governments and discouraged at international level. That certain states ran to nationalisation today shows that privatised, for-profit healthcare has never been fit for effective curtailing, and indeed prevention, of disease.

We need to move away from norms that have already warped development prospects in the global South with large debt burdens and thus less funds for social services. Current policy proposals could still mean more debt, such as IMF loans as financing sources which also mean future austerity measures. The current response of lower interest rates was already used after 2008, which then drove private lenders to flock to the global South. Not only debt restructuring and suspension of payments, but also cancellations (and repudiations from borrowers) must be on the table today. Grants must be the primary line of financing.

The dogma of “financial integration” must be rethought, and capital controls must be options for Southern economies exposed to the caprices of foreign investors. This is a needed change after decades of Southern economies shaped to be dependent on the volatile whims of finance capital—which usually exit at the first sign of risk on profits, such as with today’s pandemic and recession, leaving economies dry.

Many Southern countries have been made dependent on exporting oil, agricultural, and mineral goods to the world market. It is now revealed to be a curse as these countries receive limited revenue sources amid trade slowdowns. Instead of insisting on blanket trade liberalisation, international norms must encourage strategic industrial policy and rural development to provide for people’s needs even amid sudden pressures such as pandemics. Trade and investment agreements that drove corporate monopoly control of medical goods such as medicines must also be reviewed. Countries must be allowed to freeze prices of basic goods for consumption.

International cooperation and solidarity remain the only path to suppressing the outbreak itself.

International cooperation and solidarity remain the only path to suppressing the outbreak itself. The sharing of medical supplies, technologies, and know-how among countries must be heightened. Cuba, an exception in its regard for healthcare, showed solidarity as it sent doctors, nurses and even anti-viral drugs to many countries. In contrast, the US President offered USD 1 billion for exclusive patent rights to a COVID-19 vaccine, showcasing only more of elite interests.

In the spirit of solidarity, the international community must also condemn militarism for great power interests, especially as peoples wracked by US-led or US-backed militarism, in Yemen, Syria and Palestine, are now among the most vulnerable to contagion. Other US coercive measures, such as continuing sanctions on many Southern countries, must also be condemned as these deprive countries of resources for their response.

State surveillance must never be a “new normal”

There must be no trade-off between people’s fundamental rights and pandemic responses. Today, around 20% of the world population, or 1.7 billion people, are already under some form of lockdown.[iv]Governments’ lockdowns without social support and health-based measures could only worsen already deep inequalities,another brick on the backs of workers without secure employment and living wages.

Not today, nor after the health emergency, must massive state surveillance be the “new normal.” The spread of state surveillance must be checked especially in countries already seeing authoritarian trends prior to the pandemic. State actors must be held to account if they attack media personnel or dissenters. Militarist measures must be evaluated according to standards of international humanitarian law and civil and political rights. Those in power must be the ones to shift towards more transparency and effective public information, which are more effective during outbreaks than just an iron hand.

There must be no trade-off between people’s fundamental rights and pandemic responses…Not today, nor after the health emergency, must massive state surveillance be the “new normal”…Times of crisis require more empowered civil society, people’s organisations, and communities.

Times of crisis require more empowered civil society, people’s organisations, and communities. On the one hand, only with an empowered citizenry and assertive movements could state abuses, unaccountable governments, and anti-people emergency measures, be checked. The voices of civil society and people’s organisations, especially of working people and women, must be allowed to shape emergency responses as their lives and livelihoods are at stake.

On the other hand, peoples themselves could contribute to healthcare and economic measures. For instance, in the Philippines, the people-led Philippines-Cuba Friendship Association (AMISTAD) has been appealing for Cuban medical assistance as the Philippine government continues to mistreat the health emergency as a security issue requiring more militarised measures. In the long run, people’s substantive participation in economic decisions is key for social transformation at national level.

Today, the world needs structural change for sustainable development, away from policies and paradigms that have left millions to fend for their own well-being without guarantees of their rights. The people need nothing less than ambitious policies as the pandemic showed even more the cracks in the neoliberal edifice. #

[i] UNICEF. 2020. “Handwashing with soap, critical in the fight against coronavirus, is ‘out of reach’ for billions.”