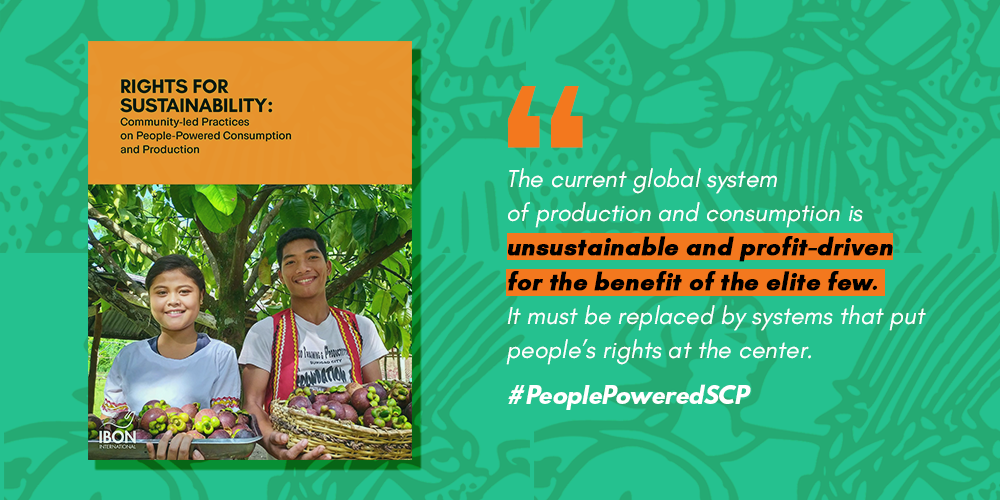 “The current global system of production and consumption is unsustainable and profit-driven for the benefit of the elite few. It must be replaced by systems that put people’s rights at the center,” according to the book.

“The current global system of production and consumption is unsustainable and profit-driven for the benefit of the elite few. It must be replaced by systems that put people’s rights at the center,” according to the book. It features case studies of grassroots practices in Kenya and the Philippines that show how the protection of people’s rights and communities’ access and control over resources are key in promoting genuine sustainability.

For IBON International, a People-Powered Sustainable Consumption and Production (PP-SCP) framework is based on the following principles: (1) people’s rights are protected and advanced in the whole production and consumption chain; (2) self-sufficiency from the community to the national level is promoted through people’s sovereignty; (3) social innovations and community actions toward SCP are encouraged and supported; and (4) the accountability of corporations and governments is demanded and ensured.

The current volume follows a 2019 book on dominant production and consumption paradigms and current state policies in Kenya, Indonesia, and the Philippines, which argued that the current dominant approach to SCP has led to incoherent policies in initiatives directed at the environmental, economic, and social pillars of development. The prevailing bias towards the market under globalisation and the even greater power being accumulated by corporations pose formidable challenges to SCP and sustainable development, in general.

Amid today’s economic, health, and ecological crises, and the regression in people’s civil-political and economic, social, and cultural rights, IBON International believes that the world must never return to “business as usual.” The COVID-19 pandemic has further laid bare the unsustainability and unjustness of the current neoliberal global consumption and production system that continues to lay waste to ecosystems; privatise public services such as health, water, education; depress workers’ wages and deprive them of social protection; force peoples to give up self-sufficiency; hinder people’s food sovereignty; and prevent them from exercising their democratic rights all in the name of economic growth that amasses huge profits for an elite few while impoverishing millions.

The advancement of people’s rights is supported by the communities’ assertion of their sovereignty through collective action and the exercise of democratic governance within their organisations. The cases studies in the new book also show that promoting people’s rights and welfare can go hand-in-hand with the protection of the environment. Radically different systems are needed to end the irrational and lethal neoliberal globalisation, and will lead the way towards structural change for sustainable development.

You may get the digital copy of the book here. ###

WTO Nairobi Ministerial: Deathbed of the Doha Round?