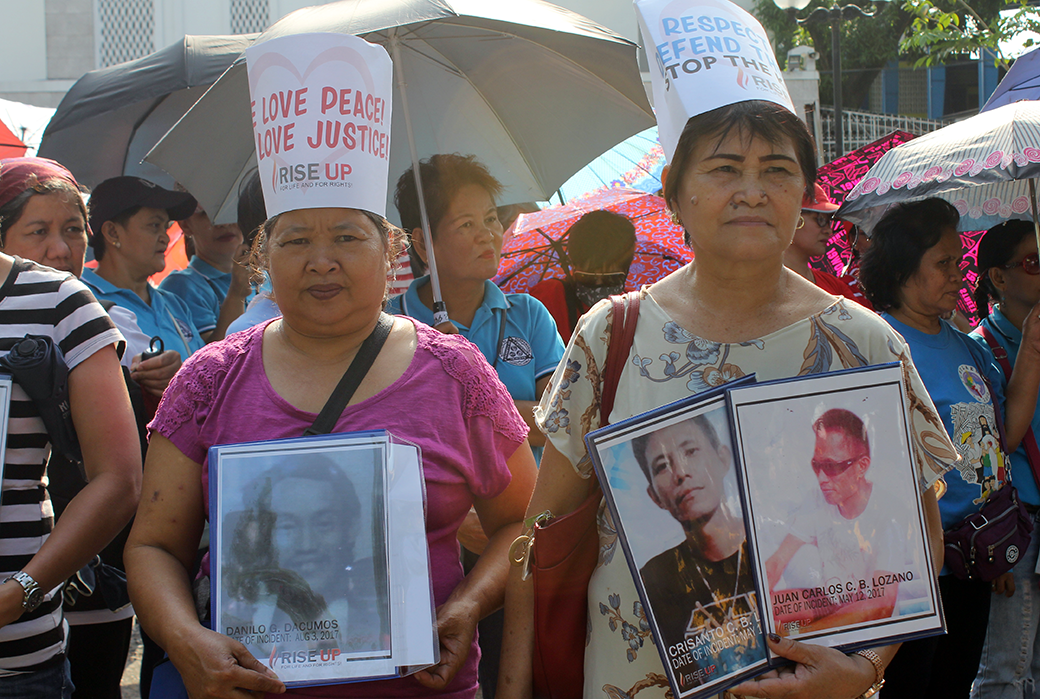 Llore Pasco (on the right) with Purisima Dacumos, another mother who also lost her son in Duterte's bloody drug war (Photo by A.M. Umil/Bulatlat).

Last June 24, 2022, International Criminal Court (ICC) Prosecutor Karim Khan has filed a request with the pre-trial chamber to resume the investigations into state-perpetrated killings in the Philippines related to President Rodrigo Duterte’s drug war amid lack of genuine domestic efforts to investigate the killings. The investigations could result in the issuance of arrest warrants for state perpetrators.

“Let’s not be scared,” Pasco says, “because the more we fear them, the more they will try to intimidate us.”

A peaceful life away from politics, in his hometown of Davao City, is what President Rodrigo Duterte hopes is waiting for him after the expiration of his term at the end of June.

Duterte’s six-year stint in the highest office in the country was one mired by several controversies. One of the most prominent is his “War on Drugs.” An anti-illegal drugs campaign was the bedrock upon which his presidential campaign was built on. In just the first few years of his term, extrajudicial killings as a result of anti-drug operations began numbering in the thousands. These victims were primarily unemployed men in poor communities — not the powerful drug lords that Duterte vowed he would target.

Among those killed in these anti-drug operations were the two sons of Llore Pasco, Crisanto and Juan Carlos. Now, as President Duterte seeks an escape from the public eye, he is being chased by the ghosts of his victims and the mothers fighting for justice for their slain children.

Llore Pasco lost her sons in May of 2017. On May 11th, her son Crisanto had gone out to apply for a security guard’s license. He would never come home. That same day, Pasco’s other son Juan Carlos also went missing.

After hours of agonizingly searching for her sons, Pasco learned that they had been killed in a police operation after sustaining over a dozen gunshots each. The previous year, the two brothers had voluntarily “surrendered” to their village chief, as part of the government’s drug war. Five years later, Llore Pasco is still searching. This time, not for her sons’ lifeless bodies, but for justice for the atrocities her sons went through.

In the beginning, Pasco was scared to pursue accountability against the police who killed her sons. Her family did not have the money or resources for a prolonged legal battle, and she feared retaliation against her or her relatives. Eventually, she met campaigners at Rise Up for Life and for Rights (RiseUp). She became inspired by the fact that a group of people who had never known Crisanto and Juan Carlos were so passionate and dedicated to helping her attain justice for them, and soon agreed to join the fight as she did not feel alone.

“Let’s not be scared,” Pasco says, “because the more we fear them, the more they will try to intimidate us.”

Llore views her sons as not just victims of a brutal murder at the hands of state forces, but also of a system which failed to give them a fair chance at a life.

Both her sons had difficulties searching for jobs that could adequately support them and their families. This failure by the government to provide economic rights soon turned into a failure to provide their right to health as well. Llore describes her sons’ past stint with drug use as an issue of health, of free and genuine rehabilitation. But the only treatment they received was from the barrel of a gun.

“Killing is not the solution to drugs, but rehabilitation,” Pasco says. The experience of her sons in struggling with job security and receiving inadequate medical support informs her future hopes.

With RiseUp, Pasco continues to fight for social justice. They hope for a government that focuses on the needs of the many, and not just of the elite class which incoming president Ferdinand Marcos Jr. is from. RiseUp also hopes for an economy with more secure jobs, higher wages, and care for the poor. Additionally, they look for a government that would address the needs of senior citizens, solo parents, and persons with disabilities. Pasco says these groups were not given sufficient attention by the Duterte government and the higher pension she was promised had not been given.

Both Llore and Rubilyn have stressed the importance of international solidarity and have called on the global community to take action to ensure that President Duterte and other rights violators are held liable.

With these demands, Pasco hopes for a country where people do not face a similar position as her sons’. “I will not give up,” she says of her plans to continue her pursuit for justice and accountability.

At the end of his term, President Duterte is facing the possibility of a case in the International Criminal Court (ICC) for crimes against humanity in the drug war. Pasco’s story and testimony will be included in the ICC investigation. She fears that the incoming Marcos administration will shield the president from international authorities. This sentiment is echoed by Rubilyn Litao, coordinator at RiseUp. “The incoming Vice President Sara Duterte, daughter of the outgoing President Duterte, will not let her own father be imprisoned.”

Both Llore and Rubilyn have stressed the importance of international solidarity and have called on the global community to take action to ensure that President Duterte and other architects of rights violations are held liable. Aside from work at the ICC, they hope for the passage of the Philippine Human Rights Act, a bill in the United States (U.S.) Congress which aims to end security and military assistance by the U.S. to the Philippines on the grounds of human rights violations.

Their willingness to fight with her for her sons motivates Pasco to continue the struggle. Despite the fact that the incoming Marcos-Duterte administration will act as a significant obstacle against the prosecution of President Duterte, Llore Pasco will not cease in her quest for justice. She asks that the international community will not stop either.

Calvin Manahan is a student at UC San Diego studying Political Science and Human Rights. He joined IBON International as an intern to further his understanding of the political and socioeconomic realities in the Philippines as well as pursue his passion for human rights advocacy.