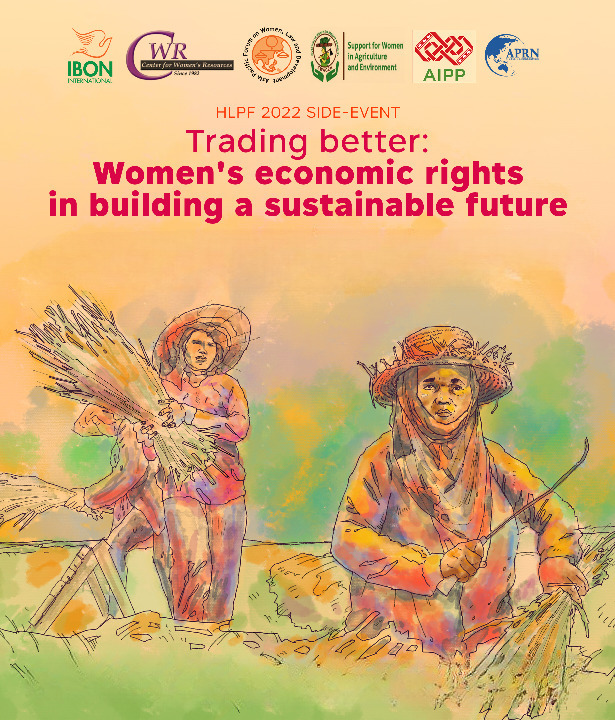 In an official side-event parallel to the United Nations High-level Political Forum on Sustainable Development, women activists and development workers voiced their concerns on the impacts of the multilateral trading system, under the World Trade Organization (WTO), on women’s rights in the global South.

The side-event, “Trading better: Women’s economic rights in building a sustainable future,” was held on 6 July 2022. The speakers included Gertrude Kenyangi of IBON Africa and Support for Women in Agriculture and Environment (SWAGEN); Pragyaa Rai of the Asia Indigenous Peoples Pact (AIPP); Azra Sayeed of the Asia Pacific Forum on Women, Law, and Development (APWLD); and Melinda St. Louis of Public Citizen. Cham Perez of the Centre for Women’s Resources (CWR) served as the moderator of the discussion.

Drawing from the situation of their respective countries, the speakers showed that progress on gender equality, the fifth of the Sustainable Development Goals, has been piecemeal and sporadic. Prevailing corporate, patriarchal power structures have restricted women’s participation in economic life and control over resources. Landlessness of rural women in the global South, for instance, was cited as a clear indicator of the lack of progress. For instance, in Pakistan, “64% of agricultural land is held by only 5% of families. Women have less than 2% [of land],” Azra Sayeed cited.

The speakers also criticised the WTO’s work on trade and gender as a “pink window dressing” to its role in deepening global inequalities and exploitation. Supporting women’s economic rights in paper, the WTO’s actual policies continue to privilege corporate interests and fails to address the adverse impacts on women.

“Neoliberal trade policies throw women, who have historically suffered marginalisation and disinheritance, to the ravages of market forces without safeguards,” Gertrude Kenyangi said.

“We need to amplify women’s voices–especially small farmers and fisherfolk, Indigenous Peoples in forging and reviewing economic and trade policies, and to include gender-specific concerns in policy considerations.”

“The WTO’s failure,” Melinda St. Louis said, “to deliver an emergency waiver of intellectual property rules impeded governments around the world from scaling up COVID-19 vaccine production.” An inequitable distribution of vaccines has disproportionately affected Black, Indigenous, and women of colour in precarious and low-income jobs, especially in the global South. In April 2022, only 15.2% of the populations of low-income countries received at least one dose of vaccine.

St. Louis also criticised the undemocratic process of the negotiations at the WTO’s 12th Ministerial Conference. She highlighted that developing countries were strong-armed into deals and decisions that favour Northern-based big corporations. For instance, the extension of the e-commerce moratorium lobbied by the United States, the United Kingdom, and the European Union will continue to exempt electronic transmission or data flows from customs duties, a loss of revenue for developing countries. Serving as a tax-free holiday for Big Tech, the moratorium takes away income that developing countries could have used for pandemic responses and national development priorities.

In addition, so-called “WTO reforms,” such as through proposed Joint Statement Initiatives, only solidify undemocratic practices of the organisation. Pragyaa Rai asserted the “need to amplify women’s voices–especially small farmers and fisherfolk, Indigenous Peoples.” She said these women’s voices are necessary “in forging and reviewing economic and trade policies, and to include gender-specific concerns in policy considerations.”

Lastly, the discussion highlighted the urgency of systemic shifts. “We need a systemic transformation,” according to Cham Perez, “that will put the welfare and wisdom of women, girls, non-binary people, Indigenous peoples, workers, and other marginalised groups at the centre of global economic policymaking. We need a different model, a multilateralism that is based on solidarity, democracy, and human rights.”