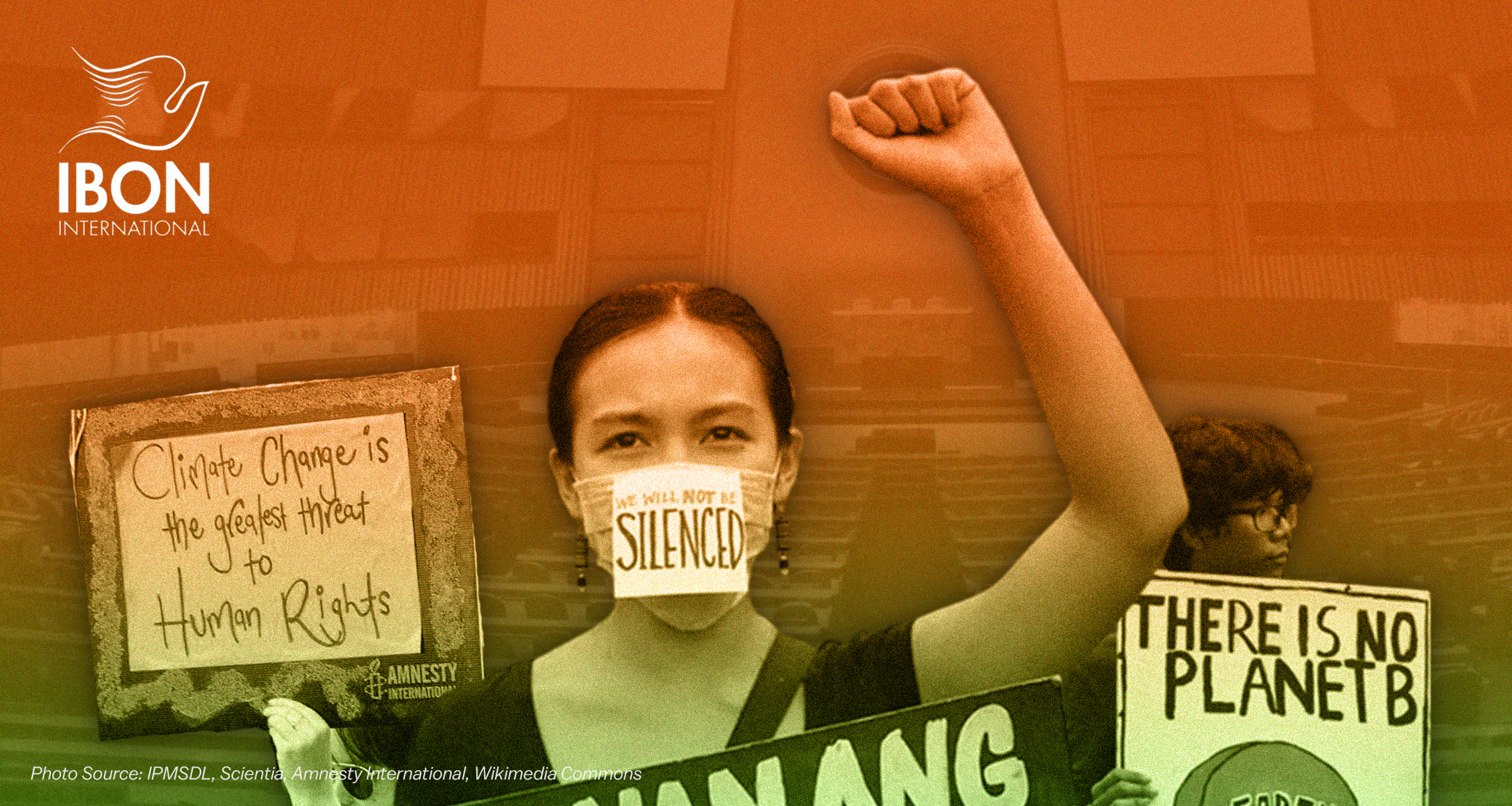 For climate action to be truly transformative, it must be guided by relevant human rights norms and principles. By failing to use rights-based approaches to address the fundamental causes of climate change, governments are likely to implement false and unscientific solutions that violate human rights.

IBON International welcomes the Special Rapporteur on Human Rights and Climate Change’s report on the promotion and protection of human rights in the context of climate change, at the 77th Session of the United Nations General Assembly (UNGA 77). We believe this is a step forward towards aligning climate policymaking and governance with broader human rights instruments and norms.

Over the years, the challenges to human rights have only worsened due to climate change and its disproportionate effects on marginalised groups across the world. Despite contributing the least to the climate crisis, workers, landless farmers, small fisherfolks, women, children, migrants, and Indigenous Peoples from the Global South are paying for the economic, social, and environmental costs of a warming planet. Thus, for climate action to be truly transformative, it must be guided by relevant human rights norms and principles, encompassing the rights to development, health, food, water and sanitation, free, prior, and informed consent, as well as ecosystem integrity, gender equality, women’s empowerment, intergenerational equity, among others.

Duty bearers, however, fail to uphold their mandate to protect human rights with their continued fossil fuel extraction and consumption, and their refusal to shift to sustainable and equitable energy systems. Through land grabbing and other forms of development aggression, as well as health risks associated with air and water pollution, fossil fuel projects continue to endanger vulnerable communities. Governments need to embark on a rapid transition away from fossil fuel extraction and consumption and deliver on their obligation, under international law, to prevent further harm caused by the climate crisis.

Transition from fossil fuel to renewable energy sources, however, is not enough. There have been significant reports of human rights violations even in the renewable energy sector, such as mega-dams that displace indigenous groups from their lands and disrupt major sources of water. The cost and benefit of breaking free from fossil fuel dependence must be fairly and equitably shared, and such a transition should be framed on states’ duty to respect, protect, and fulfill human rights.

By failing to use rights-based approaches to address the fundamental causes of climate change, governments are likely to implement false and unscientific solutions that violate human rights. Carbon trading, forest offset projects, geo-engineering, and the promotion of mega-dams, biofuel plantations, and nuclear power, allow global North countries and their corporations to continue business-as-usual and greenwash their harmful business practices that pose risks to life, health, access to clean water, food, and culture.

Without the rapid and drastic cuts in greenhouse gas emissions, poor nations and vulnerable communities will experience ever more worsening loss and damage caused by more frequent weather extremes such as heatwaves, hurricanes, supertyphoons, and thunderstorms. Heavy flooding in Pakistan this year, for instance, claimed around 1300 lives and at least USD10 billion worth of damage to homes and livelihoods. Across the globe, massive destruction of critical infrastructure, property, supply chains and livelihoods could potentially cost economies almost USD580 billion annually by 2030. More island nations will face the threat of being submerged in rising sea levels and rainforests destroyed by fires and typhoons, placing the lives of around 3.3 billion people, including indigenous communities, at risk.

Stubborn opposition by developed nations, especially the United States and the European Union, to acknowledge liability for their years of emissions that caused climate change as they rose to economic prosperity, constitutes a breach of states’ historic obligation to take affirmative measures to prevent foreseeable long-term harm. To bring human rights into relevance in climate policymaking, top emitting countries must commit to new and separate finance for loss and damage while realising their long-standing commitment to provide predictable, needs-based public finance to support mitigation and adaptation action in developing countries and prevent even more loss and damage.

Without the rapid and drastic cuts in greenhouse gas emissions, poor nations will experience more worsening loss and damage caused by more frequent weather extremes. Heavy flooding in Pakistan this year claimed around 1300 lives and at least USD10 billion worth of damage to homes and livelihoods.

The climate crisis is further aggravated by what the Special Rapporteur called a “participation disconnect” where the people’s right to participate in policymaking and governance is rapidly eroded. Between countries, economic, knowledge, and technical disparities hamper developing countries’ effective participation at the Conference of the Parties to the UN Framework Convention on Climate Change to assert their key demands and priorities. Civil society and people’s organisations contend with bureaucratic accreditation processes and are often shut out of negotiation meetings. Meanwhile, big fossil fuel corporations are given space in the annual climate talks to greenwash their crimes against the people and climate.

The annual climate talks are also held in countries where independent civil society actions such as meetings or protests are severely restricted, if not prohibited. Concerns are already being raised by human rights groups that climate justice activists may face recrimination, harassment, or reprisal if they are involved in protests during COP27 in Egypt. The shrinking civic space at the UN climate talks occurs against the backdrop of relentless extrajudicial killings, criminalisation of dissent, and terror-tagging of environmental and human rights defenders all over the world.

To overcome inequities and build long-term peace based on social justice, people’s participation in identifying, planning, and implementing climate and other socio-economic policies at all levels of governance must be ensured. Robust and independent accountability and redress mechanisms are critical to prevent, investigate, and address human rights violations against environmental and Indigenous Peoples’ rights defenders.

We call on governments, world leaders, institutions, and all development actors gathering for UNGA77 to fulfill their human rights obligations by addressing the climate crisis. Climate policies and actions must reflect further integration of human rights norms and instruments, and other social principles. It is imperative to bolster ambitions to cut down on emissions and reject false solutions, provide new and additional finance for adaptation, mitigation, and loss and damage, defend environmental and rights defenders, and ensure participatory climate policymaking and governance.

We urge people and other civil society organisations to continue campaigning and advocating for decision-makers to protect human rights and place people at the front and center of climate action. #