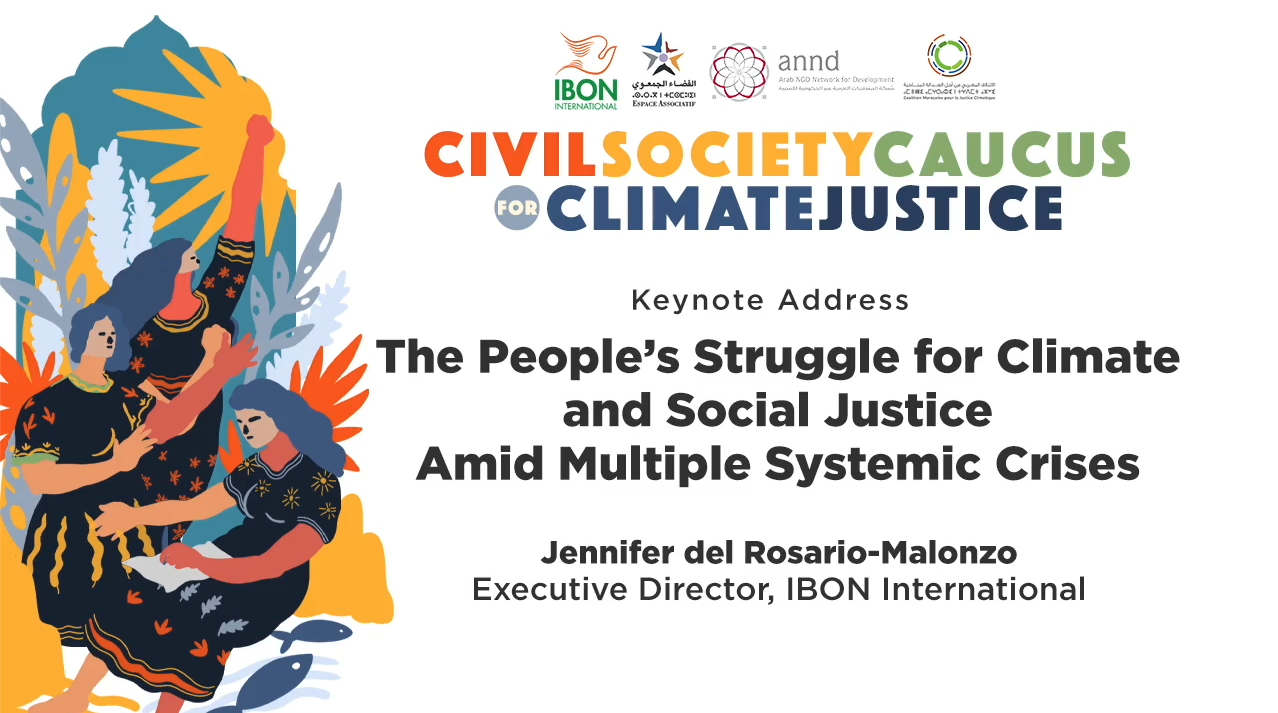 This was delivered by IBON International Executive Director, Jennifer del Rosario Malonzo, as a keynote address to the Civil Society Caucus for Climate Justice held in Rabat, Morocco on 19-20 November 2022. The Caucus was co-organised with the Arab NGO Network for Development, Espace Associatif, and Moroccan Coalition for Climate Justice.

Throughout the year, poor and marginalised communities in the global South have borne the worst of climate change and its impacts. In Pakistan, severe floods due to intense monsoon rains have displaced at least 33 million people and killed thousands. It destroyed 4 million acres of land, and caused damages worth USD 30-35 billion. The Middle East and North Africa region is warming twice as fast as the global average, increasing the risks of food and water insecurity. The intersecting impacts of climate change and conflict are driving people to migrate in other areas within the region where they are forced to take on low-wage and insecure jobs, or else in other continents where they face the violent discrimination engendered by racist border policies. In October, tropical storm Nalgae hit the Philippines, killing hundreds of people and displacing millions. Farmers, who have been struggling with the steep costs of fuel and farm inputs and the damaging impacts of neoliberal policies to the local agricultural industry, have suffered losses estimated at USD 52 million.

Southern peoples face climate impacts amid multiple systemic crises. Decades of neoliberal policies that have slashed wages, reversed workers’ rights, gutted health, education, and other social services, and destroyed local industries and agriculture have driven millions, especially women and girls, into poor and precarious living conditions. Yet to recover from the pandemic and its impacts, people are struggling with soaring food and energy prices driven by the conflicting interests of global powers involved in the war in Ukraine. Meanwhile, the profits of the seven biggest fossil fuel companies, including Shell, ExxonMobil, and Chevron, have surged to USD 173 billion.

The US and other global powers continue to stoke war and conflict to pursue their economic and geopolitical interests. Tens of thousands of people have been killed and millions have been displaced in the conflict in Ukraine dominated by the US backed-NATO and Russian powers. Since 2001, the US War on Terror waged in MENA and the rest of the global South has killed over 900,000 people and displaced 38 million in Afghanistan, Pakistan, Iraq, Syria, Libya, Yemen, Somalia and the Philippines. Wars significantly contribute to carbon emissions, and aggravate the climate crisis with the use of weapons that destroy land, water bodies, and ecosystems. The US military is known as the world’s largest institutional consumer of petroleum and the largest institutional emitter of greenhouse gases. It produced around 1.2 billion tonnes of carbon emissions between 2001 and 2017, with 400 million of those tonnes directly accountable to the post-9/11 wars.

We hope to raise people’s urgent demands: for equitable fossil fuel phaseout, grants-based climate finance, additional finance for loss and damage, and upholding and protecting the rights of land and environmental defenders.

Peasant and Indigenous Peoples’ communities are also militarised and displaced to facilitate corporate resource plunder and exploitation. According to the latest report by Global Witness, since 2012, over 1,733 land and environmental defenders, majority of whom are Indigenous Peoples, have been killed for defying corporations and defending their rights to land and self-determination.

In COP27 in Sharm El Sheikh, Egypt, we witnessed rich, polluting countries shirk their historical responsibility to address the climate crisis. They pushed back on urgent issues such as climate finance for the adaptation and mitigation needs of vulnerable communities, and additional finance for loss and damage; while promoting false solutions that greenwash corporate plunder and exploitation, and further ecological destruction and the climate crisis. The participation of Southern people’s organisations and civil society have been hampered by limited resources and capacities and a global trend of closing civic spaces.

We co-organised the CSO Caucus for Climate Justice with the Arab NGO Network for Development, Espace Associatif, and the Moroccan Coalition for Climate Justice to provide space for people’s organisations and civil society, especially those who were unable to participate in the COP27 in Egypt, where we could tackle the interlinked climate and socioeconomic crises that we face. We hope to surface grassroots analyses of the climate crisis, and its impacts and consequences to human rights and development in the global South. We hope to conduct independent civil society actions, and raise people’s urgent demands: for equitable fossil fuel phaseout, grants-based climate finance for the adaptation and mitigation needs of vulnerable communities especially in the global South, additional finance for loss and damage, and upholding and protecting the rights of land and environmental defenders. The Caucus also aims to develop initial strategies for conducting coordinated action and mobilisation of civil society for COP28 in Dubai, UAE next year.

The Civil Society Caucus for Climate Justice situates itself within the broader effort of the global climate justice movement to build enabling spaces for alternative articulation of common messages and action to challenge the UN climate negotiations. We hope to contribute to social movements by amplifying their demands and calls for system change, which is the basis for climate and social justice.

From New York to Santiago de Chile: Navigating the road to climate justice