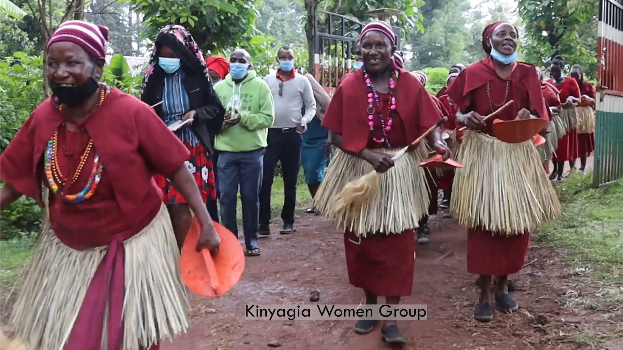 Sustainable Consumption and Production, in the discourse of the sustainable development goals, is about “resource and energy efficiency, reducing pollution and degradation in the whole life cycle.”

For IBON International, this mainstream approach to sustainable consumption and production needs to go further in interrogating broader economic systems and norms at the backbone of societies. IBON Africa worked[1] with the peasant formation Friends of Katuk Odeyo, Ogiek Indigenous Peoples, and the Kinyagia Women’s Group in Meru County. The organisations and groups shared their community-level realities when it comes to resource control and their efforts to assert sustainability.

Friends of Katuk Odeyo’s work on community agriculture and health

Friends of Katuk Odeyo (FOKO), a community-based organisation, operates in a locale characterised by galley erosion, tribal clashes, as well as high rates of HIV infections and of child mortality.

The work of FOKO includes involving community members and small-scale farmers in beekeeping, agroforestry, water harvesting, agricultural production, and table banking. The work of FOKO has generated changes in agricultural practices, for instance, soil testing and crop rotation are now practiced. These changes allowed the community to increase their incomes from crops favoured by their semi-arid climate, such as cassava and ground nuts. FOKO also works on health issues, from nutrition programmes, supporting affordable and quality health care, and even health programmes for HIV-positive community members.

To augment their interventions, FOKO organised dialogues in different policy spaces. FOKO members emphasise the need for strong advocacy among the farmers and community members especially on environmental conservation and restoration practices. Andrew Lawrence Odhiambo, the chairperson of FOKO, highlighted the continuing work with communities on people’s rights and asserting resource control.

The Kenyan government has undermined the Ogiek’s life in the forest. With demolished homes, schools, hospitals, and places of worship, the community is being denied their rights as enshrined in the 2010 Constitution of Kenya. Big businesses have employed state violence to facilitate land and resource grabbing in communities, forcibly detaining opposing voices.

Living in Kenya’s Mau Forest, the Ogieks are Indigenous Peoples who practice traditional hunting and gathering. However, the government has been trying to evict them from their ancestral land. The evictions started in 2017, despite a ruling by the African Court of Human and Peoples’ Rights, in the same year, that recognised the Ogiek’s ancestral lands in the Mau Forest. Unfortunately, the court does not have direct enforceable jurisdiction in Kenya. Despite the Ogiek’s sustainable practices, the government falsely claimed that the people have contributed to the degradation of the Mau Forest.

The displacement of the Ogiek people from their ancestral lands have led them to adopt beekeping for honey production as an alternative source of livelihood. They apply indigenous practices in their beekeeping to ensure the conservation of the forest and other natural resources. The Ogiek people have documented their traditional and sustainable practices, such as in natural resource management, in the context of their indigenous struggle for land and self-determination.

The Kenyan government has undermined the Ogiek’s life in the forest. With demolished homes, schools, hospitals, and places of worship, the community is being denied their right to access education, healthcare, shelter and worship as enshrined in the 2010 Constitution of Kenya. Corporations have exploited the situation. Tea corporations have attempted to buy off community members to facilitate big business intrusion into ancestral lands, sowing disunity in attempts to undermine the local fight against illegal and forceful evictions. Big businesses have employed state violence to facilitate land and resource grabbing in communities, forcibly detaining opposing voices.

What unites women in Meru is the ever-present hope of liberation through organising and educating themselves and resisting existing patriarchal and unjust economic systems.

Though they are the major agricultural producers in their community, the women in Meru County face discrimination in accessing agricultural extension services, credit facilities, and land titles. Women’s socio-economic status in Meru, like in many other communities across the country, is subject to their marital status. Their control over land, which is the basic means of agricultural production, is based on their obligations as wives and mothers. Six out of the ten poorest people in Kenya are women, who must, as the primary family caretakers and producers of food, shoulder the burden of tilling the land, grinding grain, carrying water, and cooking. This unjust burden shows the importance of organising women groups in Kenya.

In Meru County, a vibrant group of elderly women have organised themselves into an active environmental and cultural group. The Kinyagia Women’s Group is well-known for their efforts and initiatives on environmental conservation. The group engages in reforestation and afforestation projects, and cultural performances to raise peoples’ awareness. What unites women in Meru is the ever-present hope of liberation through organising and educating themselves and resisting existing patriarchal and unjust economic systems.

Towards sustainable consumption and production in Kenya

Through peoples’ self-organisation and state accountability, communities could move even further in asserting their rights—from their right to their land, resources, and even social services—as they promote sustainable consumption and production.

For IBON International, a People-Powered Sustainable Consumption and Production framework means: 1) the protection and advancement of people’s rights in the whole production and consumption cycle; 2) promotion of self-sufficiency from the community to the national level; 3) promotion of social innovations and community actions; 4) and holding governments and corporations to account.

Community-led actions need to be encouraged and supported as they directly benefit communities. At the same time, public participation in governance remains important. Policy dialogues with local governments are avenues for policy recommendations, originating from peoples’ demands and in support of communities’ independent initiatives.

National and local or county governments of Kenya have to enact laws for the real recognition, protection, and fulfillment of the rights of indigenous communities. For instance, for the Ogieks, after the ruling of the African Court on Human and People’s Rights, government must ensure that communal land ownership will be protected. Through continued peoples’ self-organisation and state accountability, communities could move even further in asserting their rights—from their right to their land, resources, and even social services—as they promote sustainable consumption and production. #

[1] IBON Africa, in partnership with the International League of Peoples’ Struggle (ILPS), conducted workshops and policy dialogues on people-powered sustainable consumption and production (PP-SCP) in communities in Kenya last December 2021. Watch a video on the realities and struggles of FOKO, the Ogiek Indigenous Peoples, and Kinyagia Women’s Group towards people-powered sustainable consumption and production.

On engaging the private sector for development and the Kampala principles

Justice for the farmers, land rights defenders in the global South!