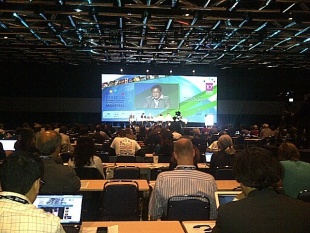 [[{“type”:”media”,”view_mode”:”media_large”,”fid”:”125″,”attributes”:{“alt”:””,”class”:”media-image”,”height”:”233″,”style”:”width: 310px; height: 233px; margin: 10px; float: right;”,”typeof”:”foaf:Image”,”width”:”310″}}]]
BetterAid together with IBON addressed the fast-unfolding issues of Rio+20 and Green growth and climate financing by conducting two engagement workshops at the recently-concluded Civicus World Assembly 2011.
BetterAid co-chair and IBON International Director Antonio Tujan Jr. led a delegation at the 2011 annual assembly of Civicus, an international alliance of civil society organizations, held in Montreal, Canada last 10-12 September. The global gathering was attended by civil society organizations (CSOs), donors, governments, and businesses.
The first workshop, entitled “Voices and Perspectives on Rio+20 and Green Growth,” was held on 10 September to discuss possible transitions to Green economy—a major agenda point at the United Nations Conference on Sustainable Development, also called Rio+20, slated for June 2012 in Rio de Janeiro, Brazil. The second workshop discussed climate financing, which will be a major question up for resolution at the UN Framework Convention on Climate Change’s COP-17 meeting later this year in Durban, South Africa.
IBON’s Tujan also took part in the global assembly’s Second Plenary Session on 11 September, entitled “Global Decision Making: Moving the margins to the centre,” by giving a presentation that emphasized the mandatory inclusion of civil society stakeholders in official decision-making processes. [A copy of his speech will be posted on this site soon.]
In the workshop on Rio+20 and Green growth, CSOs discussed the various concepts of a Green economy, the challenges in pursuing various paths of transition to such an economy, and the various policy proposals as concrete steps in pursuing such paths. The issue of Green growth has been lined up as a major agenda for Rio+20, which will mark the 20th anniversary of the 1992 Earth Summit during which sustainable development commitments were formulated to combat the global socio-economic and ecological crises.
Anselmo Lee of Korea Civil Society Forum on International Development Cooperation (KoFID) talked about what is at stake in Rio in 2012, while the overview and policy proposals for green growth were tackled by Laura Martin of Sustain Labour. Gilbert Sape of the Pesticide Action Network Asia Pacific (PANAP) delivered Asia-Pacific CSO messages for Rio+20. The presentations were followed by an open forum moderated by Jennifer del Rosario-Malonzo of the Reality of Aid Network.
The workshop on climate finance, with 38 participants, provided a space for CSOs to discuss and critique the current system of climate finance, the proposal for a Green Climate Fund (GCF) that’s expected to be undergo intense discussion at COP-17, and the World Bank’s role in climate financing. Workshop participants called on civil society to remain vigilant, and be more engaged in formulating the GCF and its policies in order that it truly serves the climate action needs of developing countries based on the principle of “common but differentiated responsibility.”
Bodo Elmers from the European Network on Debt and Development (Eurodad) gave the welcome remarks and served as the workshop moderator. Emele Dituturiaga of PIANGO (Pacific Islands Association of Non-Government Organisations) gave an overview of climate finance issues, while Reality of Aid-Africa’s Vitalice Meja presented a critique of the GCF. The labour sector’s perspective on climate finance was discussed by Laura Martin of Sustain Labour.
More information about BetterAid, an open platform of civil society organisations working for better aid and development effectiveness, is available at http://www.betteraid.org/.
Tags: BetterAid, CIVICUS, CSOs, GCF, RIO+20, Tujan, workshop