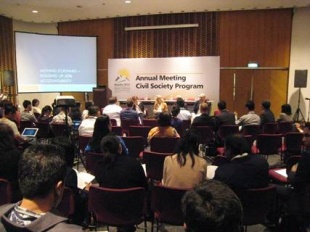 MANILA—On the last day of the 45th Annual Governors Meeting of the Asian Development Bank (ADB) in Manila, civil society organizations met with the Bank’s staff to discuss about the new accountability mechanism.
[[{“type”:”media”,”view_mode”:”media_large”,”fid”:”72″,”attributes”:{“alt”:””,”class”:”media-image”,”height”:”232″,”style”:”width: 310px; height: 232px; margin: 10px; float: right;”,”typeof”:”foaf:Image”,”width”:”310″}}]]
ADB recently reviewed its accountability mechanism in 2011 and the new policy will be implemented in May 2012. During the dialogue, Hemantha Withanage of the Centre for Environmental Justice in Sri Lanka raised concerns on the new mechanism as well as on the process of the review. In particular, she stressed the need for these policies and mechanisms to be understood by those on the ground, as well as the need for independence in the mediation process.
The ADB staff acknowledged the weakness in providing information to the public, as well as the need to collaborate and reach out to governments on the issue of accountability.
Brenda Killen of the Organization for Economic Co-operation and Development (OECD), stressed mutual accountability and country ownership as critical to development results. She also stressed that ADB’s accountability mechanism should not undermine the accountability of the country.
Meanwhile, Antonio Tujan Jr. of IBON International, also co-chair of BetterAid, challenged the ADB to pay more attention to the human rights impact of the bank’s development projects as well as their social accountability. He said that the accountability mechanism was a welcome initiative, despite its flaws.
Tujan stressed, however, that “accountability is not just about a complaint mechanism, not about solving problems, but about delivering results”. In this framework, he said, accountability builds its foundation on how people and civil society can take the ADB and their governments to account for human rights, and ADB being accountable to the partner country and most importantly to the people who are directly affected by its development projects.
Situating accountability within this framework provides a solution to most of the major concerns raised by civil society on ADB’s accountability mechanism – such as the conflict between ADB’s policies and respect for national sovereignty, and non-disclosure of information on the private sector when deemed necessary, among others, he added.
Tujan ended with a call for ADB to really develop inclusive partnerships, especially with civil society, as an important measure to strengthen transparency and accountability.
The 1.5-hour dialogue was co-organized by the Reality of Aid Network-Asia Pacific and the ADB NGO Center. ###
Tags: accountability, ADB, private sector, ROA-AP

The Myth of Migration for Development (July-August 2009)