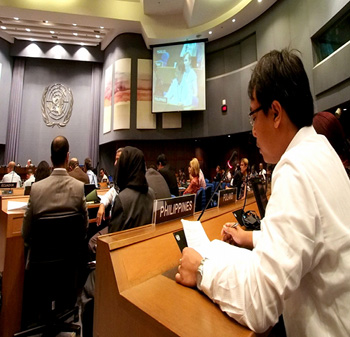 [[{“type”:”media”,”view_mode”:”media_large”,”fid”:”68″,”attributes”:{“alt”:””,”class”:”media-image”,”height”:”337″,”style”:”font-size: 12px; width: 350px; height: 337px; margin: 10px; float: right;”,”typeof”:”foaf:Image”,”width”:”350″}}]]
(BANGKOK, August 30, 2012) — Hopes for meaningful outcomes that would lead to collective efforts by the international community to address climate change were echoed by developing countries at the opening of the international climate negotiations at the UNESCAP in Bangkok, Thailand.
Over the next week, the Bangkok Intersessionals will see intense discussions on contentious issues around the Durban Platform, which calls for a second period of commitments under the Kyoto Protocol (starting January 1, 2013 and ending on December 31, 2017 or 2020) for developed countries to reduce emissions of greenhouse gases.
At the opening plenary Madame Rose Diouf, Chair of the Ad hoc Working Group on Kyoto Protocol (AWG-KP), welcomed delegates and said that as it was just a few months away from the UNFCCC Conference of Parties (COP) 18 in Doha, Qatar, Parties need to successfully complete the work and “start exploring areas of compromise as to reach a solution.”
Strong statements were delivered by the G77/China as well as by other groups, to highlight the urgency of finding a resolution to the current debates at the negotiations. Some of the key areas of contention include: (a) low levels of ambition reflected as global goals for reduction of emissions;  (b) a disagreement over having a 5-year or 8-year second commitment period of the Kyoto Protocol (2KP); and (c) legal and political issues pertaining to the transition period, among others.
The Africa Group raised its concerns over attempts to have low levels of ambition for the 2nd commitment period of the Kyoto Protocol, and appealed for Parties to take a holistic approach in dealing with all related issues.
The Alliance of Small Island States (AOSIS) said that results of the climate negotiations must be ambitious, credible, and inspirational to the international community. It must also address unresolved issues around ambition (which are inadequate and inconsistent with the 1.5-degree temperature increase that science says is the limit to prevent catastrophic climate change), and stressed that even a higher level of ambition is still “economically feasible for all Annex 1 countries.”
The Least Developed Countries (LDCs) meanwhile called on developed country Parties to submit their mitigation pledges (referred to as QELROS or Quantified Emission Limitation and Reduction Objectives) and stressed that the adoption of a second commitment period under the Kyoto Protocol was not only a political imperative but a legal obligation as well.
The Arab Group stated that the Kyoto Protocol is one of the main foundations of the global effort to address climate change. Durban reached an agreement for a second commitment period, and therefore it is necessary for Annex 1 countries to establish their commitments. Parties who withdrew from a second commitment period under the Kyoto Protocol must also be asked to provide ambitious targets for emissions reductions.
Meanwhile, Venezuela, speaking for the Bolivarian Alliance for the Americas (ALBA), reminded Parties that every treaty is binding and must be performed in good faith.  It challenged developed countries to honor their historical responsibilities in solidarity with humankind and with Mother Earth, and that now is an historic moment to show worldwide leadership in the face of adversity. The ALBA countries also had this to say to developed country Parties as regards the Durban Package: “It is not realistic nor ethical to think to ask of others what we are not willing to do ourselves.”
The BASIC (Brazil, South Africa, India and China) countries expressed concern over the level of ambition, which is far below what is required by science from Annex 1 countries. It called on developed country Parties to “enhance the environmental integrity” of the Kyoto Protocol’s 2nd commitment period. Similarly, the Coalition of Rainforest Nations, i.e., developing countries with rainforests, urged Parties to secure a “solid and ambitious agreement in Doha.”
The statement delivered by Philippines on behalf of the Like-Minded Developing Countries (LMDC), a group of 36 countries from developing countries, drove home the message that a meaningful, substantial and effective Kyoto Protocol 2nd commitment period should be the centerpiece and focus of work for the Bangkok Intersessionals, and that Kyoto Protocol should be the “key deliverable” for Doha. It stressed the need for ambitious aggregate emissions for Annex 1 countries in accordance with historical responsibility consistent with science, and warned of already low pledges (of developed countries) possibly being undermined by accounting loopholes that would ultimately result in no net contribution to emissions reduction.
At around midday, groups from different organizations and social movements from Thailand and different parts of the world held a demonstration in front of the ESCAP building. The groups called on the rich industrialized countries to fulfill their existing legally binding commitments and undertake drastic emissions cuts without offsets and loopholes. ###
_______________________________________________________________________
Photo credit: Undersecretary Segfredo Serrano of the Philippines' Department of Agriculture
Tags: Bangkok Intersessional, climate change, Durban Platform, G77, Kyoto Protocol, UNFCCC