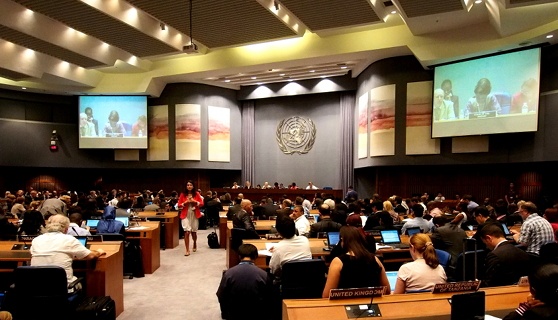 with the impacts of climate change. This seems to be the undercurrent yesterday at the Bangkok Intersessionals of the United Nations Framework Convention on Climate Change (UNFCCC).

At the Contact Group meeting for finance, developed countries, particularly
the Umbrella Group composed of the US, Australia, New Zealand, Canada, Japan and supported by the European Union, Switzerland and Mexico, raised a number of procedural questions for continuing to tackle climate finance at the Ad Hoc Working Group on Long-term Cooperative Action (AWG-LCA). Arguing that every finance issue has an appropriate forum where each of the different finance issues can be addressed, they put forward the view that the LCA’s work on finance should end this year, as mandated by the Durban outcomes. Having a number of meetings on finance at the LCA, to these countries, is a “misallocation” of time.
Developing countries are pushing for more substantive discussions on finance at the LCA since, as Bangladesh has put it, there are a lot of “creative ambiguities” in the climate negotiations and there needs to be a basic understanding at the political level of what is really meant by issues such as scaling, sources, resource mobilization and allocation of funding.
Korea said that efforts by developing countries to raise resources should be recognized and encouraged. Reminding everyone that the Conference of Parties (COP) has a mandate to “mobilize global efforts in a most effective way,” it pushed for the effective use of financing for policy implementation so that countries can change their systems of subsidies and pay more attention to market mechanisms to reduce emissions, as well as in research and development in green technologies. Mr. Aysar Tayeb, Chair of the AWG-LCA, said he did not understand exactly the point that was being made by Korea.
The Philippines, speaking for G77/China, said that while it recognized that the LCA has laid out the institutional arrangements necessary, the work of the LCA was not yet finished for financing to move forward in a balanced and comprehensive manner. There remain a number of gaps in the implementation that are yet to be addressed and similar concerns have been raised by other developing countries. Citing as an example the Green Climate Fund (GCF) that was established under the COP, the LCA would still have to provide the parameters in the relationship between the COP and the GCF.
Colombia, speaking on behalf of Chile, Costa, Rica, Peru and Colombia, mentioned that the issue of midterm finance had not been elsewhere addressed elsewhere and that the LCA needed to make sure that there is no gap related to the provision of resources after the end of the Fast Start Finance (FSF) period.
Ecuador stressed that it was very important to ensure the robustness and transparency of the financial mechanism of the Convention, and as such, calls for an MRV (measurement, reporting and verification) of support for developing countries to see and agree on the amounts disbursed and areas/actions funded.
Uganda said that when we are talking about finance in relation to climate change, we are talking about the “purchasing power” of developing countries to mitigate and adapt to climate change. As the FSF period is ending, he enjoined Parties to reflect on whether they have mapped out the problems that the FSF was supposed to address and whether lessons have indeed been identified before terminating the LCA. Highlighting the urgency of the situation, Uganda made an appeal and said “we are dying in the LDCs (least developed countries), can’t the issues be resolved here?”
The Philippines reminded Parties that the LCA mandate from the Bali Action Plan was to “continue to work for one year pursuant to an agreed outcome, at which time it will terminate its work.” According to Ms. Bernarditas Muller, “climate change is important, and financing is too important, but what we’ve had are voluntary channels of financing, loans, investments. We have set up institutional arrangements, but do we know how to allow these mechanisms to do their mandate? I am just a housewife, and I need to finish my work and ensure that everything is clean and clear for the next one.” ###
Tags: Bangkok Intersessional, climate change, Durban Platform, G77, Kyoto Protocol, UNFCCC

Post-2015 negotiations: Are governments passing the buck to businesses?