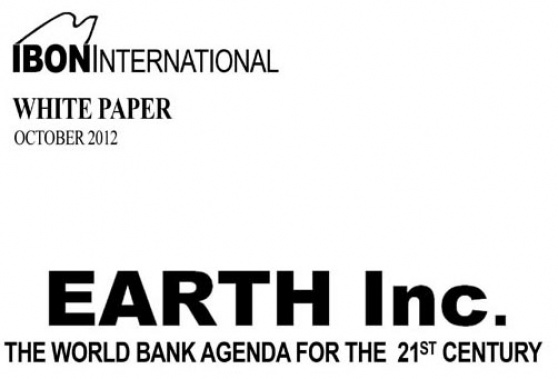 Earth Inc.
The World Bank Agenda for the 21st Century
[[{“type”:”media”,”view_mode”:”media_large”,”fid”:”600″,”attributes”:{“alt”:””,”class”:”media-image”,”style”:”width: 310px; height: 242px; float: right; margin: 5px;”,”typeof”:”foaf:Image”}}]]
Established 68 years ago, the World Bank (WB) remains one of the world’s largest multilateral development finance institutions with 188 member countries. It has a vast personnel consisting of 9,000 employees and consultants spread around the globe in over 100 offices, and an aid portfolio of $57 billion in 2011.
While it professes to reduce poverty, the WB has been criticized for enforcing policies that plunged the world’s poor into deeper poverty, hunger and indebtedness, such as the infamous structural adjustment programs of the 1980s and the Washington Consensus of the 1990s that prioritized private capital and market liberalization.
Moreover, though it counts 188 countries as members, the WB is run by a handful of economic powers whose interests dominate it. Majority of governments that fund it has little oversight over its operations. The United States is the WB’s largest shareholder with 15.85% voting power and the one that chooses the WB president. In 2010, when voting powers were revised to accommodate big developing countries like China, the US Senate Foreign Relations Committee released a report that argued strongly against any dilution of the US veto power, its grip on leadership selection, and its voting share at the International Monetary Fund (IMF) and the WB. Other large shareholders are Japan (6.84%), China (4.42%), Germany (4.00%), the United Kingdom (3.75%), and France (3.75%).
Recent developments in the aid industry seem to diminish the WB’s stature. For example, a 2011 OECD DAC report indicated that multilateral aid has declined as a share of total aid, while private aid flows have dramatically increased. Likewise, other multilateral financing mechanisms such as regional development banks have rapidly expanded their portfolios. But the WB remains influential in development policy, peddling its technical assistance to developing countries and positioning itself as a global ‘knowledge bank’ as it pushes its free­market, corporate-led economic and development framework. It is still a gatekeeper of aid as aid allocations of other donors are heavily influenced by the macro-economic assessments it makes along with the IMF.
Current pronouncements of the WB invariably include “private sector development” and “inclusive green growth” like a mantra promising to dispel poverty and inequality and ushering a better, ecologically healthy world. But what do these WB notions boil down to?
IBON_White_Paper_for_website.pdf
Tags: IBON International, poverty, white paper, World Bank