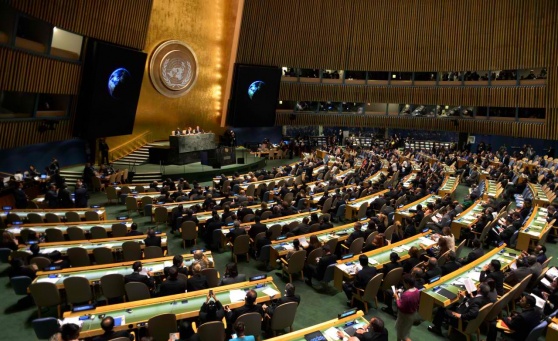 IBON International Updates (2014)
Climate Justice, No. 3
[[{“type”:”media”,”view_mode”:”media_large”,”fid”:”392″,”attributes”:{“alt”:””,”class”:”media-image”,”height”:”293″,”style”:”text-align: center; width: 350px; height: 214px; float: right;”,”typeof”:”foaf:Image”,”width”:”480″}}]]
NEW YORK, 23 September 2014—The United Nations Secretary General’s Climate Summit in New York gathered 122 government heads to unite on the urgency for big, bold and brave actions to tackle climate change.
UNSG Ban Ki Moon opened today’s high-level meeting by stressing that climate change threatens the peace, prosperity and opportunity for billions of people. He reminded everyone that hundreds of thousands who participated globally in the People’s Climate March on September 21 are demanding that leaders take the lead in making history to “set the world to a new course.”
Newly appointed UN Messenger of Peace Leonardo DiCaprio urged the leaders to take action to address “the greatest challenge of our existence on this planet.” He urged the leaders to put a price tag on carbon emissions, and eliminate subsidies for coal, gas and oil companies.  He said that the leaders now face this difficult task and choose to either “make history or be vilified by it.”
The highlight of the summit opening was a poem delivered by Marshall Islands writer Kathy Jetni-Kijiner, which received a standing ovation. She challenged the leaders over their collective climate inaction, and said that climate-impacted communities deserved not just to survive, but to thrive.
What gives, Climate Summit?
A large part of the day-long meeting was dedicated to countries announcing their positions, programs and plans to act on climate change.
Country after country, from Samoa and Tuvalu to Costa Rica and Denmark, declared their commitment to speed up the switch from fossil fuels to 100% renewable energy. Sweden, Trinidad and Tobago, Ethiopia and Iceland pledged to go carbon neutral by 2050. Grenada said all small island states would aim for complete shift to renewable energies.
Pledges and some actual commitment for climate financing were put on the table to support climate action in poorer countries. About USD1.32 billion was pledged for the Green Climate Fund, led by France with USD1 billion, with Czech Republic, Denmark, Finland, Luxembourg, Mexico, Monaco, Norway, South Korea and Switzerland also making commitments. China expressed its commitment to promote South-South cooperation on climate change by doubling its annual financial support to USD6 million for the establishment of a South-South cooperation fund.
A number of states expressed support for a global climate agreement in Paris next year. The United Kingdom said there is a need to raise the level of ambition to achieve a legally binding climate deal.
China shared this position and added three proposals: (a) to stick to the UNFCCC framework, upholding the principles of equity and “common but differentiated responsibilities and respective capabilities” (CBDR-RC); (b) to meet respective commitments made by developed countries in intensifying emissions reduction and fulfilling obligations on finance and technology transfer; and (c) to strengthen actions for the future in that all countries need to follow green and low-carbon development that suits national conditions and actual circumstances.
United States President Obama acknowledged the US’ role in climate change, and affirmed that it is “stepping up to the plate” to combat this.  Towards this, Obama signed an executive order directing federal agencies to begin factoring climate resilience into international development programs and investments. The US is also going to deploy experts and technology to help vulnerable nations better prepare for weather-related disasters and plan for long-term threats.
Bolivia’s President Evo Morales, speaking on behalf of G77 and China—the largest bloc comprising 133 developing countries—said that the international response to climate change must fully respect the principle of equity and common but differentiated responsibility. CBDR means that while all states/countries have the common responsibility to protect the global environment, they have contributed differently to ecological problems, so their responsibility to reduce or control the effects and prevent future occurrences will be different according to their means and capabilities.
Venezuela’s President Nicolas Maduro delivered a stark critique of the capitalist model, saying that it has for decades ignored nature’s capacity to restore itself.  He expressed concern over the so-called Green Economy model that is being promoted as a capitalist solution, and asked if anyone still believed that multinational corporations could change overnight to become the saviors of the planet.  He reiterated the call from the Margarita Declaration of the Social Pre-COP that Venezuela hosted in July, i.e., cambio el sistema, no el clima (system change, not climate change).
The Climate Summit does not have a bearing on the official climate negotiations, the next round of which is set to take place at the forthcoming annual Conference of Parties in Lima, Peru (COP 20) in December this year. But the summit is explicitly aimed at “putting climate change back at the top of the political agenda” after the lackluster COPs of previous years.
Held right after a 400,000-strong People’s Climate March thundered through 80 blocks of New York City streets, the summit appears to have derived extra energy from the gigantic street demonstration. Both events have attracted tremendous media attention worldwide and have certainly combined to “put climate change back at the top of the political agenda”—in the short term.
The question remains, however, in the minds of civil society, governments and other climate justice advocates across the globe: Will the momentum be sustained and provide enough power to break the deadlock in the climate talks, which has stalled climate action in previous years?
Hoping for a breakthrough, all stakeholders are gearing up for Peru COP 20 just two months from now. But the world, especially poor, developing, and small-island countries, cannot wait much longer for continued climate deadlock and inaction.  ###
IBON International Update #3 (Spanish).pdf
Tags: climate change, climate justice, climate summit, UN