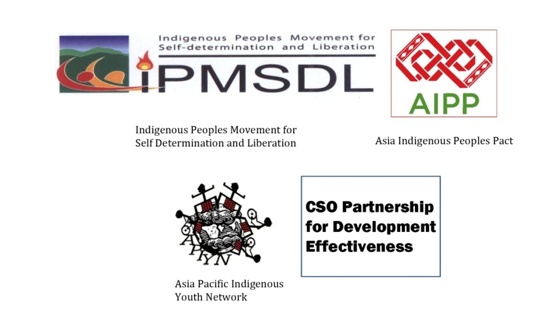 'Collecting the historical debt due us'

[[{“type”:”media”,”view_mode”:”media_large”,”fid”:”437″,”attributes”:{“alt”:””,”class”:”media-image”,”height”:”178″,”style”:”width: 310px; height: 178px; float: right;”,”typeof”:”foaf:Image”,”width”:”310″}}]]
BAGUIO CITY, Philippines (22 April 2013)—Indigenous groups from various countries have decided today to take the first steps towards joining a new global platform on aid and development effectiveness (ADE), noting that their participation in ADE processes have been minimal so far.
Gathered in this mountain resort city for an international workshop on ADE, 36 delegates from indigenous groups and advocates worldwide issued a statement that expressed their intent to participate “as a peoples’ movement” in the CSO Platform for Development Effectiveness (CPDE), and “to collect the historical debt due us.”
The statement was issued in the name of the “International Indigenous Peoples Workshop on Aid and Development Effectiveness,” which was held in Baguio City, Cordillera region, Philippines. The ADE workshop was jointly organized or facilitated by the Indigenous Peoples Movement for Self-Determination and Liberation (IPMSDL), the Asia Indigenous Peoples Pact (AIPP), the Asia Pacific Indigenous Youth Network (APIYN), and the CPDE.
The ADE workshop delegates noted that while indigenous peoples (IP's) have been pursuing movements for IP rights and self-determined sustainable development, which is now a “sustained presence in the global CSO arena,” not many of them engage in the development funding discourse. Thus, overall IP participation in current global processes and debates on ADE remains minimal and unofficial.
“At present, foreign aid and development cooperation exists between states, dominated by the ruling elite, and multilateral agencies,” the IP delegates’ statement said, adding that this “serves the interests of donor advanced capitalist countries and operates under the dominant global capitalist system” while “CSOs like IP organizations are marginalized.”
The statement described “development funding” as fundamentally “a continuation of past colonial exploitation now imposed by donor countries under the scheme of neoliberal globalization,” while the supposed aim of addressing poverty and satisfying basic social needs “remain to be just mere rhetoric.” Development funding in the hands of multilateral agencies like the World Bank, multinational corporations “and our very own governments,” the IP groups said, have been “the scourge of indigenous peoples in development aggression.”
While “mindful of this fundamental flaw and danger,” the delegates said IP’s can view development aid as an opportunity that must not “default to states and big international NGOs” enjoying monopoly over these funds. “We engage based on our needs, … [as we] pursue our own alternative development agenda that is self-determined and sustainable,” they added.
The statement said that engaging in CPDE can be a “forum to advance our IP agenda,” namely:
While IP groups intend to address ADE issues through the CPDE forum, “and may even access official development aid funds,” the delegates said they do not forget “the reality of inequality and exploitation” engendered by development aid. “In fact, it is now time to collect the historical debt due us,” they added. ###
Tags: CPDE, IPMSDL