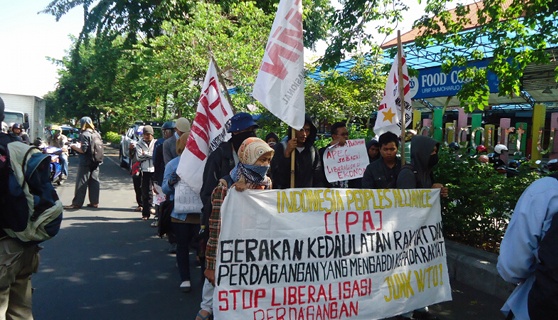 Asian peasant group slams dispersal of anti-trade lib rally
[[{“type”:”media”,”view_mode”:”media_large”,”fid”:”34″,”attributes”:{“alt”:””,”class”:”media-image”,”height”:”178″,”style”:”width: 310px; height: 178px; margin: 10px; float: right;”,”typeof”:”foaf:Image”,”width”:”310″}}]]
The Indonesian Peoples Alliance condemned what it called “the fascist action” of the Indonesian government in arresting four activists and dispersing an anti-trade liberalization rally on April 20.
IPA, a campaign platform of people’s organizations in Indonesia, led the demonstration in Surabaya, East Java, in opposition to the government’s economic agenda for the upcoming Asia-Pacific Economic Cooperation (APEC) Summit as well as the World Trade Organization Ministerial, both slated to be held in Indonesia later this year.
According to IPA, Indonesian police started to harass and arrest the demonstrators an hour after the protest action began. Four activists—identified as Ferdy, Fikri and Muklis, members of the Front Mahasiswa Nasional (FMN, or National Student Front) Surabaya, and Harun from the Forum Komunikasi Pemuda Surabaya (FKPS)—were arrested and detained at the police station. They have not been released as of press time.
Institute for National and Democratic Studies (INDIES) Managing Director Ario Adityo condemned the arrest as a crackdown on activists opposed to the country’s trade liberalization agenda. Adityo said the action exposes the fascist nature of the Susilo Bambang Yudhoyono (SBY)-Budiono government.
Adityo said “this crackdown is a diehard act” of the government to ensure that trade liberalization will flow smoothly in the country, even as trade liberalization is destroying Indonesia’s agriculture and small industry.
IPA insisted that the rally organizers submitted a notice to the Surabaya Police Department a day before the rally. It demanded that the Surabaya police immediately release the four activists, insisting that the protest action was a peaceful and legal activity in line with constitutional rights of citizens.
“This crackdown is a shame for the SBY-Budiono administration, since they promote Indonesia as democratic country to attract foreign capital,” said Ahmad SH of the IPA secretariat.
The Asian Peasant Coalition (APC), which is a member of IPA’s International Committee, has also called on the Indonesian government to release the activists.
Rahmat Ajiguna, APC deputy secretary general and also the secretary general of the Indonesia-based Aliansi Gerakan Reforma Agraria (AGRA), explained that promoting the Bogor Declaration as the framework for the upcoming APEC Summit is expected to pave the way for more trade liberalization in the region. ###
Tags: Indonesia, peasants, rally, trade liberalization

Statement on ICESDF’s session on innovative initiatives and best practices

Upcoming konfrontasi in Bali: Will the world accept a new WTO deal? (July-August 2013)