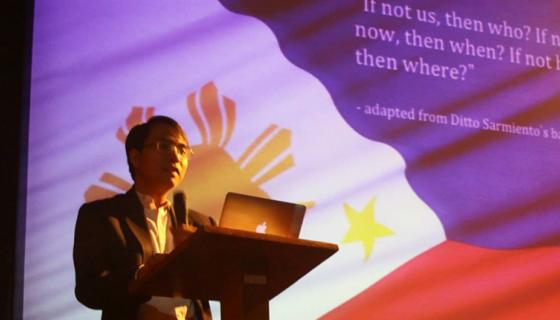 IBON International’s Maria Teresa Nera-Lauron announced that her organization strongly agrees with Mr. Saño’s call for the Warsaw talks to “end the madness” of a few rich countries that continue to renege on their climate commitments amidst the worsening impacts of climate change. IBON is a staunch advocate of global climate justice and has been involved in the COP process.

Ms. Lauron likewise expressed all-out support for Saño’s fasting, which has snowballed among climate activists in and out of the COP talks. Support for his protest gesture has caught fire online through a sign-on community petition on www.avaaz.org.

Saño, who heads both the Philippine Climate Change Commission and his country’s delegation to Warsaw, delivered his impassioned appeal at the opening program of COP 19 on November 11. He also declared a voluntary fast, vowing to continue until significant progress is achieved by G77 countries plus China on developing countries’ demands.

IBON International identified the most contentious issues, on which developed countries such as the U.S. and E.U. have been stonewalling, as greenhouse gas emissions cuts as mandated by the Kyoto Protocol; climate financing mechanisms; and legal liability and funding sources for climate-related loss and damages. More recently, Japan and Australia have also reduced their climate mitigation commitments, further worsening the gridlock in negotiations.

Lauron said the fasting and the online petition—unprecedented for a country delegation head in the climate talks—symbolize the immense sufferings and dangers faced by many developing countries that are vulnerable to extreme weather events and slow-acting environmental problems brought by climate change. “We welcome the fact that many of those who supported the fasting and online petition came from both the global South and global North,” she said.

Lauron noted that the demand for climate justice and the Saño-initiated protest in COP 19 are unfolding amid the tragic aftermath in the Philippines of super typhoon Haiyan—in world history, the strongest ever to hit land—and thus drives home most powerfully the urgent need for climate action especially for the most vulnerable countries such as cyclone-prone, flood-prone, drought-prone, and small-island countries. She noted that Somalia has just been ravaged by a rare cyclone even as the COP 19 talks were ongoing.

Lauron likewise clarified that while the exact correlation between global warming and super typhoons has yet to be established, climate scientists are already agreed that extreme weather events such as super cyclones have become more frequent and more destructive in recent years. “Three such super typhoons have hit the Philippines in the past 12 months,” she emphasized, noting further that Saño’s equally impassioned speech at COP 18 last year also came in the wake of another super typhoon, Bopha, that ravaged the country.

Earlier, IBON International extended its sympathy to the Philippine communities laid prone by super typhoon Haiyan, and issued an urgent appeal to its partners and other civil society groups worldwide to extend aid to the ravaged nation. Ms. Lauron, who is from the Philippines, reiterated the appeal even as she emphasized that IBON’s climate justice advocacy speaks for all developing countries susceptible to climate-related disasters.

“The impacts of the worsening climate change further aggravate the vulnerabilities of the poor and marginalized peoples and communities especially of developing countries such as the Philippines,” she explained.

IBON International said it will help push an international call to fast-track financing for climate adaptation and as compensation for loss and damages, with immediate attention given to the worst climate change-induced disasters.

IBON International reiterated its position, consistent through the past COP climate talks, that one of the founding principles of the UN Framework Convention on Climate Change is the historical responsibility of developed countries such as the U.S. and E.U. in taking the lead to combat climate change and its adverse effects.

The Manila-headquartered international NGO, which operates in various regions of Asia, Africa, and Latin America, also called on all climate advocacy groups and activists to continue their fight beyond COP 19, and unite on the People’s Protocol on Climate Change based on the four principles of social justice, people’s sovereignty, respect for the environment, and common but differentiated responsibility.

“Climate justice can only be achieved by addressing the historical and social roots of the current climate crisis,” Lauron said. “Climate justice must address the needs of those most affected by putting social justice and people’s sovereignty at the center of the global fight against climate change,” she added.##

Statement on ICESDF's session on innovative initiatives and best practices