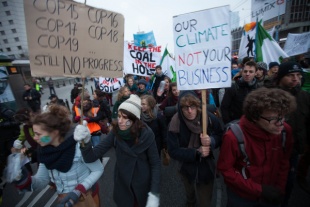 Firmly demanding for binding commitments, civil society and developing countries expressed disappointment over a last-minute proposal that again failed to meet impassioned calls for urgent climate action. The said plan, which is crucial in drafting a comprehensive international agreement for the Paris 2015 climate conference, adopted the term “nationally determined contributions” to replace climate finance commitments, but provided no mechanism to ensure that such “contributions” are actually met.

The diluted language of the conference outcome presents a growing problem for poor countries that are most vulnerable to the adverse effects of climate change. It allows further leeway for developed nations to backtrack on their commitments and effectively weakens the position of developing countries that struggle every year from the damages of climate catastrophes. Furthermore, the Green Climate Fund, a crucial operating body for climate finance, remains filled with empty promises and conservative pledges.
“The devastation in the Philippines should be reason enough for everybody to increase ambition AND action. We cannot afford to be stingy (in commitments) and conservative (in vision),” said Tetet Nera-Lauron of IBON International as she tackled the need for ambitious goals in addressing theimpacts of climate change.
“The world needs drastic and urgent emissions cuts,” she added.
Citing the refusal of developed countries to agree on the substance of an international agreement for 2015 and the overly branded corporate influence seen throughout the summit, civil society representatives staged a massive protest last Saturday to demand for climate justice. Marcin Korolec, COP 19 president and the Polish environment minister, was heavily berated for holding the climate talks parallel to a ‘Coal and Climate Summit.’
Efforts of developed countries to stall negotiations were also criticized following the walkout of G77+China during the loss and damage talks. In addition, Japan reneged from its earlier commitments to cut carbon emissions as Australia followed suit and expressed disinterest in achieving a workable pathway towards a fair and equitable climate agreement.
Despite the tremendous pressure to come up with positive results, the Warsaw climate talks delivered no substantive outcome and instead allowed dirty energy industries to undermine the fundamental objectives of the UNFCCC itself. Indeed, this year’s climate talks attest to the commitments lost in the course of negotiations and the ambitions damaged by the refusal to accept historical responsibilities. ###
IBON_Media_Release_24_Nov_2013.pdf
Tags: climate change, climate justice, climate talks, COP19, Poland, UNFCCC, Warsaw

Heading for higher ground: Climate crisis, migration and the need for justice and system change re-launch