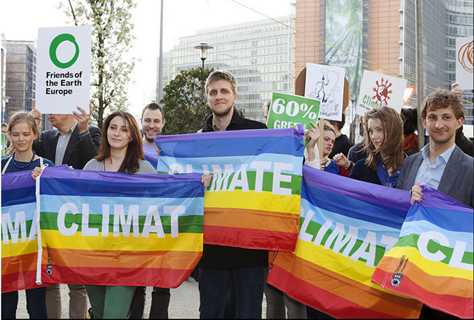 Full text:
[[{“type”:”media”,”view_mode”:”media_large”,”fid”:”336″,”attributes”:{“alt”:””,”class”:”media-image”,”height”:”320″,”style”:”text-align: center; width: 350px; float: right; height: 236px;”,”typeof”:”foaf:Image”,”width”:”474″}}]]
More than 220 people joined a mass action in Brussels, Belgium on 20 March to protest the inaction of the European Union states on climate change. IBON International participated in the mass action, which was led by Friends of the Earth Europe (FoEE) on the occasion of the EU heads of state meeting on climate and energy targets for 2013.
In the 'EU 2030 package', EU commits to reduce greenhouse gas emissions by 40% by 2030 but contains no clear or binding targets for individual countries to increase renewable energies or cut energy consumptions.
FoEE and other protest action participants believe that Europe's emissions must be reduced by at least 60% by 2030, and there must be binding targets to reduce energy use by a minimum of 50%, and increase the share of renewables to at least 45%. Additionally, the EU needs to provide financial support for climate action in developing countries.
Magda Stoczkiewics, director of FoEE, explained the links between dirty energy developments like nuclear, coal, and shale gas, with the tremendous corporate influence of giant energy firms over official EU and international climate and energy processes.
Maitet Ledesma of IBON International shared the adverse impacts of dirty energy outside Europe, on entire peoples and the entire planet, for example through extraction of fossil fuels and other minerals by multinational firms.
Other speakers expounded on the principle of putting people's interests ahead of dirty corporations, on the feasibility of clean, community-owned energy, and
on the urgent need for a just energy transition towards long-term solutions to the energy and climate crisis.
More details, as well as pictures and video clips of the protest action, are available via the links below:
Video of action
Photos of action
Video of Sonja from Friends of Earth Europe
Tags: Brussels, climate change, protest