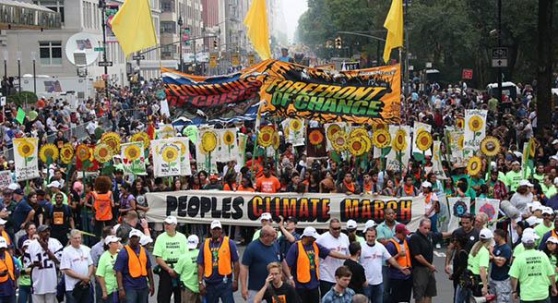 [[{“type”:”media”,”view_mode”:”media_large”,”fid”:”391″,”attributes”:{“alt”:””,”class”:”media-image”,”height”:”261″,”style”:”width: 350px; height: 190px; float: right;”,”typeof”:”foaf:Image”,”width”:”480″}}]]
Full Text:
IBON International Updates (2014)
Climate Justice, No. 2
NEW YORK, 21 September 2014—An estimated 400,000 people marched through the streets of Manhattan today to highlight the seriousness of climate change and the urgency of meaningful climate action.
In what is now considered to be the largest demonstration ever on the issue of climate change, the People’s Climate March drew the participation of very diverse groups that included frontline communities most affected by climate change, labor, migrants and refugees, farmers and fisherfolk, anti-corporate campaigners, scientists, faith-based communities, and many more.  United Nations Secretary General Ban Ki Moon, who will be hosting on 23 September a high-level summit on climate change with more than 120 heads of state and government, was also present at the march, together with other big name celebrities such as musician Sting.
The spotlight will now be on this UN Climate Summit that is expected to put climate change “back on top of the global political agenda,” providing the needed political push to set into motion a new global development plan that combines the goals of addressing climate change, as well as ending poverty and inequalities.  While US President Barack Obama has confirmed his participation, Germany, Australia and Canada—countries historically responsible for grave environmental degradation and resource extraction in developing countries—will not be present at this high-level gala.
While there was a common aspiration of meaningfully addressing climate change, messages at this afternoon’s Climate March were quite indicative of the huge differences in compulsion and motivation.  Some held banners that carried specific issues and demands ranging from “healthy planet and good jobs” and “fast for the climate”, to the more radical  “system change, not climate change, resist imperialism.” ###
Photo by M. Scott Mahaskey/POLITICO, from POLITICO website photo gallery: http://www.politico.com/gallery/2014/09/peoples-climate-march/002042-029017.html
IBON International Update #2 (Spanish).pdf
Tags: climate change, climate justice, climate march, climate summit, social movement