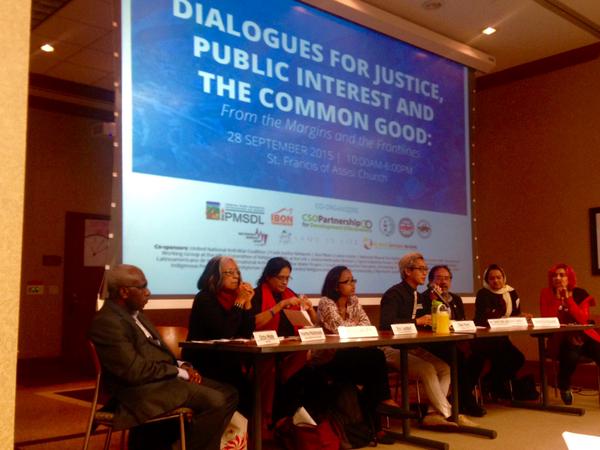 [[{“type”:”media”,”view_mode”:”media_large”,”fid”:”1096″,”attributes”:{“alt”:””,”class”:”media-image”,”height”:”360″,”style”:”width: 350px; height: 263px; margin: 5px; float: right;”,”typeof”:”foaf:Image”,”width”:”480″}}]]
A day after 193 member states of the United Nations adopted the 2030 Sustainable Development Agenda, the CSO Partnership for Development Effectiveness (CPDE) together with grassroots activists, faith-based groups and NGOs organized a side event at the margins of the UN summit to discuss pressing issues affecting the marginalized and frontline communities in the context of the post-2015 development agenda.
"GDP does not tell us what is happening on the ground, it is the leaders from the margins and frontlines, like you, do! You tell the stories of the high cost that is being borne by our earth and our communities," renowned environmental activist Dr. Vandana Shiva said as she delivered the forum’s keynote address via video message.
From the margins and frontlines
The one-day activity gave space for grassroots organisations and activists to give first-hand testimonies on how they continue to struggle with injustices, inequities, exploitation, and the plunder of their natural resources.
Norma Maldonado from People's Coalition on Food Sovereignty (PCFS), Guatemala, highlighted the irony of corporations that limit seed access for farmers and small-scale food producers that need it the most. “Unless the 'Global Goals' can guarantee food sovereignty, we cannot deliver on these targets,” said Norma. Food sovereignty is a concept that refers to the peoples right to healthy and culturally appropriate food as well as their right to define their own food and agriculture systems.
"We want our seeds. Trade treaties ensure that companies are above people and that governments are into business and not governance. We are killing mother Earth to eat junk food. To grow food we need land but that is being grabbed by the companies”, said Norma.
Mazeda Akter Uddin, National Women's Coordinator at ASAAL (Alliance of South Asian American Labour) exposed the human rights violations faced by migrant women workers in New York. She lamented that many South Asian migrant women workers are being abused and discriminated, even within the USA. They are paid less and can be terminated without any reason or notice.
Two civil society representatives – Eni Lestari, a migrant worker in Hong Kong and affiliated with International Migrants Alliance (IMA), and Nazma Akhter, a former garment worker from Bangladesh—who were duly selected to speak at the UN General Assembly but were later denied permission in the inter-governmental meetings– also had their say in this Dialogue.
"I am not surprised that I was not approved by the President of the General Assembly to speak. I do not have an uplifting story to tell that makes it possible to believe that poverty can be solved by 'scaling up' skills or credit or growth. Mine is not a story of rags to riches. My story is an unglamorous story of poverty, exploitation, migration and discrimination of millions of women around the world", said Eni.
Leave no one behind?
Sara Flounders, who leads International Action Centre and is a noted writer based in the US, said, "The scourge of war and the enormous military expenses are missing from discussions around world's problems. In the period since Millennium Development Goals (MDGs) were announced in 2000, US wars have been the greatest source of infrastructural destruction and cause of deaths of millions of refugees."
When the US discusses sustainable development goals and environmental devastation, one thing is always left out of the discussions and that is US militarism. The Pentagon is the world's worst polluter of Green House gases and yet it has a blanket exemption in all climate agreements," added Sara.
Paul Quintos, from IBON International and Campaign for People's Goals, wondered why similar promises were being pledged again after 15 years. “The declaration says: Leave no one behind, but in reality people have been, and are being, pushed back,” Paul said.
The whole-day event ended with a strong resolve from civil society to engage the implementation of the 2030 Sustainable Development Agenda and hold governments accountable to their commitments.
___________________________________________________________________________________________
Original article posted: http://www.citizen-news.org/2015/10/dialogues-for-justice-public-interest.html
Tags: CPDE, NGOs, PCFS, People's Goals, post-2015, SDGs, side event

On a “binding treaty” for TNCs, and why people’s grassroots actions remain key

On the complicity of the IMF, other IFIs in violating people’s economic rights today