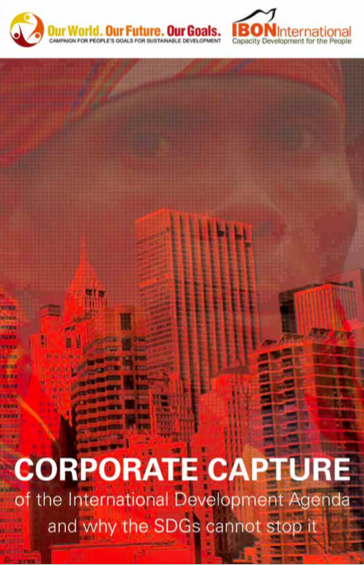 [[{“type”:”media”,”view_mode”:”media_large”,”fid”:”1098″,”attributes”:{“alt”:””,”class”:”media-image”,”style”:”width: 193px; height: 300px; margin: 5px; float: right;”,”typeof”:”foaf:Image”}}]]
Member States of the United Nations (UN) have set 2015 as the year when they chart a new course for humanity. After nearly three years of consultations and intergovernmental negotiations, Heads of State and Governments adopted the “2030 Agenda for Sustainable Development” on September 24, 2015. UN Secretary General Ban Ki-moon describes this as “a plan of action for ending poverty in all its dimensions, irreversibly, everywhere, and leaving no one behind.”
However, many people’s organizations and movements are more cautious if not skeptical. This collection of articles produced by the Campaign for Peoples Goals for Sustainable Development (CPGSD) and IBON International illuminates why. It reflects the lived experience of indigenous peoples, small farmers and peasants, migrants, and ordinary citizens from various regions of the global south under the neoliberal mode of development – the Millennium Development Goals (MDGs) notwithstanding. It also critically examines the prospects of achieving the new set of Sustainable Development Goals (SDGs) under the 2030 Agenda in the face of dominant trends in government policies and practices.
The publication serves as a timely and urgent reminder to advocates and governments alike that the people will not be placated by lofty pledges and grand declarations. For as long as the structural roots of poverty, inequality, exclusion and environmental destruction are not addressed; for as long as the failed and unjust economic and political system remains intact; there will be reason for people to resist and to struggle for an alternative future.
Click here to download a copy of the ebook.
Tags: CPG, People's Goals, post-2015, SDGs

Time nearly up for global leaders to seal the Paris climate deal, illegitimate and immoral even before it is sealed?

The historical responsibility and climate vulnerability conundrum: real or conjured?