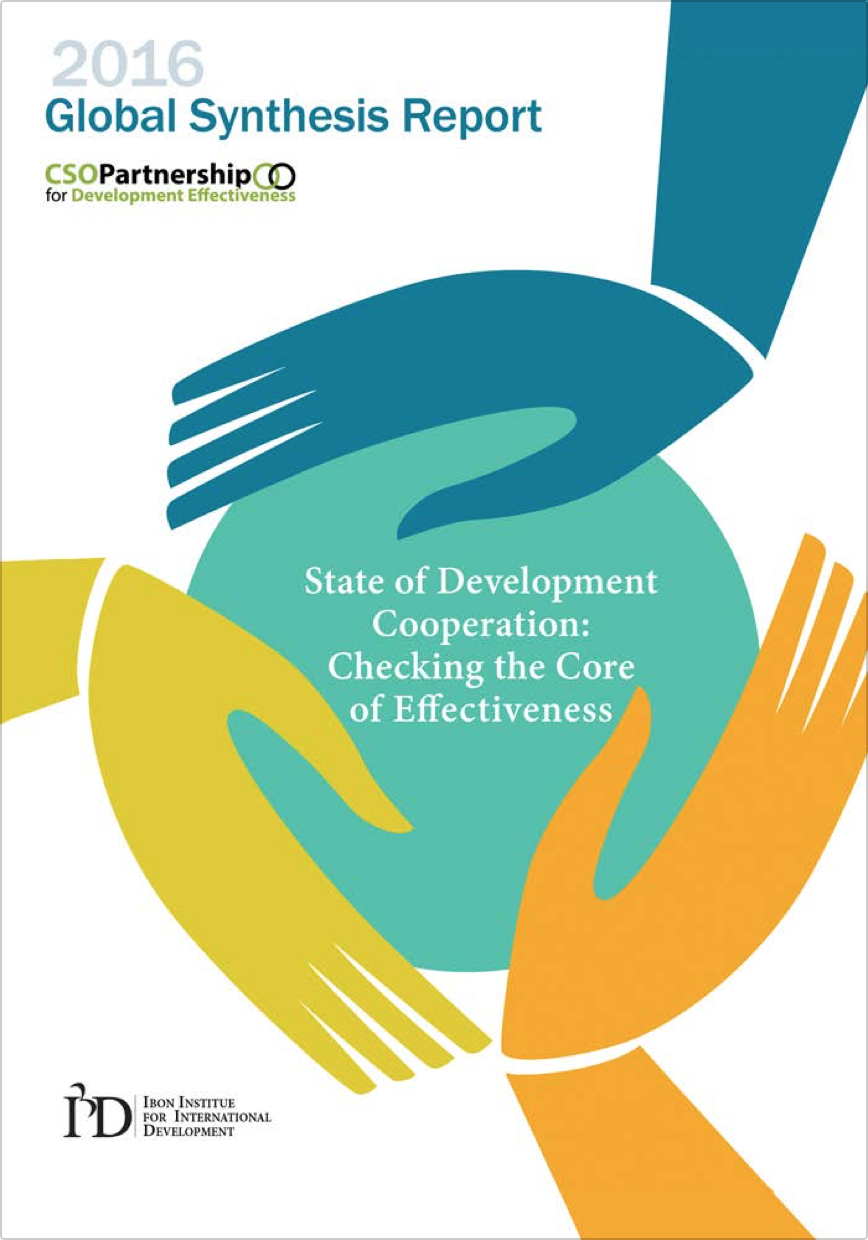 This is among the findings of the 2016 Global Synthesis Report on the State of Development Co-operation: Checking the Core of Effectiveness.

The Report, published by the CSO Partnership for Development Effectiveness (CPDE) with editorial assistance from the IBON Institute for International Development (I3D), features 18 country-level studiesthat utilized interviews of key government and civil society actors, in addition to qualitative analyses, as they detailed the state of core commitments as seen from the ground.

The “core” mentioned in the title refers to the unfinished development effectiveness commitments of various development actors as embodied in the four “Busan principles:” 1) democratic ownership, or how national development plans should reflect the people’s, especially the poor and marginalized, interests; 2) focus on results; 3) inclusive partnerships, where civil society organizations (CSOs) are considered development partners; and 4) transparency and accountability.

From the Report, challenges remain in how donors can fulfill the commitments towards democratic ownership. This is given that donors still largely influence, in line with their interests, which purposes and programs aid would be used for. In some countries, there were also issues of access to information about the amount of aid provided, and for which purposes.

The Synthesis Report also points to challenges for countries with issues of government corruption, which have experienced decreases in “programmable aid” from donors. Programmable aid is the amount which can be allotted by a country according to its own development priorities, and is essential to development results for the people.

On the commitment to recognize civil society organizations as development partners, issues remain in practice when it comes to ensuring that they are involved, effective (with access to relevant information) and have a fair influence in policy dialogues and consultations. This is related to State laws and practices that limit the activities of CSOs, which were raised as issues in several countries.

CPDE is an open platform that unites CSOs from around the world, striving to make development more effective by reshaping the global aid architecture and empowering CSOs working on the ground. The IBON Institute for International Developmentis the knowledge institute of IBON International, synthesizing the organisation’s wide range of knowledge on social policy, economics, and development. IBON International is part of CPDE and joins the platform in coming up with policy products and analysis on global policy discourses.

The 2016 Global Synthesis Report was launched last November 29, 2016 during the CSO Forum in Nairobi, Kenya, a day before the Second High-Level Meeting (HLM2) of the Global Partnership for Effective Development Co-operation (GPEDC). To request copies of the 2016 Global Synthesis Report, kindly email publications@csopartnership.org. An electronic version of the Report can also be found at the CPDE website.

Save the Dates: Global Peoples’ Surge in Paris

Debunking the hype about the ‘Asian Century’ (May-June 2012)