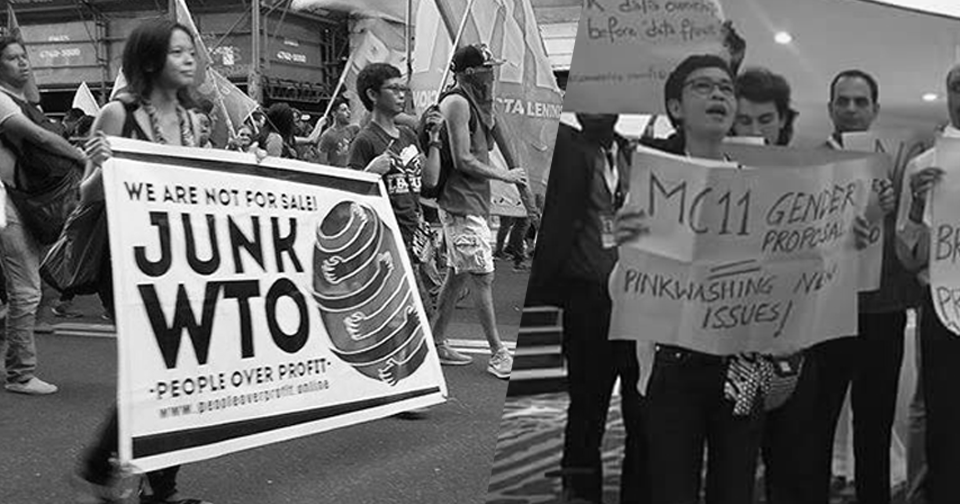 December 12, Buenos Aires – The WTO 11th Ministerial Conference started negotiations on December 11 with the backdrop of more than fifty civil society organizations’ representatives banned from participating and even entering the country, while corporate lobby groups are permitted entry.

Deborah James, Co-ordinator of Our World Is Not For Sale Network (OWINFS), condemned this state of affairs: “They are CSOs with a long history of advocacy for a just global economic system. They were banned for their political views.” She added: “Yet the International Chamber of Commerce, DHL, UPS, the World Economic Forum, PhRMA, the European Services Forum, and other corporate lobby groups are permitted.The banning of accredited participants to an international meeting of a multilateral organization de-legitimizes that meeting. We condemn this political repression by the Argentine government.”

Some of the groups banned included people’s organizations from the global South, such as Roots for Equity (Pakistan),Andra Pradesh Vyavasaya Vrutidarula Union (India), International Migrant Alliance (Hong Kong), Institute for National and Democracy Studies (Indonesia) and People Over Profit (Philippines).

“That the WTO is being hosted by the neoliberal regime of President Mauricio Macri and that peoples’ movements from around the world are being prevented from the summit indicate for us that pro-big business agenda is set to overrun the WTO negotiations in Buenos Aires,” Ivan Enrile of People Over Profit earlier said.

The possibility of a more extensive role of business interests prevailing over MC11 is highlighted by the first ever “Business Forum” led by the International Chamber of Commerce (ICC) in partnership with the Argentine government. The 1-day forum on December 12th attempts to formalise private sector role in the future of the WTO. No such official platforms have ever been available for civil society and people’s organisations. In addition to this, Friends of Investment Facilitation for Development, a group of 12 countries that includes China, is also asking for negotiations for investment facilitation, despite the fact that there is no mandate at the WTO for this.

Further, there is also a “Joint Declaration on Trade and Women’s Economic Empowerment” which, conspicuously, will be officially presented during the Business Forum. Sources say it is estimated to have already received the backing of more than one-third of the WTO members and might get official approval during MC11.

She further explained, “WTO's promotion of liberalization and deregulation has strengthened TNC’s control over vast lands and resources. It has driven wages and labour standards to historic lows, with foreign investors exploiting women as cheap and flexible labour source. All these have further heightened women's vulnerability with the privatization of social services such as education and health. No amount of gender-inclusive language will conceal WTO's real anti-people and anti-women character."

Further adding to the lack of democracy at the negotiations, the facilitator for Agriculture, Amina Mohamed, has convened a Green Room meeting to discuss domestic support and the permanent solution to public stockholding programs for food security, according to TWN Info Service sources. This runs contrary to the oft-repeated promise of open-ended meetings and no-closed door sessions at the WTO. Ministerial conferences are supposedly a venue for countries to decide through “consensus”, but past ministerial conferences have shown that there is lack of democracy and transparency as results are negotiated through by-invitation-only “Green Room discussions”.

The WTO and the Argentine government cannot keep the people out of MC11, where people’s lives, livelihoods, resources and rights are being negotiated to benefit big business and the elite of developed countries. Protests marked the opening and first day of negotiations, as people in Argentina and elsewhere in the world took to the streets and social media to call for junking of the WTO. ###