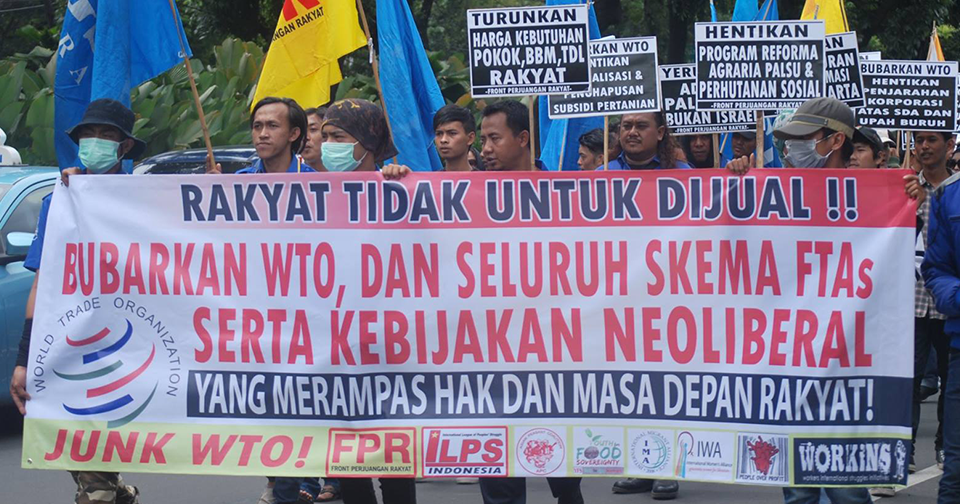 December 14, Buenos Aires – The 11th Ministerial Conference (MC11) of the WTO ended yesterday without the adoption of a Ministerial Declaration document, which would detail the agenda agreed upon in the trade talks.

“The deadlock is a temporary setback for the pro-corporate agenda of rich industrialised states,” said Lorelei  Covero from IBON International, who was at Buenos Aires. “In MC11, we saw these countries stubbornly peddle ‘new issues’ for their monopoly capitalists, such as e-commerce, under disguise as a pro-MSME or pro-women agenda, which facilitated the breakdown.“

“They also tried to push investment facilitation and rules that limit already-weak regulatory power of developing countries, while outcomes for developing countries’ food security and food sovereignty such as reducing domestic support are defeated,” she added.

The draft text supposedly does not have a new mandate that forwards e-commerce and no new rules on investment facilitation and domestic regulation. Reportedly, there were also no resolutions on public stockholding, nor any reductions on domestic support especially for developed countries. IBON International was at Buenos Aires with other CSOs including those from the Our World is Not For Sale.

Remarking on WTO Director General Azevedo’s closing comment that the WTO ‘system is not perfect’ but that ‘it is the best we have,’ Marjorie Pamintuan from the Asia-Pacific Research Network said: “Currently, the WTO system is certainly the opposite of the ‘best’ for trade – its rules are complicit in how transnational corporations (TNCs) impoverished peoples in the global South for decades.”

“We could only say that there is real progress only if trade rules are founded on the need to address peoples’ development. There is definitely a need to transform these,” Covero also commented.

Covero is also wary of the future of trade: “Peoples will still need to be wary despite the MC11 deadlock. According to the WTO, Members committed to have a deal on fisheries subsidies by 2019, which could still threaten small fisherfolks’ livelihoods. And despite a setback for TNCs at the WTO, rich states continue to push free trade agreements with Southern countries at expense of economic rights.”

“Southern movements’ battle for trade that serves peoples’ needs definitely continues,” Covero added. “If the WTO persists in forwarding ‘new issues,’ have rules that support corporate attacks on farmers and workers, and have rules on areas like domestic regulation, it is understandable that grassroots movements call to ‘junk’ the WTO.”

According to global campaign network People Over Profit, peoples in the global South bore the brunt of the effects of liberalisation: “Small producers and workers in developing countries, including indigenous peoples, certainly had enough of the poverty caused by WTO’s neo-liberal rules, which only entrenched monopoly capitalists control over resources in the global South. So with them, we call to junk the WTO.” ###

Towards Decent Work for All (March-April 2011)