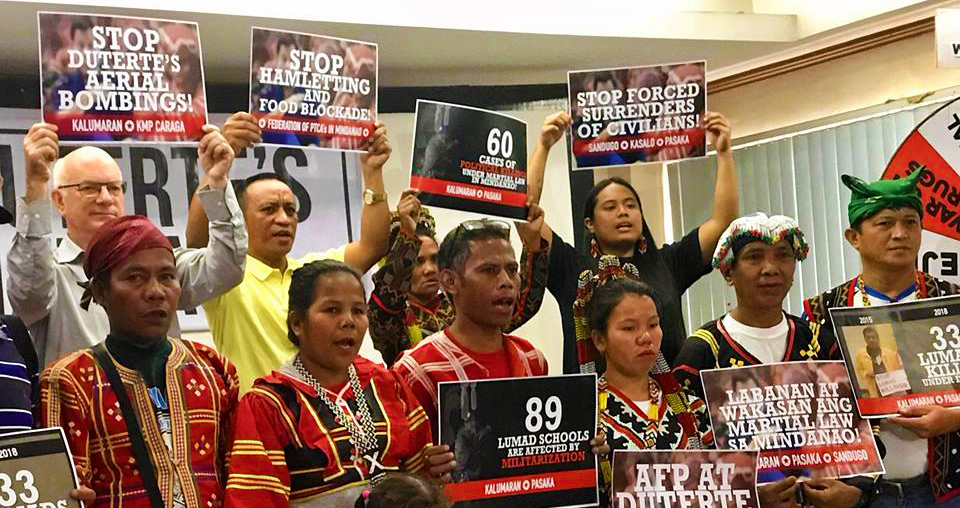 26 February 2018 (Quezon City, Philippines) – Under continuing Martial Law in the Mindanao island, in southern Philippines, farmers and indigenous peoples have experienced heightened cases of false charges, harassment, and even torture and killings.

This is according to personal accounts of farmers, indigenous peoples and delegates of a recent International Solidarity Mission (ISM) who gathered at a forum today.

Janry Mensis, a farmer from Compostela Valley in the Davao region, recounted how he and a minor “Jerry” was beaten, tortured and barely escaped murder by soldiers under the 71st Infantry “Kaibigan” Battalion (IB) of the Armed Forces of the Philippines (AFP).

“There are around 60 families of Lumads who are now in the Sanctuary area, and still counting. This is due to the massive militarization happening in their ancestral lands prohibiting them to go to their farms,” the report of the ISM added.

The report also described how the AFP, with foreign and local big business, “have instigated a brutal war against indigenous people’s communities in the SocSKSargends region, which resulted in the massacre of eight Lumad leaders in Lake Sebu, South Cotabato.”

Adina Ambag, sister of one of the victims of the December 2017 Lake Sebu massacre,[i] decried the inaction of the local government and the National Commission on Indigenous Peoples (NCIP) during last Monday’s forum. The massacre, according to the community, was rooted in a land dispute with a local big business firm.[ii]

It also compels respect for the right to life including against massacres; and the basic collective rights of workers, peasants, indigenous peoples, and other sectors. It also demands the Philippine government to respect the right of indigenous peoples to ancestral lands.

The agreement was signed by the Philippine government with the National Democratic Front of the Philippines in 1998 to protect the rights of Filipinos, especially the poor, and lay the “ground for just and lasting peace.”

Mindanao: Poverty amidst richness in resources

Mindanao in southern Philippines is divided into six regions. According to 2015 data by the Philippine Statistics Authority, four of the five poorest regions in the country are in Mindanao.[iii]

On the other hand, as per the Mindanao Development Authority, eight out of 10 of the top agricultural export commodities come from the island, with the United States the “largest export market” as of 2013.[iv]

During the forum, Jeremiah Numeral, a farmer and peasant leader, also denounced the increasing number of false charges against farmers in the region. “Thirty-nine farmers have been so far imprisoned and over 200 trumped-up cases have been filed,” he said in Tagalog.

It is impossible that he committed the murders he was accused of, Numeral said, for these would have had to occur within a ten-minute interval on two different Mindanao provinces. He claimed that the false charges were filed against farmers to weaken people’s organisations that assert their land rights.

The findings of the International Solidarity Mission echoed this, saying that “peasant and indigenous people’s leaders, Lumad [indigenous peoples’] school teachers and other human rights defenders face trumped up criminal charges which were initiated by the military, police and the Department of Justice to harass and malign defenders, in an attempt to silence them into passivity.”

Philippine President Duterte has put Mindanao under Martial Law on May 23, 2017, amidst clashes between the ISIS-inspired Maute group and military forces in the city of Marawi.

Martial Law was extended twice, the last time in December 2017. This was two months after the President declared Marawi “liberated” from the Maute group. The Congress decision extends it even further for another year, including the suspension of the need for warrants in arrests.

Julie Jamora of Gabriela USA recounted how Martial Law was used to arbitrarily restrict the movement of the international solidarity delegates. The ISM was done from February 18 to 25, 2018, and went to the four regions of Caraga, SocSKSargends, Northern and the Southern Mindanao region.

“It is really the intentional harassment of the fact-finding mission and international delegates that showed the true intent of the US-backed Duterte regime to hide all of these human rights violations from the international community,” Jamora said.

Recently, a United States’ operation, called Pacific Eagle, was revealed to have been at work since September 2017. Operation Pacific Eagle is a “contingency operation” to support the Philippine military in its “counter-terror” work,[v]which will only “terminate when the AFP no longer requires US military assistance to address its internal terrorist threat.”[vi]

Seventy-five percent of the Philippine military is now deployed in Mindanao, according to the peasants’ organisation Kilusang Magbubukid ng Pilipinas[vii]. In December 2017, the Philippine government deployed additional troops and checkpoints in the island after classifying the Maoist New People’s Army as “terrorists” within the same month.[viii]

For peace based on social justice

Rights advocates and defenders stress the continuing need for peace talks that address the social and historical roots of armed conflict. They also continue to assert the need for the immediate lifting of Martial Law, ending the war on drugs in the urban areas and the state harassment against indigenous peoples and farmers in the countryside.

During the Monday forum, Peter Murphy, Chairperson of the International Coalition for Human Rights in the Philippines (ICHRP), also presented a new book by ICHRP and IBON International. Titled “Duterte Killings Continue,” it tells case stories of state terror and attacks on people’s rights from 2016 to 2017. The book can be downloaded here.

“With this publication and the facts we gathered in this recent ISM, we plan to bring our observations and recommendations to the parliaments and governments of different countries,” Murphy said.

An International People’s Tribunal on the Duterte administration’s crimes will be held later this 2018.

ICHRP vowed to heighten the global campaign, given the persisting need for responses to the grim rights situation under the Duterte administration: “International solidarity is the response of oppressed peoples and advocates of just and lasting peace to fascist and authoritarian regimes like Duterte’s. We will not relent in our consistent support for the campaigns of the Filipino people for human and people’s rights in the Philippines and elsewhere.”

The forum on the impacts of Martial Law and on the findings of the ISM was held in partnership with Karapatan, ICHRP, Mindanaoans for Civil Liberties, and the Moro and indigenous peoples’ alliance SANDUGO. #