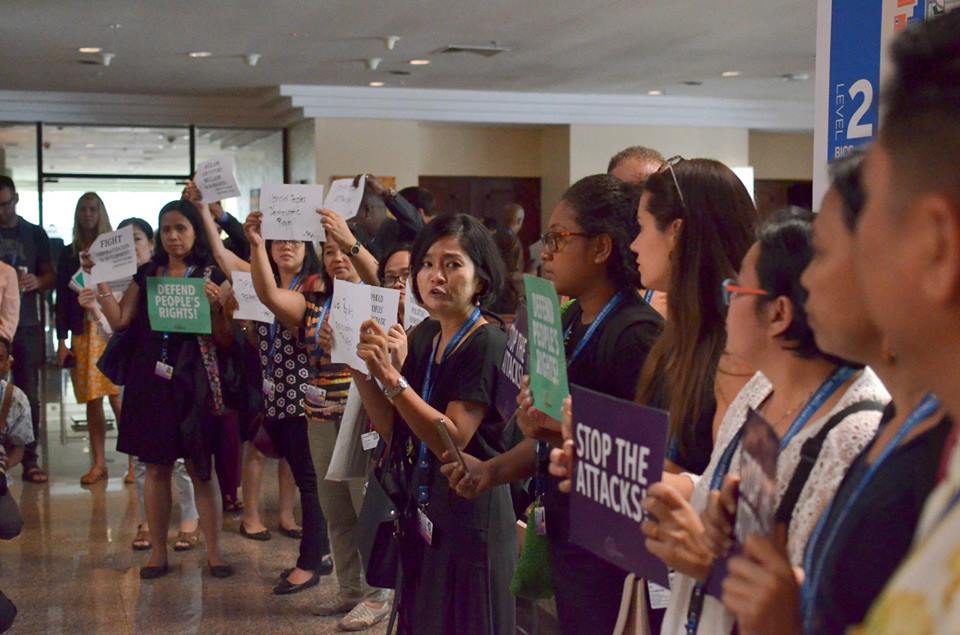 11 October, Bali –Southern-based civil society organisation (CSO) IBON International joins movements in raising concern on the “tactics of repression” used by the Indonesian government’s police and militia against what the CSO called a “legitimate and justified people’s initiative.”

The Peoples’ Global Conference (PGC) against the IMF-World Bank was set to be held at Radio Republik Indonesia (RRI) Auditorium until venue personnel informed PGC organisers about a final, unilateral cancellation. A new venue was booked but was also cancelled this morning due to pressure from state forces. PGC organisers said that this was done through the influence of Indonesian national police who are“using the local village leadership and paramilitaries”to create a “repressive atmosphere.” Suspected intelligence operatives continued to hound PGC participants, despite IMF’s Lagarde claim that she has been aware of the PGC and is seeking a “dialogue” to resolve the issue.

“It is very malicious and unjust for local authorities to be associating this with terrorism or any terrorist-tagged organization because the Peoples’ Global Conference is a legitimate activity organized by peoples and their organizations adversely impacted by IMF-WB policies and projects,” said Rahmat, spokesperson of the Gerakan Raktan Menentang IMF-WB (Peoples’ Global Movement Against IMF-WB).

Amy Padilla of IBON International, who was attending the IMF-WB civil society events, said that “the deceitful police tactics against people’s political rights” have grave implications.

The World Bank Group has been moving to mainstream their Maximizing Finance for Development (MFD) approach in the past years. An IBON International paper criticised the current MFD as forwarding a “coordinated WB for corporate capture” founded on a “questionable development narrative.”[i]

Padilla remarks that the IMF-WB meetings in Bali are held at a crucial juncture. “There are high stakes for those of us living in Southern countries today – we are thrust headlong into changing climates: politically, economically and environmentally. A possible Southern debt crisis looms aside from another Northern financial crisis, as well as worsening informal employment, and almost irreversible climate risks,” she said.

Padilla remarks that the global South “should never forget that the economic system driven by plundering corporate giants and shaped by the IMF-WB has led us [Southern peoples] into this dangerous conjuncture.”

“It is important for the people to get their voices heard, to justly oppose the IMF-WB. But we Southern peoples cannot reclaim our right to craft our development, our economic future if at the basic level of free expression here in Bali, we are already being suppressed,” Padilla added.

With no space to air their grievances, participating CSOs from Asia, Africa, Latin America, and sympathizers from the North took to the halls of the IMF-WB Annual Meetings to echo the calls of the Peoples’ Global Movement against IMF-WB: "Hands off PGC! Let the PGC push through! Stop the attacks and uphold peoples’ rights!" #