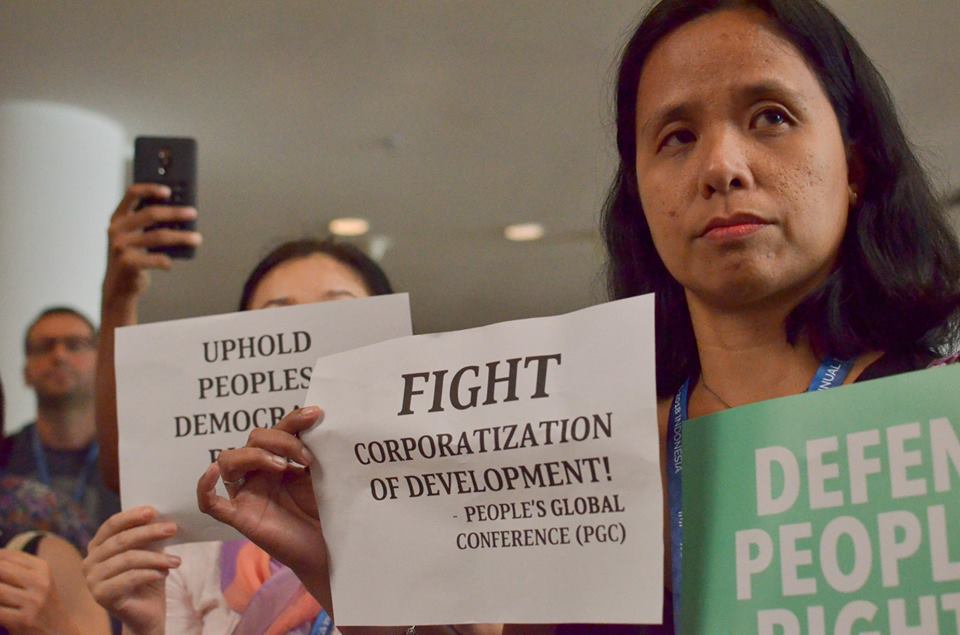 As the Annual Meetings of the International Monetary Fund and the World Bank (IMF-WB) officially begin in Bali, Indonesia on 12 October, IBON International reiterates its concern on the WB’s current approach of "Maximizing Finance for Development" (MFD) as a systematic approach to create more roles for the "private sector".

The 2018 meetings are held ten years since the global financial crisis (GFC), with the IMF-WB continuing to privilege the private sector and so-called business-friendly investment climates. This is amidst mounting concerns on inequality and people’s economic rights after decades of liberalisation, privatisation, deregulation through IMF-WB policies and programs.

Ten years since the GFC and its response to European debt, the IMF is again warning about possibilities of another debt crisis. But it shies away from acknowledging that the policy norms it encouraged for decades — including deregulated finance — are largely to blame for today’s economic slowdown and declining prospects for the people.

The MFD could supposedly fill the “financing” gap especially in infrastructure through promoting financing from international capital, government-led pro-investor reforms, public-private partnerships (PPPs) and so-called “blended finance.” In reality, this approach consolidates the corporatisation of the development agenda.

The MFD wrongly assumes that big private investment is necessarily beneficial to peoples’ welfare and the right to development. Aside from failed PPPs, there is mounting evidence that show growing corporate power is related to rising impoverishment for society’s producing sectors — admissions coming from the IMF itself. Meanwhile, the UNCTAD argues that private and social priorities are not the same; there is a need for the primacy of national development strategies instead of thinking infrastructure problems in Southern economies as “financing gaps” to be “filled” by private investment.

For IBON International, it is high time for the IMF-WB to retire their already outdated assumptions. On these grounds, if governments indeed strive for their peoples’ welfare, they would find it necessary to reconsider their membership in the IMF-WB.

At another level, the WB’s approach casts aside the principle that development should entail peoples’ active participation. As an organisation promoting democratically-owned development, we stress that the principle of people’s sovereignty should be primary. This entails their substantial role in shaping development processes. This is in contrast to the current situation where people do not have genuine participation in determining national development paths, and the highly limited avenues for movements and civil society within the IMF-WB official spaces.

Current independent initiatives such as the Peoples’ Global Conference Against the IMF-WB (PGC) are essential as spaces for the voices of affected and resisting people’s organisations and social movements. In calling to "shut down" the IMF-WB, these movements are calling attention to decades of corporate power – amidst the threat of ever-strongly entrenched corporate dominance within development. We call on the international community to support people’s efforts that stress the need "to reclaim our rights and future," especially with continuing repressive moves from the Indonesian security forces in Bali through the use of police, paramilitary and intelligence personnel deployed against the peoples’ conference, including forced cancellation of venues. #