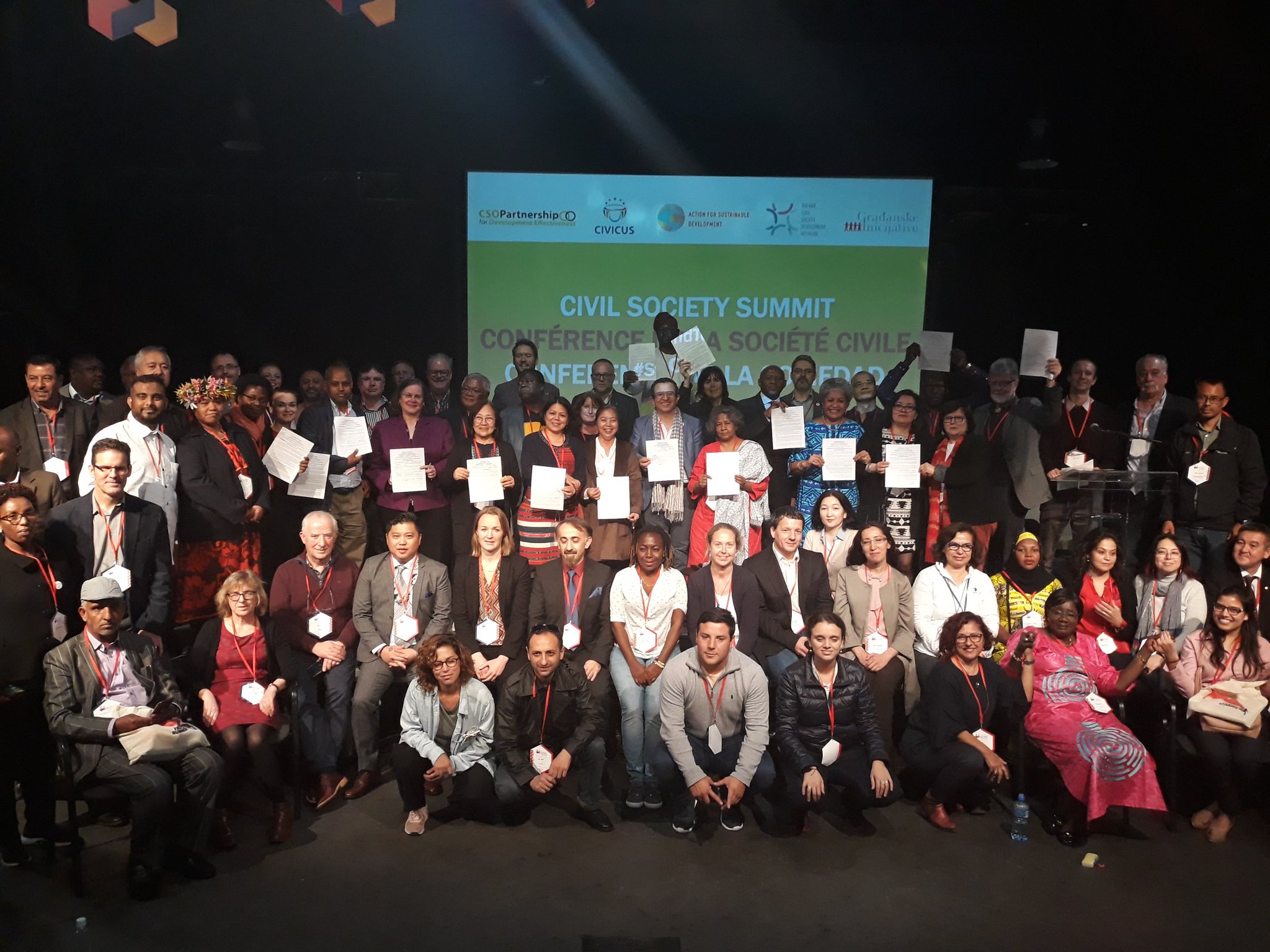 10 April 2019, Belgrade, Serbia — At the 2019 Civil Society Summit in Belgrade, civil society organisations’ (CSO) representatives, activists, and campaigners from around the world called on development actors to uphold their commitments for CSO enabling environment, to reverse the trend of shrinking and closing civic spaces, and to put an end to attacks against human rights defenders and civil society workers.

In his address, United Nations (UN) Assistant Secretary General for Strategic Coordination Fabrizio Hochschild affirmed the importance of civil society’s role in development. He also acknowledged that globally, there is a retreat in multilateral commitments and attacks on civic spaces are on this rise. Despite these, CSOs must remain strong as their work and energy in defending rights and justice are more important than ever.

IBON International Director Emeritus Tony Tujan was part of a panel on the different cases in shrinking civic space in several countries and sectors. In his presentation, Tujan argued that the issue of closing space is not only happening at the country-level. In the current economic and political climate, international NGOs, like IBON International, are no longer exempted. Challenges in CSO practice, including legal and regulatory restrictions and access to funding, are experienced in both North and South.

Tujan said that advocacy CSOs are under attack for being tagged as ‘legal fronts’ or foreign mercenaries. Shrinking and closing civic spaces are also manifested through human rights violations, fabricated charges, intimidation, harassments, and worst, extrajudicial killings. Cases like these were documented by Philippine CSOs and were part of the evidence presented in the International People’s Tribunal, which was co-organised by IBON International in 2018.

In countries where the culture of impunity exist, CSO workers and human rights defenders face daily challenges in both their security and operations. Days before the Summit, fourteen (14) farmers and community organisers in the Central Philippines were killed by State forces under the pretexts of so-called national security.

International Indigenous Peoples Movement for Self-Determination and Liberation Coordinator and IBON International Board of Trustees Member Beverly Longid facilitated a session on civic space. In her synthesis, Longid said that civic space is not only political but also an economic issue. While civic spaces are shrinking and closing, spaces given to corporations in development partnerships and policies are increasing and expanding at different levels. Longid, herself an indigenous peoples’ rights activist, argued that solutions for this trend entail solidarity and internationalism.

The Summit ended with an endorsement of the Belgrade Call to Action, which calls on UN Member States to reverse the closing and shrinking space for civil society, to stop the attacks on human rights defenders and the undermining of democratic participation, and to renew the prospects for an inclusive Agenda 2030, and the full realisation of sustainable development.

Civil society leaders and representatives committed to move the work forward and bring the Call to Action to different policy arenas and milestones as well as to country-level CSOs and people’s organisations.

The Summit, which was co-organised by the CSO Partnership for Development Effectiveness, CIVICUS, Action for Sustainable Development, Balkan Civil Society Development Network, and Civic Initiatives, gathered around 150 attendees and opened the 2019 International Civil Society Week, with an overall theme “The Power of Togetherness.” The Summit could be followed through the CPDE website (www.csopartnership.org) and in social media through the hashtags #StandTogether and #CSOPartnership. ### (Jodel Dacara, Belgrade)