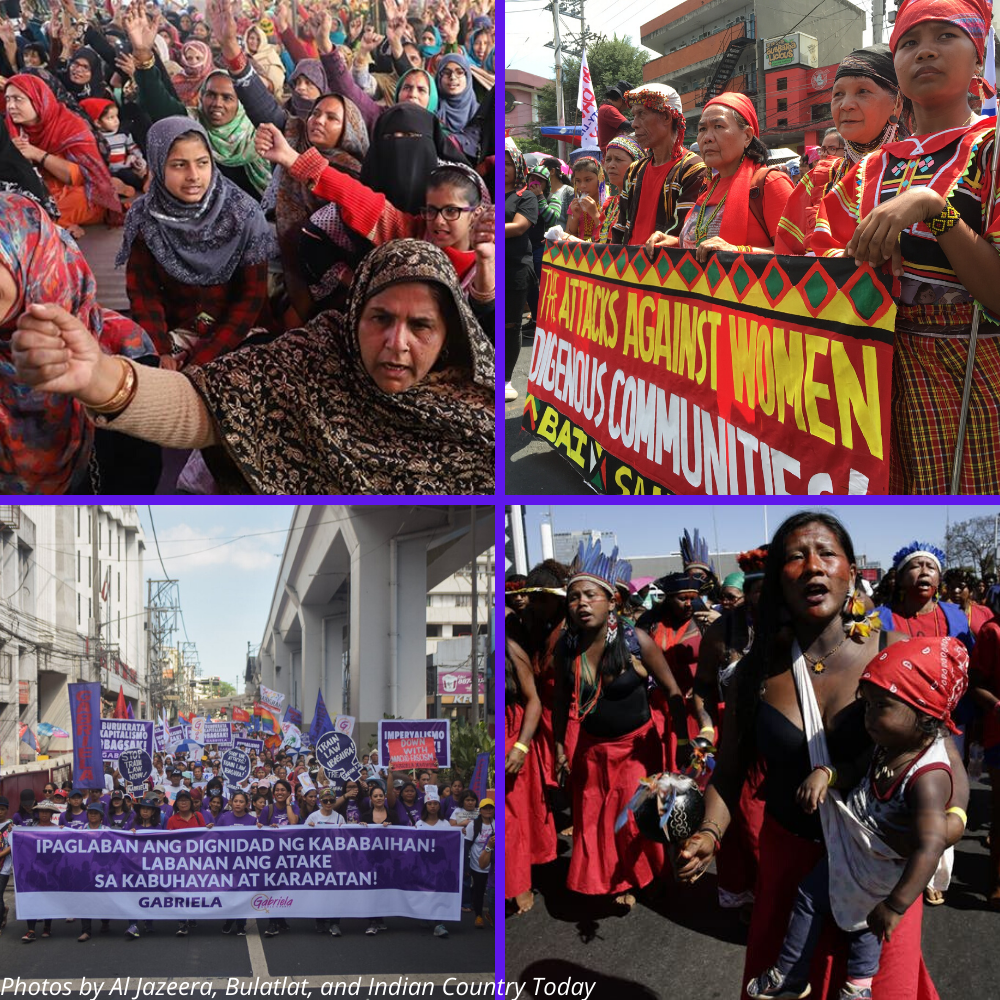 IBON International joins today’s commemoration of the vibrant history and continuing vigorous resistance of women from marginalised sectors against all forms of oppression. We remember anew that celebrating International Working Women’s Day (IWWD) on March 8 is historically founded on international solidarity. The formal origin of this day is attributed to labour and women’s rights German activist Clara Zetkin, who was inspired by the women’s labour movements in the United States, and proposed to dedicate a special day for the international solidarity of working women in 1910.[i]

The first official International Women’s Day held in Germany and Austria in 1911 drove 30,000 women to the streets. During World War I in 1917, Russian women textile workers marked IWWD by going on strike to demand for “peace, land and bread.”[ii] The women’s protests led to the eventual overthrow of the czar.

While we recognise today the achievements of women’s movements through collective struggle and international solidarity, we must also face the difficult reality that majority of women, especially in the global South, are still living under the same oppressive conditions. The worsening global economic crisis and shrinking democratic spaces amid intensifying political repression of right-wing regimes are doubly affecting women who have to provide for the basic needs of the family, as well as take on the responsibility of the primary caregiver. Climate change exacerbates conflict as it increases competition over shrinking natural resources, and results to more cases of violence against women and girls.[iii] As the patriarchal and monopoly capitalist system obstructs women from enjoying their basic rights, their right to participate in and determine their development is totally neglected. But as history has shown, economic crises and political repression always spur resistance, and across the globe, women’s movements challenge and shake the status quo.

Early in January last year, thousands of workers in Bangladesh, mostly women, went on strike to demand living wages.[iv] The Bangladesh garment industry produced USD 30-billion worth of clothing last year for global brands such as H&M, Primark, Walmart, and Tesco, among others, and comprised 80% of the country’s total export revenue.[v] Bangladesh is the second largest exporter of clothing, next to China.[vi] But this booming industry is built on the systemic oppression of Bangladeshi women who are paid very low wages, and who routinely experience workplace sexual harassment and abuse.[vii]In April last year, garment factory workers in the country went on a hunger strike to demand their reinstatement after they were fired for protesting the sexual harassment of their 18-year-old co-worker by the factory’s assistant production manager.[viii]

Last November 25, 2019, Chilean women led by the feminist collective LASTESIS commemorated the International Day for the Elimination of Violence Against Women (IDEVAW) by performing a protest song, “Un violador en tucamino” (“A rapist in your way”) in front of the Supreme Court in Santiago, Chile.[ix] The whole protest performance, from the choice of location to the lyrics of and cultural references in the song itself, takes a jab at the systemic oppression of women and the perpetuation of gender-based violence, with emphasis on rape, by state institutions. The choice of location confronts the low rate of conviction of rape cases at eight per cent. While the protest song itself pinpoints authorities—cops, judges, the president—as rapists, and declares that “the oppressive state is a rapist.” The song also makes an ironic reference to the Chilean police anthem, “Sleep calmly, innocent girl/ Without worrying about the bandit/For over your smiling, sweet dreams/watches your loving cop.” The IDEVAW protest happened amid numerous mass protests in the country against neoliberalism beginning in mid-October when high school girls led demonstrations against the 30-peso fare hike.[x]

Women-led protests in Latin America and the Caribbean is not isolated to Chile. Women leaders of Amazon indigenous peoples led the protests against the Bolsonaro government and corporate-instigated Amazon fires last year. [xi] While the Amazon fires have left the headlines, indigenous women continue their resistance against corporate plunder backed by the Bolsonaro regime. In a forum February this year, Joenia Wapichana, the first and, so far, only indigenous Congresswoman in Brazil called for international solidarity and support for the struggle of the indigenous peoples of Amazon.[xii] Bolivian women joined the protests against the right-wing military coup against indigenous and Socialist president Evo Morales.[xiii] In Ecuador last year, indigenous peoples have successfully blocked the IMF-backed austerity package by Ecuador’s President Lenín Moreno.[xiv] Similar protests against austerity deals were held in Colombia,[xv][xvi] while in Guatemala people protested over dangers of state impunity after the closure of its anti-corruption commission.[xvii] The broad masses of Latina women have been part of these resistance movements showing that majority of women are directly affected by neoliberal schemes and state-perpetrated human rights violations.

In Mexico, women will be holding a national 24-hour strike on March 9, following the protest celebration of IWWD on March 8, to rage against and call attention to femicide in the country.[xviii] Feminist activist Maria Salguero reports 3,825 women were killed last year from gender-based violence. Salguero’s figures dispute the government record of 1,006 femicides. Salguero has already recorded 320 femicides for January this year including 26-year-old artist and activist Isabel Cabanillas. Just this February, three women were reported killed, including a 7-year-old.

In India, women comprise the majority in the multiple mass protests against human rights violations of the right-wing Modi regime. Women joined the 250 million workers[xix] who went on a nationwide general strike to protest the pro-corporate and anti-people economic and labour policies of the government in January this year. The strike was supported by underpaid government rural child care workers who are mostly women.[xx] Kashmiri women are actively participating in the resistance against the intensifying state attacks after Modi revoked Article 370, which declared the sovereignty of Kashmir.[xxi][xxii] Ten thousand women are reported to have experienced sexual violence from the occupying 600,000 state forces.[xxiii] Kashmiri and Indian women have faced arrests in protest of state attacks.[xxiv][xxv] Since December 15, working-class Muslim women including 90-year-old grandmothers of Shaheen Bagh are carrying out around-the-clock sit-in protests against the Citizenship Amendment Act.[xxvi]

In the Philippines, a group of mothers and grandmothers patrol their neighbourhood at night to protect their community of 63,000 from gunmen amid President Rodrigo Duterte’s on-going bloody war on drugs that has already killed tens of thousands of Filipinos.[xxvii] The figures of Duterte’s attacks against human rights defenders (HRDs) including women activists are at an all-time high as 209 HRDs have been illegally detained on trumped up charges including 61 women, 44 elderly, and 118 who have special health conditions. From August 2019 to February this year, 17 women have been illegally detained including Cora Agovida, leader of women’s group GABRIELA, who was arrested in front of her two minor children.[xxviii] The Anti-Terrorism Bill, which is on its third reading in Congress, is exacerbating the human rights situation in the country as it tags as terrorist anyone who is critical of the administration. Leaders of progressive groups, namely Cristina Palabay of rights organisation KARAPATAN and Gert Ranjo Libang and Joms Salvador of GABRIELA have been recently threatened with arrest based on trumped up charges.[xxix][xxx]

Women are directly affected by the crises of a neoliberal economy, they are victims of state-perpetrated violence, they are hard-hit by the negative impacts of climate change while developed countries and corporations refuse to be accountable, and so women resist. They have shown throughout history that their struggle is the struggle of the majority for genuine social transformation where people enjoy their basic rights and participate and determine their development.

We, at IBON International, stand in solidarity with women all over the world who are exploited daily by corporations, with women who link arms in picket lines to demand for living wages, with women who use their voices and face the barrel of a gun, with women who protect their communities from the fascist state while armed only with love and political conviction. Today, we reiterate our commitment as part of civil society to work with women and all marginalised peoples especially of the global South towards building a democratic, just, and peaceful society.

IBON International (www.iboninternational.org) engages in capacity development for people’s rights and democracy around the world. It strengthens links between local campaigns and advocacies to international initiatives and brings development issues from the international arena in a way that peoples’ organisations and social movements can engage with at country level.