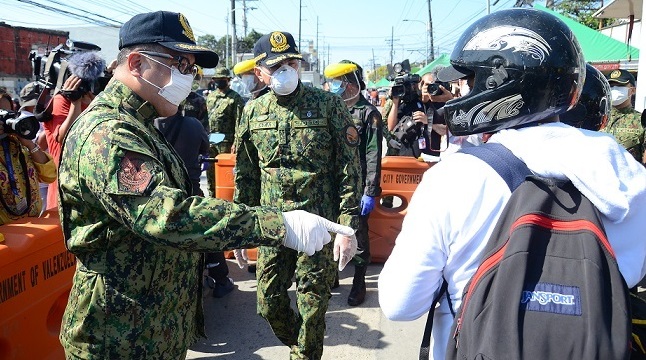 At the 7th Asia Pacific Forum on Sustainable Development, held virtually on May 20, 2020, the Council for People’s Development and Governance (CPDG) delivered the following statement concerning the dire state of civil-political rights in the Philippines and its implications for development. The CPDG is a broad network of Philippine civil society organisations and people’s organizations engaged in the work of democratising development and governance for people’s needs. As a network of IBON International, its work is valuable for our framework and advocacy for Rights-based and People-Powered Democracy, and for our particular priorities on supporting Philippine struggles.

The Council for People’s Development and Governance (CPDG) is deeply concerned that the COVID-19 crisis will hinder action for and delivery of the 2030 Agenda in the Philippines and the rest of Asia and the Pacific.

The 2030 Agenda is significant in bringing together governments and development actors to cooperate on the common goal of eradicating poverty and inequality and for an ecologically sustainable and socially just global economy.

Civil society recognizes the value of voluntary national reviews (VNRs) for regularly monitoring SDGs implementation. When these are truly inclusive, transparent and democratic, VNRs can clarify the conditions of poor and vulnerable groups and be opportunities to propose alternative development frameworks and policies for achieving the 2030 Agenda.

There will be meaningful progress and sustainable development not just if the people’s voices are heard but also if their aspirations, conditions and well-being are given priority in policymaking.

Well-grounded CSOs enable meaningful citizen participation in development planning, monitoring and implementation. There will be meaningful progress and sustainable development not just if the people’s voices are heard but also if their aspirations, conditions and well-being are given priority in policymaking.

CPDG participates in these processes. We take note of how the United Nations (UN) High Level Political Forum (HLPF) acknowledged how the Philippines has incorporated the SDGs in the Philippine Development Plan (PDP) 2017-2022. We also note government efforts to institute mechanisms for improving SDGs implementation – various monitoring and evaluation mechanisms, its SDG website, citizen-generated data, localization of SDGs implementation through local government units, and the Stakeholder Chamber for the newly-created Sub-Committee on SDGs.

Nonetheless, we are still concerned that the space for civil society participation is still limited in these. The VNR consultations, for instance, did involve CSOs but mainly as passive or token participants. The final outcome documents were essentially unchanged as if the drafts presented for comment were unimpeachable from the start.

We are especially concerned of apparently official government efforts to close civic space especially for groups and individuals perceived as overly critical. However, such critical voices among civil society are among the most important checks on government actions. This situation has only gotten worse during the COVID-19 pandemic and particularly under the restrictive conditions of a protracted military lockdown.

The Philippine government institutionalized cracking down on activists and critical CSOs when it created the National Task Force to End Local Communist Armed Conflict (NTF-ELCAC) in 2018. This was also made part of the updated PDP 2017-2022, further muddling decision-making and prioritization according to actual development needs.

The task force has resulted in a dramatic increase in human rights violations. On the pretext of “counter-terrorism,” it increased attacks on activists and civil society which have grown in scale and scope. These span vilification, harassment, arrests on fabricated charges, and physical attacks including mounting killings.

And yet the government, in its 2019 VNR on the SDGs, brazenly reported the NTF-ELCAC as one of its best practices for SDG No. 16 on promoting just, peaceful and inclusive societies. Along with other repressive measures, the government has come down hard on collective action pushing for genuinely transformational change.

Along with other repressive measures, the Philippine government has come down hard on collective action pushing for genuinely transformational change.

The COVID-19 crisis has accelerated the closing of what little democratic space is left in the country. The military lockdown since the middle of March is the largest population control measure in the country’s history. Pres. Rodrigo Duterte set the tone from the beginning with a nationally broadcasted order to state security forces to handle lockdown violators by “shooting them dead”.

The Philippines is ranked as having among the militarist and authoritarian responses to the COVID-19 crisis with 152,000 accosted for “quarantine violations” including 38,000 reportedly arrested. Pres. Duterte himself stokes the repressive atmosphere by, for instance, openly encouraging the commission of war crimes and offering up to Php 2 million for every suspected New People’s Army (NPA) leader killed.

The government has also used the lockdown as a further excuse to arrest and detain civil society groups on humanitarian relief missions deemed “enemies of the state.” The president, in one of his weekly addresses to the nation, even explicitly said that activist civil society groups have no place in governance.

The militarized situation is making arrests and detention of civil society members even easier. Just on May 10, military and police raided homes of the peasant group Samahan ng mga Magsasaka sa Coral ni Lopez (SAMACOLO) in Batangas province and arrested members and leaders after planting guns, ammunition and explosives.1 This follows the arrest of 65 relief volunteers, factory workers and activists on May 1, Labor Day in separate incidents in the National Capital Region (NCR), Iloilo province, and Rizal province. The 11 full-time Coca-Cola factory workers arrested were even absurdly presented as supposedly surrendering members of the NPA.

The government is exploiting the COVID-19 crisis to accelerate the closing of civil society space. Lockdowns cannot go on indefinitely and the government has already proposed measures hindering ‘membership-based activities’, large gatherings and mass actions – all vital civil society activities – on the pretext of being unsafe. Yet, on the contrary, we hold that such activities are if anything more essential than ever because of heightened government regulation of social and political life towards containing the spread of the Coronavirus. Civil society activities should not be restricted especially if sufficient precautionary measures are taken.

The draconian military lockdown has resulted in tens of millions of Filipinos suffering the biggest and quickest collapse in jobs and incomes in the country’s history. Emergency relief for over 18 million affected poor and low-income households is however slow and, for most recipients, the income support is not even half the official poverty line. The relief also involved long waiting in congested areas and under stifling summer heat and humidity. The government has already said that cash transfers will already be phased out.

The draconian military lockdown has resulted in tens of millions of Filipinos suffering the biggest and quickest collapse in jobs and incomes in the country’s history.

Meanwhile, the labour department has issued an advisory to enable employers to cut wages for their workers. This is while the finance department is proposing the biggest and most rapid cut in corporate income taxes in the country’s history by the end of the year, drastically cutting government revenues just when funds are needed for COVID-19 response. The country’s biggest stimulus package is also being drawn up but with a bias for foreign firms and corporate giants over social protection, expanding the health system, and supporting small enterprises.

The lockdown was ostensibly meant to ‘flatten the curve’ to buy time to strengthen the capacity of the health system. Yet, after two-and-a-half months, which made it the longest COVID-19 lockdown in the world, public health measures are still inadequate.

Testing and contact tracing capacity targets are still unmet and, apparently, meant to be disproportionately borne by the private sector rather than a public sector responsibility. To date, isolation and quarantine facilities can only handle less than 6,000 cases. The health system has not been expanded and COVID-19-dedicated beds, intensive care units, and ventilators have been mainly carved out of the existing system rather than added. These have even been at the expense of non-COVID-19 cases. Government precautions for resuming daily social and economic life in public spaces and work places are also inadequate.

As it is, the country already has among the highest fatality rates in Southeast Asia. Too many Filipinos are getting sick, lacking critical care, and dying. This can only get worse with the expected surge in cases once the lockdown is relaxed.

Towards socially just and sustainable economy

The COVID-19 crisis is adding untold misery to long-standing problems of Philippine underdevelopment. We reiterate our concern that the government’s overly market-oriented and profit-biased neoliberal development framework results in persistent poverty, hunger and inequality. These have made the people even more vulnerable to unexpected shocks such as the current pandemic.

CPDG joins the rest of civil society in the country in demanding that the Philippine government be held accountable for unremitting poverty and increasing human rights violations in the country. In particular, we join voices calling the government out for its negligent COVID-19 response and opportunistically using the crisis to strengthen its authoritarian rule.

We also take this opportunity to raise the alarm of drastically closing civic space in the country. This can only lead to greater erosion of social, economic and cultural rights and worse attacks on civil and political liberties. CSOs should also be considered essential partners in development especially at these times of great human suffering. We call on the APFSD to provide mechanisms to hold governments accountable for their actions especially at this time of pandemic.

We also take this opportunity to raise the alarm of drastically closing civic space in the country. This can only lead to greater erosion of social, economic and cultural rights and worse attacks on civil and political liberties. CSOs should also be considered essential partners in development especially at these times of great human suffering.

The Philippines and the rest of the world are in the middle of the worst economic and public health crisis in generations. This is a time for united action and not for marginalization. There is also an opportunity to steer our economies onto a new path of development leaving behind decades of outmoded neoliberal policies of liberalization, privatization, and deregulation.

The APFSD’s theme of “Accelerating action for and delivery of the 2030 Agenda in Asia and the Pacific and in the global economy” is possible but only with a human rights-based approach under a democratic and people-centered governance. ###

Remaining quiet has never led to justice: Reflections on a solidarity trip with NutriAsia Workers

Global Launch of People Over Profit

International Conference on Fisheries and Globalization