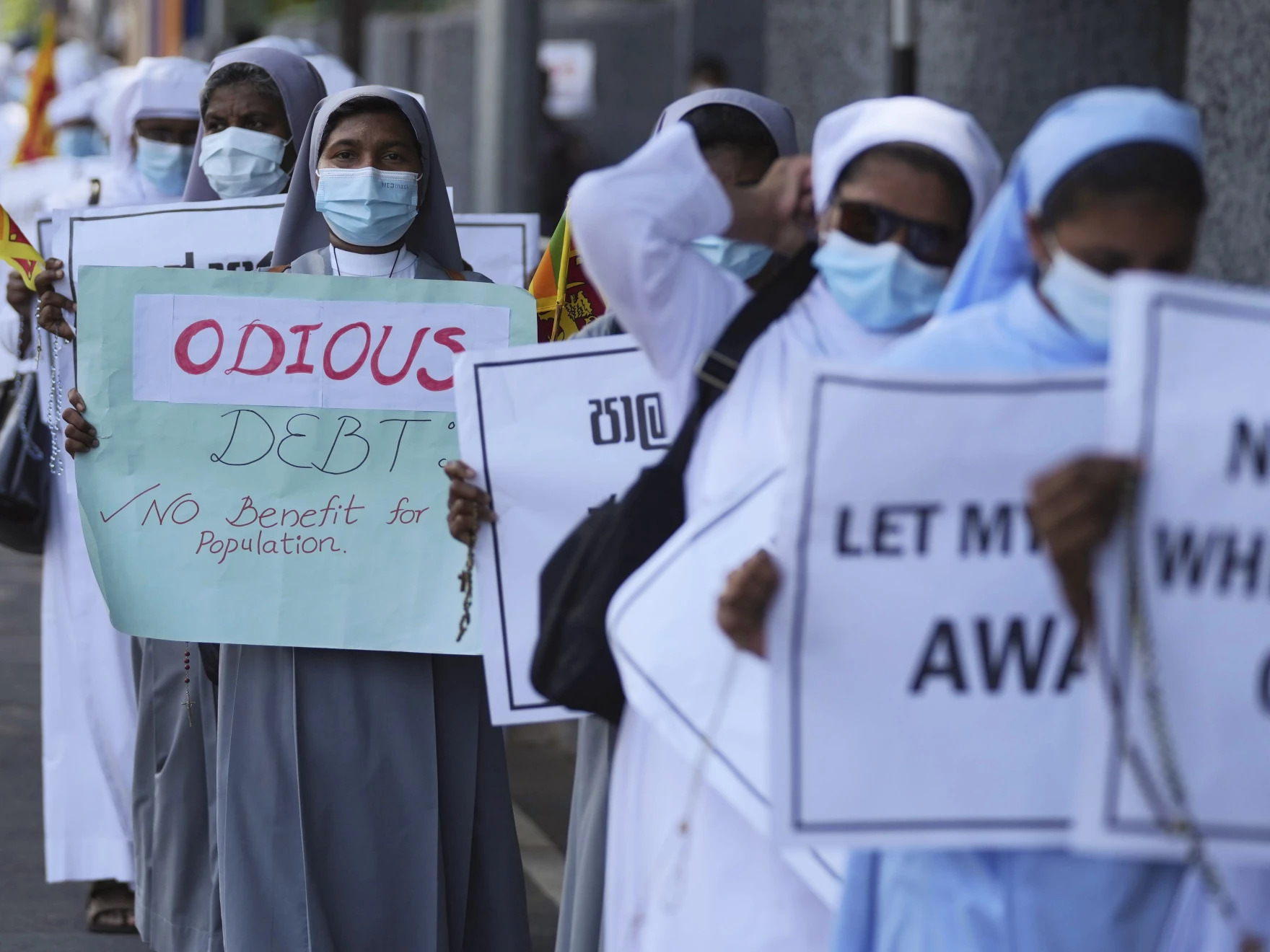 Photo by The National Public Radio via kpcc.org

Sri Lanka is the first Asia-Pacific country in this century to default on external debt. However, economists fear that it may only be the first in a global wave of defaults.

A debt crisis of historical proportions is beginning to engulf the global South amid rising interest rates and soaring prices. The 2020 economic slump, following the breakout of COVID-19, meant declining trade and the exit of investors afraid to lose profits. Southern countries were forced to get more loans, resulting in a global debt rise of USD 226 trillion in 2020, the largest one-year debt surge since World War II. Global debt has already passed USD 300 trillion in 2021 and has been compounded by rising interest rates, surging oil prices, and war.

By the first quarter of 2022, even the World Bank warns that the coming months may see as many as a dozen developing economies unable to pay their debt. The International Monetary Fund (IMF) shows in its conservative estimates that 60% of low income countries are now either at high risk or already in debt distress, a figure that has doubled since 2015.

The international finance institutions (IFIs) that have contributed to the debt problem are now calling for supposed reforms. The IMF and the World Bank are calling for improvements in current debt restructuring mechanisms and “decisive cooperation”. This would involve streamlining and expediting processes in re-negotiating terms, such as around payment deadlines, and covering more indebted countries. These “updates” are supposedly intended to create preemptive rather than reactive approaches to the 21st century’s potential crises. But the track record of these institutions in past crises raises concerns about the frameworks of these responses.

While IFIs and policymakers consider these reforms, the mountainous debt of developing economies are ravaging people’s rights.

The havoc of debt in the global South

Last May, Sri Lanka’s government defaulted, or failed to fulfill due payments, on its foreign debt for the first time in its history. Owing a total of USD 51 billion, the Sri Lankan government has run low on foreign currency needed to service its debt as well as to pay for essential imports such as food, fuel, and medicine. With almost no fuel stocks left, Sri Lanka’s economy has come to a grinding halt.

For Sri Lankans, this has made everyday life a struggle, from daily power outages lasting up to 13 hours, to extended school closures. People faced days-long queues at filling stations for gasoline and cooking gas. An infant in critical condition died before reaching a hospital because their vehicle did not have enough fuel. Pharmacies are running out of medicine and hospitals are low on life-saving drugs. Public discontent has led to thousands of protesters entering the capital, Colombo, last week resulting in the president and prime minister’s resignation.

Most of Sri Lanka’s debt is owed to private lenders, constituting 47% of the country’s foreign debt. Multilateral development banks hold 22%—the Asian Development Bank 13% and the World Bank 9%—while China and Japan each hold 10%.

Sri Lankan governments have been increasingly borrowing from international capital markets since the early 2000s. Market borrowing has added serious risks to Sri Lanka’s balance of payments since loans from capital markets have higher interest rates and shorter durations of repayment. Despite this, the IMF continued its lending to Sri Lanka, approving five loans between 2001 and 2016—adding to the country’s debt obligations rather than reducing it.

Sri Lanka is the first Asia-Pacific country in this century to default on external debt. However, economists fear that it may only be the first in a global wave of defaults. Ghana, Tunisia, and Egypt are among the African countries whose foreign reserves risk to be insufficient to cover upcoming due payments.

Inflation in Ghana has reached 27.6% and raising its interest rates to 19% has failed to stop rising prices. Water and cereal products are some of the food prices with the largest increase. Ghanaians are already taking to the streets to protest. Ghana, Africa’s second-largest gold and cocoa producer, is already in talks with the IMF for another loan after recently reversing its decision not to seek assistance from the multilateral lender. It may seek as much as USD 1.5 billion to add to its debt stock which already stood at 76.6% of its GDP by the end of 2021.

In Tunisia, high commodity prices are quickly eating away at its foreign currency reserves, which are now just enough to pay for four months of imports. Amid rising fuel and cereal prices, queues for bread grow as wheat supplies dwindle.

Argentina, which just emerged from its latest default two years ago, is heading towards another debt crisis. Poverty has already risen by over 43% and the country is set to face a 60% inflation by the end of the year. Many Argentinians’ incomes are not enough to afford even basic foodstuffs.

The Philippines, meanwhile, has a steady flow of foreign exchange from overseas remittances. This, at the moment, allows the government to continue paying its USD 109 billion foreign debt (the country’s total government debt, including borrowing from domestic sources, is at PhP 12.7 trillion or around USD 225 billion). But this is not to say that all is well when Filipinos are facing skyrocketing prices, falling incomes, and chronic joblessness all while prioritising debt repayment. The Philippines’ finance department, with the country being the World Bank’s top borrower, recently proposed new taxes on personal income and consumer goods to raise revenues for debt servicing.

While the Philippines is, presently, not yet in a situation like Sri Lanka’s, it lacks a strong industrial base and has been shaped to be dependent on foreign capital. This means that the Philippines shares the same vulnerabilities as other Southern economies that make them prone to debt distress and crises.

This is an article in two parts. Read the second part here.

Alexander Dy is studying Philosophy, focusing on International Relations, at Ateneo de Naga University. He is currently an intern at IBON International to further his understanding of the international and socioeconomic structures that affect the development of the global South. He is an activist in Philippine social movements working for people’s rights and genuine democracy.

The recovery agenda: Where do we go from here?