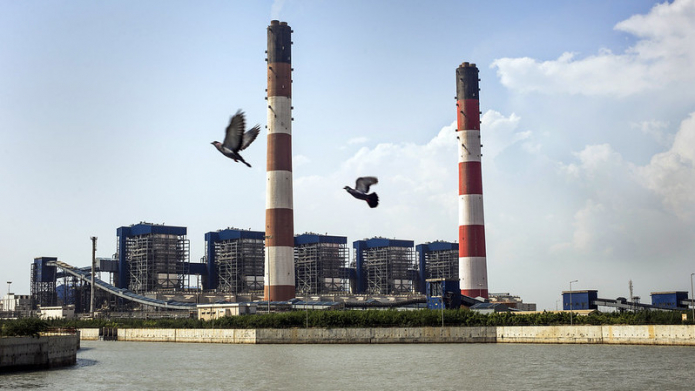 Despite its avowed support for clean energy transition and sustainable development in the region, ADB continues to reinforce Asian economies’ dependence on fossil fuels, posing significant threats to the environment, the climate, and peoples’ rights.

As the Asian Development Bank conducts its virtual Annual Governors’ Meeting on September 17 to 18, IBON International along with other civil society and peoples’ organisations in the region is holding the Bank to account for its lingering legacy of financing dirty energy in Asia Pacific. Despite its avowed support for clean energy transition and sustainable development in the region, the Bank’s institutional policies and lending portfolios continue to reinforce Asian economies’ dependence on fossil fuels, posing significant threats to the environment, the climate, and peoples’ rights.

The ADB has a history of financing large coal projects. The Natural Resource Defense Council found that between the years 1994 – 2012, the ADB has been the third largest international public financier of coal- fired power plants, investing $3.9 billion in 21 projects. Evidence shows that the publicly-financed institution, despite mounting opposition from stakeholders, shareholders, civil society, and local communities, does not intend to veer off the same unsustainable path.

A few weeks prior to the Annual Governors’ Meeting, the ADB Independent Evaluation Department (IED) report published on August 31 revealed that between 2009 and 2019 the ADB approved a total of USD 2.06 billion in financing for coal-fired power plants, or about 4.8 per cent of its energy sector portfolio. Among these are the Tata Mundra Ultra Mega Coal plant in India, the Jamshoro coal-fired power plant in Pakistan,  and the Visayas Base-load coal power project in the Philippines, projects that the Bank pursued, ignoring the overwhelming evidence of their negative social, environmental, and health impacts to affected communities and fierce opposition of civil society organisations.

Between the years 1994 – 2012, the ADB has been the third largest international public financier of coal- fired power plants, investing $3.9 billion in 21 projects.

The data exclude other types of fossil fuel project such as on fossil gas (so-called “natural gas”) and oil, and supposedly renewable but high-carbon energy sources such as hydropower and geothermal that the Bank has significantly poured resources into over the last 10 (ten) years.

Driving ADB’s high carbon energy portfolio is its outdated and largely inadequate 2009 Energy Policy. The policy has allowed the bank to invest in false solutions such as “clean coal”, carbon capture and storage, and “natural” gas-based power generation.

But rather than promote the shift of developing member countries (DMCs) to a low GHG emission development path, the policy has only locked in DMCs to fossil fuel-based energy systems. Rather than stem coal consumption in the region and ensure the development and delivery of affordable and reliable renewable energy sources, the policy has only resuscitated the sunset industry of coal with the promotion of so-called “clean coal” technologies.

Like all the major multilateral development banks (MDBs), the ADB has committed to aligning its operations with the Paris Agreement goal of holding global temperature rise to well below 2°C and pursuing efforts to limit this to 1.5°C. In 2017, along with other multilateral development institutions and member institutions of the International Development Finance Club, the Bank reaffirmed its commitment to the same climate deal. But even the Intergovernmental Panel on Climate Change (IPCC) has warned that the ambitions stated by worldwide governments in the Paris Agreement are already low and no longer enough to limit global warming to 1.5 degrees Celsius.

The ADB is out of step with the Paris Agreement; more so with the latest recommendations of climate science. It is highly concerning that in the last five years the Bank has not made any efforts at bridging the yawning gap between its policy and international norms.

As DMCs affected by the COVID-19 pandemic rebuild their economies, the ADB is uniquely placed to ensure that its resources are maximised to support DMCs’ shift to low carbon development pathways.

To achieve this, the ADB should divest from all coal mining and power projects and other coal infrastructures. The Bank must categorically exclude fossil fuel generation projects and other high-carbon projects that undermine the region’s effort at reducing carbon emissions to 45% of 2010 levels by 2030 and achieving carbon neutrality by 2050.

The finance provided and catalysed by the ADB will help in the implementation of the UN Sustainable Development Goals and the Paris Agreement in many DMCs.  Delivery of the appropriate and adequate finance is only an initial step forward, however. ADB must bring the rest of its pipelines and portfolios in sync, at the minimum, with the requirements of the Paris Agreement and help DMCs develop and implement more ambitious Nationally Determined Contributions (NDCs) without false solutions.

Systematic and transparent reporting of how ADB’s climate finance impacts the achievability of global and national climate targets is equally crucial to ensure and demonstrate such policy alignment.

Rejection of dirty energy should translate to supporting community-owned and led climate actions and initiatives that promote a low-carbon development path, enhance local peoples’ collective strength, foster equitable and democratic access to energy and other productive resources, and care of the commons. At the minimum, ADB should ensure that its financing does not contribute in the repression and violation of the rights of the communities and their movements advancing these actions and initiatives.

Years of ADB’s climate inaction has already done significant damage on people, environment, and climate. It’s high time for the Bank to quit financing dirty energy once and for all. ###

On the recent crackdown on Indian rights defenders and activists

Politics, economics and climate crisis: the continuous threats to a fisherfolk community that never stops fighting