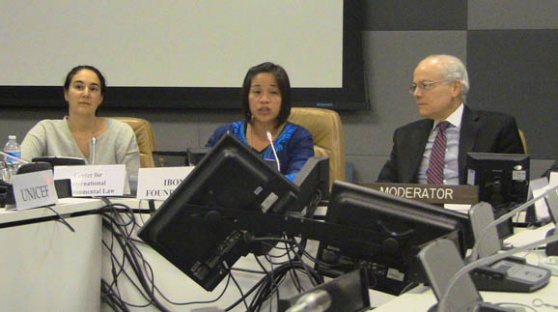 (Remarks made at the side event, “Right at Rio+20: A Rights-based Framework for Sustainable Development” organized by the Office of the High Commissioner for Human Rights, The Missions of Germany, Maldives and Norway with Ibon International, the Center for International Environmental Law and The Council of Canadians, in collaboration with the UNDG-HRM.  April 27, 2012.  UN Headquarters, New York.)
As many of you know, during the previous round of informal informals here in the United Nations (UN), civil society was quite alarmed at the proposals of certain states to delete or weaken or bracket references to rights, equity and important Rio principles which are also grounded on human rights, from the negotiating text for Rio+20.  We initiated an open letter to the UN Secretary General and member states which has been signed by over a thousand organizations from over 100 countries and territories expressing our alarm and calling on them to reaffirm and strengthen rights and Rio principles and be accountable for their implementation.
We are therefore glad to hear at least some member states here who have expressed support for the rights agenda in Rio+20.
We would, however, like to underscore one dimension of the rights-based approach to sustainable development which we believe needs real support and commitment from member states especially those present here.  And this is the international dimension or the collective responsibility of the community of nations to create enabling conditions for the fulfillment of human rights, including the right to development.
By this we don’t just mean the provision of official development assistance (ODA) from the North to the South.  As it stands, ODA is being cut back or being made to subsidize private sector for-profit interests.  But even if developed countries did provide 0.7% of their GDP as untied aid, this would not make a dent in poverty eradication and the shift to sustainable development pathways without major reforms in the international financial architecture and multilateral and bilateral trade rules.
We all know that financial speculation is a major factor behind commodity price volatility and the hike in food prices which impacts on the right to food of the vast majority.  Indeed it is devastating the lives of small rural producers as well as low income households in the urban areas today.  Moreover, much needed financial resources for building “green” productive capacities, generating “green” decent jobs [right to employment] and ensuring universal social protection [right to social protection] is being wasted in speculative trading of financial assets, inflating asset bubbles and causing financial convulsions in the global economy.
Unfair trade rules, including agricultural subsidies in the North, continue to wipe out small agricultural producers from developing countries, driving tens of thousands of impoverished and indebted peasants in India to suicide, to cite just one country.  And developing countries which try to nurture their domestic industries for, say wind power and other renewable energy sources, are hauled to the World Trade Orgganisation’s (WTO) dispute panel.
On the other hand, under the same unfair agreements, governments can also be sued by the big multinational corporations if they feel that their profits are adversely affected by new laws or regulations including environmental standards.
Unfair intellectual property rights regimes built into the WTO and other so-called free trade agreements (FTAs) – rules that none of the developed countries adhered to when they were industrializing – also prevent the more rapid adoption, dissemination, and further innovation of new technologies and production methods, including low-carbon alternatives in developing countries.
So clearly, there needs to be major reforms in the area of international trade, finance and investments if countries, particularly developing countries, are to fulfill their human rights obligations to their citizens and if we as a global community are going to address the challenge of sustainable development.
And yet this dimension of international cooperation is being banished from the Rio negotiations.  For instance developed countries (or at least some of them) are striking out language calling for reform of the global financial system [paras 13 sext, pre 25, 54 bis].   Or language stressing the development mandate of the Doha Round of WTO negotiations [para 65 bis]; or underscoring the need for special and differential treatment for developing countries [para 124]; or calling for transfer of technology [para 125].
We are also concerned with ‘inconsistencies’ in some developed countries who, on the one hand, champion human rights – but on the other hand also earnestly support mechanisms such as REDD(+) that uphold carbon markets, enclosures of commons, and lead to displacement especially of indigenous communities and local communities.  This is a perversion of the Rio ‘polluters pay’ principle – and allows developed countries’ a convenient excuse to evade their historical responsibility for the overexploitation of the atmospheric and biospheric space.
The developed countries also appear consistently opposed to references to the Right to Development – which best expresses this international dimension — despite it being endorsed by the General Assembly in the 1986 Declaration on Right to Development, the 1992 Rio Declaration as Principle 3, and in numerous other political declarations endorsed by heads of state.
We thank you for the progressive positions taken in these negotiations that uphold and promote human rights, and we sincerely hope that you will remain steadfast with these positions despite many pressures.  However it is not enough for you to endorse or support SOME human rights language in the outcome document, but not others.  You cannot be selective on the set of human rights that you will support.
We call on governments to support the right to development and in so doing, support proposals for reforming international finance and trade to uphold commitment to human rights, freedom and genuine sustainable development.  We need you to ensure that references to human rights are not only kept in the Rio+20 outcome document but also reinforced by participatory monitoring and accountability mechanisms.
Twenty years after the Rio 1992 Earth Summit, surely we should expect more, nothing less!
Tags: ODA, RIO+20, UN, WTO