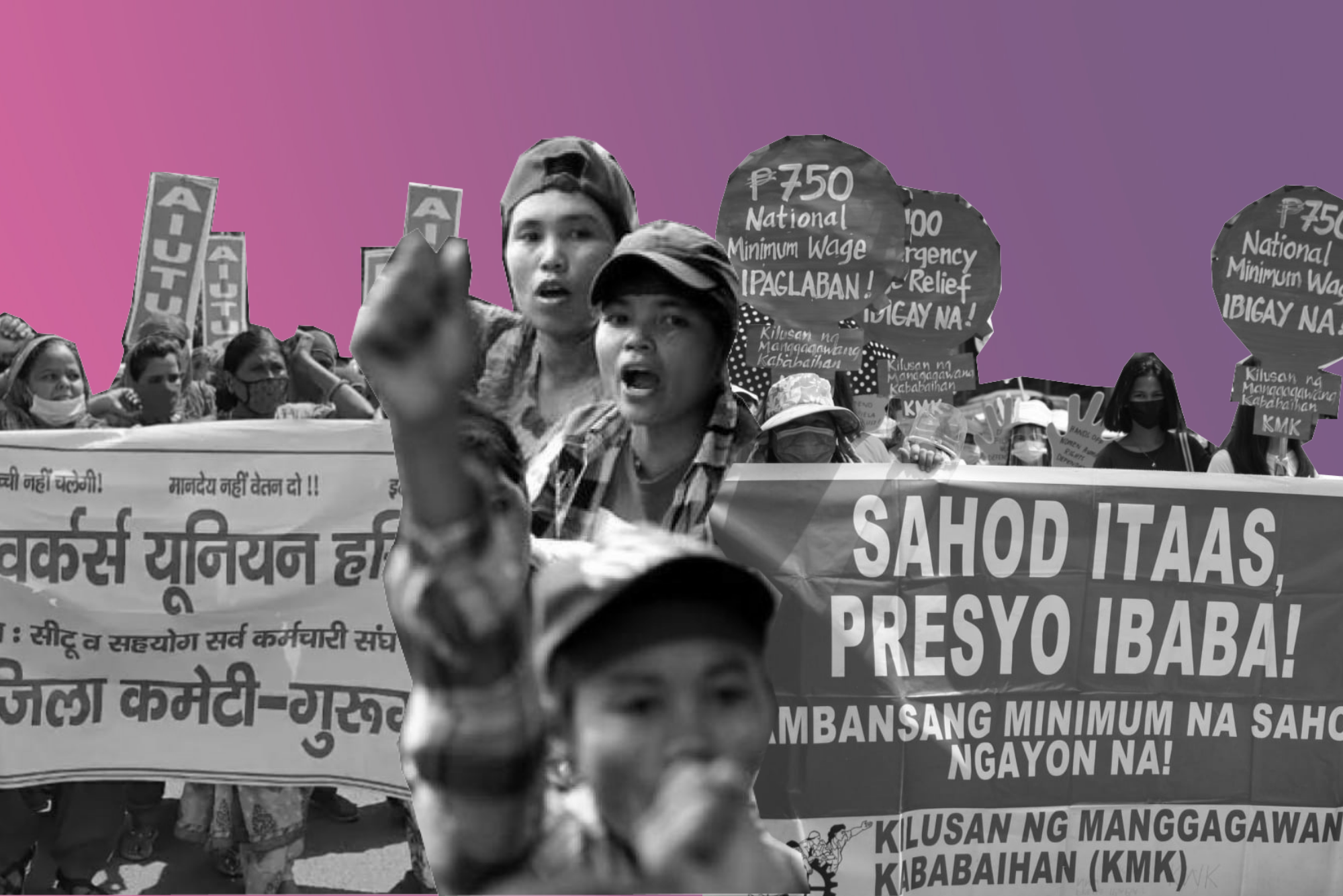 People’s rights are not guaranteed under the dominant global system, and women from working classes have shown that these can only be claimed by exercising people’s sovereignty through organised collective actions. We believe that the strength of women workers, farmers, fisherfolk, and Indigenous Peoples is crucial for system change and social transformation in their communities, their countries, and even at international level.

Women celebrate International Working Women’s Day on March 8 because thousands of women garment workers went on strike for higher wages, better working conditions and against global powers’ wars more than a century ago. IBON International recognises and celebrates the significant roles of women, especially from the working people and the poor, in advancing people’s rights and sovereignty especially today.

People’s rights are not guaranteed under the dominant global system, and women from working classes have shown that these can only be claimed by exercising people’s sovereignty through organised collective actions. It often means standing up against corporations, elite-led states and confronting state violence.

Striking women garment workers in Burma are among millions in Asia who lost their jobs when corporations refused to pay for their orders amid the pandemic. Unionised garment workers who asserted their rights to work, wages, health and safety were especially targeted. Today, despite insecure economic conditions and state violence, the women workers launching general strikes across Burma are fearless and ready to assert their rights in a “situation [that] will only deteriorate under military dictatorship,”[1] as their fight for living wages and other economic rights is tied to resisting a military dictatorship that monopolises, exploits and sells people’s resources to foreign corporations. Ethnic nationalities who are persecuted and displaced from their ancestral lands to accommodate corporate interests expressed their support to workers’ strikes and the civil disobedience movement in the cities, and related these to their struggle for self-determination.

The women workers launching general strikes across Burma are fearless and ready to assert their rights as their fight for living wages and other economic rights is tied to resisting a military dictatorship that monopolises, exploits and sells people’s resources to foreign corporations.

In India, women workers, farmers, and farmworkers continue join massive protests against the current neoliberal agricultural laws that would destroy their livelihoods. Hundreds of farmers were killed by state violence and neglect during protests in harsh weather. State actors even resorted to cultural prejudice to weaken the movement, telling women to leave the protests and attend to their “duties in their homes.” Women’s participation and even leadership in the protests highlighted their struggles against corporate and elite land monopoly as well as feudal-patriarchal relations that do not value their labour, burden them with housework, and foster gender disparity in land rights.

In the Philippines, women’s economic conditions worsen in the world’s longest lockdown under President Duterte. A conservative estimate shows that unemployment among women increased by 15.6% in 2020, as workers in low-paying jobs were the first to be laid off. Peasant women suffered from neoliberal policies and lack of government production support and aid amid the lockdown and the consecutive typhoons in late 2020. Women’s rights defenders and groups who respond to communities’ needs and rights are killed and attacked. According to 2020 data, there were already 40 women’s rights defenders killed and 100 women political prisoners under Duterte.

We are furious that elite-led states are violently lashing out against women’s movements across the world. Over 50 people were already killed in protests against the military dictatorship in Burma, including 19-year-old protester Kyel Sin.

In the Philippines, killings and attacks against activists intensify under the counter-insurgency program and Terror Law. On March 7, at least five activists were killed and three were illegally arrested—including the killing of woman fisherfolk leader Chai-Lemita Evangelista, and arrests of organiser Elizabeth Camoral and of Nimfa Lanzanas, an advocate for political prisoners. President Duterte, who recently ordered to kill all communist insurgents and “forget about human rights,” encourages attacks against women rights defenders and activists. The government’s National Task Force to End Local Communist Armed Conflict licenses the brazen state massacres as it refuses to distinguish between armed rebels and civilian activists in order to classify the latter as military targets.

Women’s movements in the Global South show that their historical resistance against corporate exploitation and militarism continues. IBON International joins women who commemorate Women’s Day with joy and fury. We are inspired by the working class and marginalised women who raise demands for people-centred, health-based solutions to the pandemic, stand up against authoritarian regimes and work for system change.

We condemn states’ pouring of resources to reinforce militarist regimes, while embracing profit-oriented pandemic responses that are depriving working-class peoples’ access to basic healthcare, including vaccines. Meanwhile, international financial institutions and intergovernmental institutions are pushing for an economic “recovery” that would maintain existing oppressive systems and power structures.

When the pandemic exposed the world’s feeble, decaying systems in 2020, transnational corporations, elite leaders and their institutions only offered hollow words and brute force to protect their wealth and reinforce their power.

Women have been at the frontlines – they have been caring for the sick in hospitals and homes, producing goods in the factories and farms, striving to continue their children’s education as schools remain closed, and have been bravely facing the guns of the state to demand and uphold people’s rights and sovereignty. We believe that the strength of women workers, farmers, fisherfolk, and Indigenous Peoples is crucial for system change and social transformation in their communities, their countries, and even at international level.###

In an era of needed radical shifts: More of the same to come from the ADB?