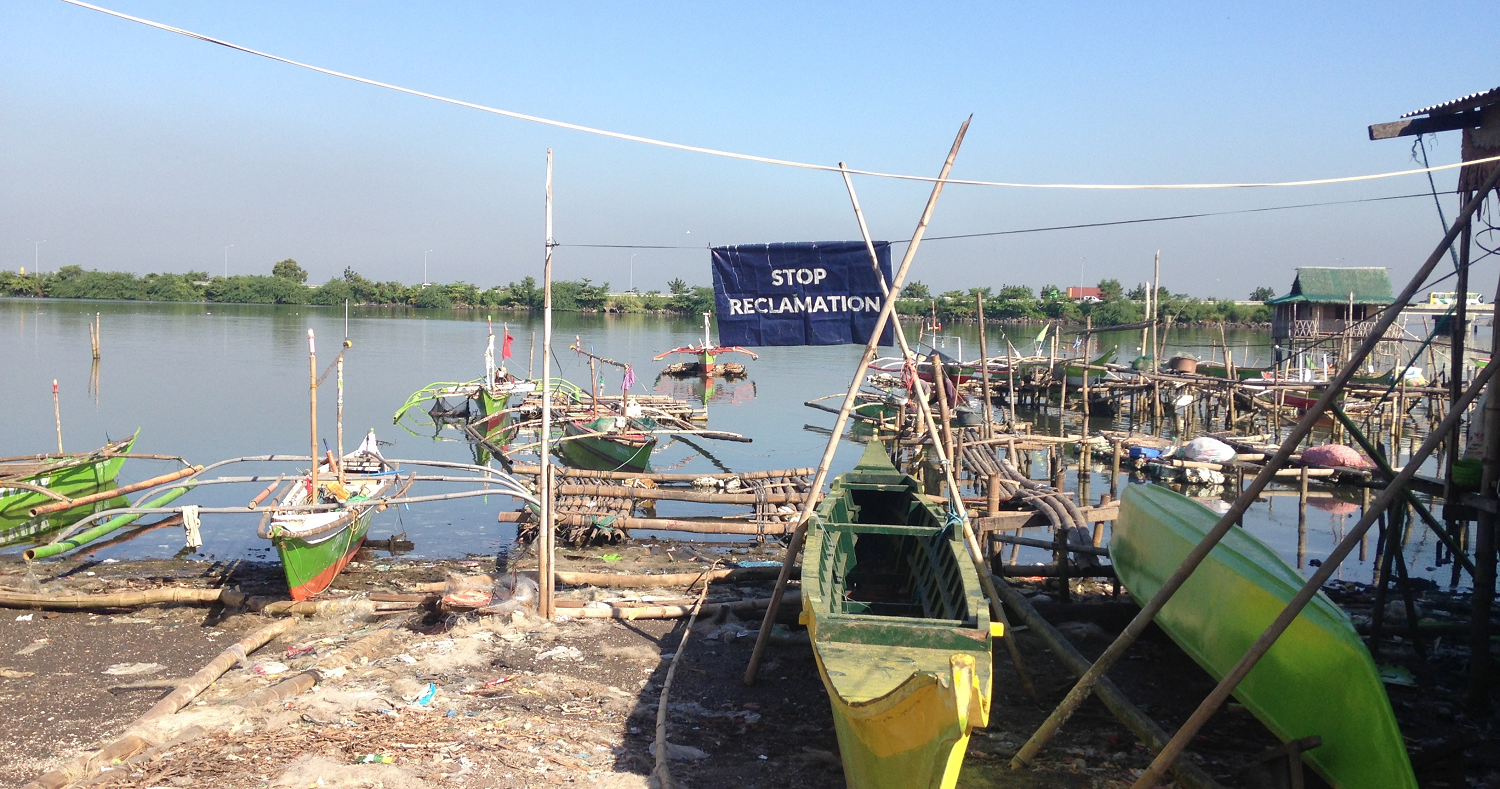 Marta is an intern at IBON International, pursuing a Masters in International and Environmental Security at the University of Groningen, in The Netherlands. These are her reflections from a trip to a fisherfolk community last October, as part of the organisation’s internship program. Fisherfolk communities on the coasts of the Manila Bay have been under threat of government reclamation, such as Maliksi III in Bacoor, Cavite, which is the subject of the article. But this is the case as well in Brgy. Taliptip in Bulakan, Bulacan, and other Manila Bay coasts as well. With this article’s release on World Fisheries Day, we join communities’ calls: “No to Reclamation, Save Manila Bay!”

Politics and economy influence all aspects of our lives. However, in recent decades, global society is also deeply threatened and affected by the environmental crisis. Nonetheless, this climate emergency coupled with economic and political factors can be a nightmare for those who depend entirely on nature for their livelihood. This is the case for several fisherfolk communities a few kilometres away from the Manila, in Bacoor city, a coastal area in Manila Bay. These communities, such as Malaksi III or Talaba II, are fully linked to the sea and their source of livelihood is fishing.

The hundreds of inhabitants of these communities live in humble houses built with tarps and bamboo. An entire family lives on a few square meters and shares everything that they have. After a suspicious fire occurred in Maliksi III on April 2017, more than 500 families and over 300 hectares of land were affected, and people had to start over[1].This fact further complicates the lives of these people which depend on external decisions and outside actions. A hundred fishermen, who go out to the sea every afternoon at 4 pm to return around 2 am with what their nets have scarcely caught, deal every day with political and economic issuesthat have produced terrible environmental degradation in the area.

Furthermore, the reality of poverty that they face living in these communities only makes the situation worse. The numerous environmental problems that these communities suffer spare no one and directly affect the way of life of all people. Since they live from the sea and from fishing, the main problem they face is the state of the water. Recently, numerous dead fish have been spotted and fishermen claim each time, the quality and quantity of their catch  decreases. Fisherfolks’ families assert that 10 years ago theircatch could yield up to 10 kilograms. But now at best, they could catch only 3 kilograms.

Water pollution is noticeable. Plastic waste floats along the entire coast and the colour of the water is completely dark. Older women claim with sadness that 30 to 40 years ago the community was very different, “We could bathe in the sea.The water was clear and clean”.

This problem has been affecting Manila Bay for more than a decade. Industrial wastes from the city of Manila and neighbouring areas go to the waters of Manila Bay and polluting it. Therefore, fishermen have to navigate 3 to 4 hours’ round trip every day in order to get to a place where they can fish in a non-polluted area.

These projects have tremendous consequences on the environment and on neighbouring communities. Reclamations are a terrible threat to marine life and water birds and destroy the mangrove forest areas thatprotect the coast from waves and typhoons. Also, these projects are highly dangerous. Reclamations have changed the movement and flow of the waters resulting to a stronger and higher rush of seawater toward the coast, producing massive flooding, liquefaction, and land subsidence[3].

Even water biodiversity is changing in Marina Bay. Some fishermen claim catching tahong, the mollusk that used to be more abundant in Manila Bay, becomes more difficult each day. A new variety of mollusk has appeared but is much more difficult to sell because of its low quality. According to international organizations such as Oceana[4], “the dump-and-fill projects are in pursuit of economic and infrastructure facelift at the expense of the environment and the safety and livelihood of the people.”

The consequences of reclamations are not limited to environmental degradation and deterioration of the area. They directly affect people in these communities. The communities not only find difficulties in their relationship with nature because of reclamations and environmental degradation, but because the government’s reclamation projects take place in the same areas where Maliksi III or Talaba II are located. In order to carry out these projects, the government plans to relocate people in these communities in other areas of the country, away from the coast, depriving these people, not only of their homes and lives, but forcing them to completely change their ways of life. “We are very worried. We do not know if tomorrow we will get upand we still have a source of livelihood”, claims a woman which, as the great majority of the community, is concerned about her future.

Despite the difficulties, many people in the communities are fighting and mobilizing against these projects. With the help of Pamalakaya (Pambansang Lakas ng Kilusang Mamamalakaya ng Pilipinas, or the National Federation of Small Fisherfolk Organizations in the Philippines) the project that the government wants to carry out in the Maliksi III area and neighbouring communities has been momentarily paralyzed, and people continue fighting. “I want to stay here. I’m a fisherman and nobody has to take away my house or my work for their own interests”, claims a fisherman in Maliksi III. In addition to the great work of Pamalakaya, other organizations such as Center for Environmental Concerns (CEC) are contributing to the improvement of the situation of the communities. For example, the CEC has recently organized informational workshops and environmental training so that the inhabitants of these communities understand what climate change is at the local, national and global levels, among other things.

Greater visibility is needed. People in these communities need to be heard. Despite their efforts and those of organizations such as Pamalakaya or CEC, as long as the economic and political interests of the powerful few dictate the control and use of resources, the environmental situation will continue to worsen, endangering the future of hundreds of families who, in spite of everything, will not stop fighting. #

Opportunities, challenges to sustainable development, as HLPF opens in 2019

International Conference on Fisheries and Globalization