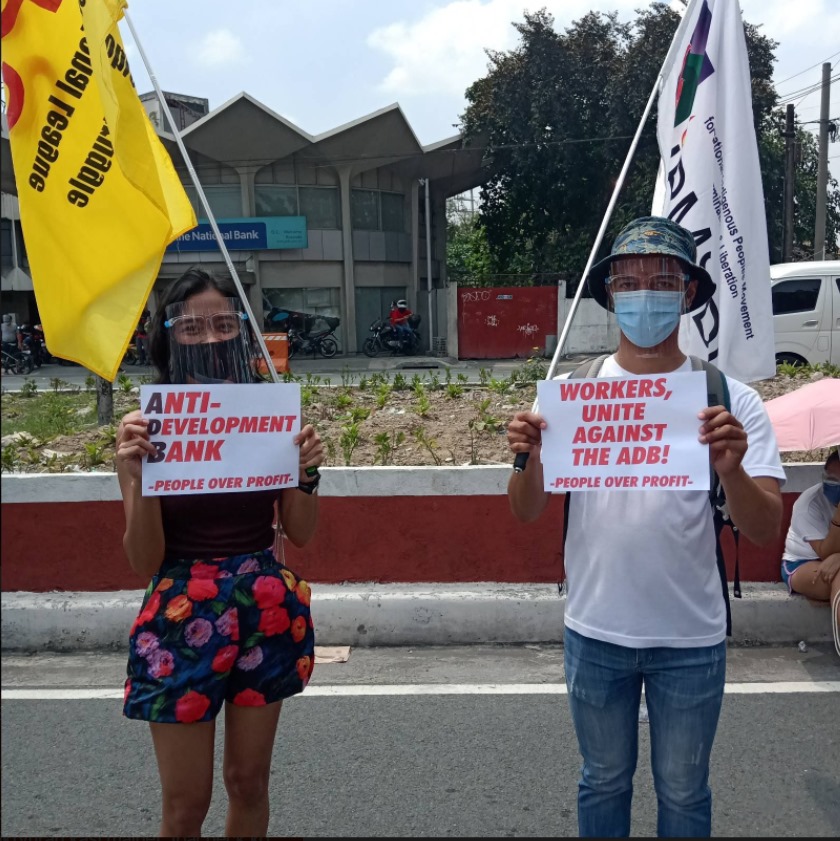 Photo by the People Over Profit

IBON International denounces the Asian Development Bank (ADB) business-as-usual approach, as reflected in its recent 54th Annual Governors’ Meeting: its continued prioritisation of loans, which further sink developing countries and their peoples into the quicksand of debt, and its current institutional strategy, the Strategy 2030, whose energy and infrastructure drive puts profit interests over people’s development.

The Japan- and United States-led ADB’s priorities largely constitute a continuation of old policies which have widened income and wealth inequalities even before the pandemic, and worsened the impacts of today’s economic and health crises to peoples in the global South.The Bank’s call for “resilient and green recovery” is a repackaging of pre-pandemic, neoliberal policies—the privatisation of services, the liberalisation and de-regulation of economies, and an overall reliance on big private sector and finance. It serves as an Asia-Pacific counterpart of the various institutions’ chorus for corporate recovery.

A business-as-usual in debt

The Bank worsens countries’ debt burdens with its pandemic-period USD35 billion borrowing programme,[ii] which threatens people’s economic rights through increasing consumer taxes and shrinking public budgets for services, in order to pay debts over many generations. And as certain governments in the region are closing civic and democratic spaces to crackdown on people defending their rights, the Bank’s lending to militarist and repressive regimes such as in Myanmar and the Philippines consolidate repressive rule at the expense of rights and development. It is thus absurd that, in this context, the US representative to the Annual Meeting describes the ADB’s “unsustainable lending path” in terms of the loss of resources for the Bank.[iii]

The Bank’s current appeals to progressive taxation, from imposing more taxes on the wealthy, to mobilising domestic resources[iv]and social protection, if not scrutinised in the context of its historical role in policies that attacked Southern peoples’ economic rights, could be a smokescreen while it treads old paths. Such ADB-driven tax measures at country-level will be pursued via loans with strings attached through policy conditions, and greater influence of the International Monetary Fund (IMF) and tools that promote the private sector as the main economic engine. They serve to introduce new means for the Bank’s old ends.

Furthermore, IBON International is alarmed at how the ADB’s new, draft energy policy, announced at the close of its Annual Meeting, shapes supposedly green projects as a mere new market for businesses. While the decision to end financing of coal projects is a belated response to long-standing people’s demands and decades of climate change,[v] it still allows extraction of other fossil fuels, such as natural gas.

In continuing the Bank’s Strategy 2030, the policy simply echoes the same promotion of private capital investment. It stresses the “catalyzing” of private finance through so-called blended finance and public-private partnerships (PPPs), despite how these increase debts, use public resources to subsidise private capital and its profits, and how PPPs’ privatise services. It is open to the “corporatization” of utilities and “the privatization of public enterprises.” It reproduces narratives that take questions of power and rights out of development by framing it as but a matter of filling gaps in financing.

The Bank’s drive for big business to shift to supposed green energy projects is mirrored in its promotion of private finance for “climate-resilient” infrastructure especially for fragile and conflict-affected states. Current rhetoric on infrastructure, as aligned with G20 priorities,[vi] remains challenged by the record of nominally “green” projects that actually resulted in rights violations against peasants and Indigenous Peoples (IP). It gives big businesses a new source of profits, while downplaying the growing recognition of the roots of the climate crisis in the monopoly capitalist drive towards resource extraction and exports, and other unsustainable production practices.

Away from the ADB’s repackaged, pre-pandemic agenda

IBON International asserts that greater ambition and more substantive policy shifts are urgent for people’s needs and long-term, sustainable development. Private sector-driven approaches and the broader neoliberal framework still need to be reversed, in order to facilitate cancellations of debt burdens, establish a coherent progressive taxation of wealth, and allow for capital controls, and financial and investment regulation for people’s needs and vibrant domestic economies.

Instead of worsening the people’s debt burdens during the pandemic, it is high time to cancel Southern debts to the ADB. Towards climate justice, there is a need to shift the focus on “investment climates” towards addressing the monopoly capitalist roots of the climate crisis. Climate finance commitments to developing countries must be fulfilled. Climate finance, in grants and not loans, should go on top of historical official development assistance (ODA) commitments of 0.7% of gross national income. Finally,aid flows should be oriented to end inequality and not just “catalyse” private investment.

Organisations and movements of working peoples—of workers, farmers, Indigenous Peoples, women, among others—should continue to assert their primary roles in shaping and leading development processes that affect them and their future. Together with civil society, they should tackle the unequal terrains marked by the major influence of international financing institutions (IFIs). At the national level, working peoples have the biggest stakes in determining health policy, decisions around loans, grants, and investments, and climate action. At the global level, it is crucial for the people to claim their rightful place in global development policy platforms, alongside IFIs and capital. The current context calls for nothing less than such social transformations for people’s development. #