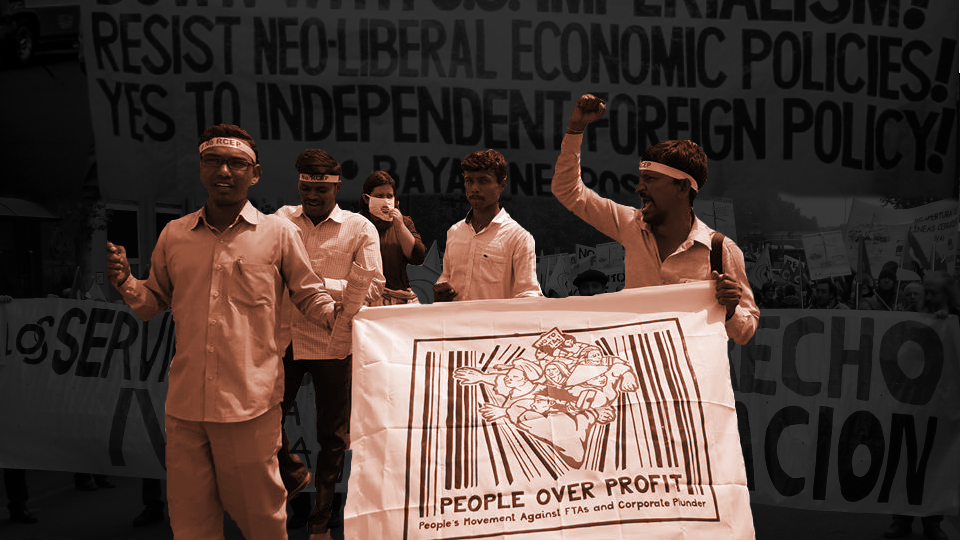 Recent data point to how the people lose in the time of neoliberalism: the top 10 corporations’ combined revenue for 2015 is greater than that of 180 countries;[i] while more than a billion of the world’s poor are landless, with the unemployed to reach 200 million.[ii] People’s demands to end neoliberalism drove a few international institutions to finally admit the agenda’s failures.

Following years of outright complicity, the International Monetary Fund (IMF) conservatively declared that only “aspects” of the neoliberal agenda worsened inequalities, such as openness to short-term speculative investments and austerity.[iii] The United Nations Conference on Trade and Development (UNCTAD), meanwhile, lamented increased corporate power at the expense of government regulation; and worsened debt situations and inequality in many countries in the last decades.[iv]

Such admissions only affirm longstanding demands by peoples who are at the receiving end of austerity, trade and investment liberalisation, privatisation of social services and state assets, and deregulation of important sectors. They have long demanded the end of neoliberal attacks especially in the global South, amid collusion among the IMF, the World Bank Group (WBG), and other international financial institutions.

People’s organisations opposed market fundamentalism, even before the UNCTAD called it a “fallacy [that] should be dropped”.[v] They were already condemning state complicity in stepping back regulation of multinational corporations (MNCs), whose interest is in amassing “surplus profits” through unequal relations with developing countries.Various civil society organizations (CSOs) had already reasoned that Public-Private Partnerships (PPPs) worked for big business at the expense of people,[vi] ahead of the UNCTAD classifying PPPs as “raiding public sectors”. Movements have long stood against United States’ corporate interests in free trade agreements (FTAs), and against recent FTAs that threaten people’s access to social services and even seeds.

It is ever pertinent to heed people’s calls to finally end decades of neoliberalism around the world. This could not be expected to come from multilateral institutions[vii], which have been forwarding privatisation and liberalisation. For instance, the World Bank Group (WBG) has been an active promoter of PPPs; the Asian Development Bank pushed projects that benefited corporate interests.[viii]

To end neoliberalism, bringing back state regulation of corporations would be essential. The UNCTAD policy proposal for a “Global New Deal”[ix] points to this, but comes short of recognising that governments in the global South could be, and in many cases have been, captured by domestic elites and elite interests in rich industrialised countries.

IBON International contends that genuinely ending and building alternatives to neoliberalism could only be achieved by putting people at the centre of development. This means, on the one hand, country-level frameworks that enable political and economic power for peoples and their organisations, allowing them to hold governments accountable and forward greater regulation of multinational corporations. On the other, this means orienting the state institutions, including development agencies and plans, away from prioritising foreign investment and “economic growth” for the few, but towards addressing people’s political and economic demands.

These demands range from decent, full employment and a just minimum wage; to self-determination and liberation for indigenous peoples; right to land for small-holding farmers; and even more fundamental changes in the dominant economic system – demands that conflict with domestic and foreign elite interests in the global South. All these would guarantee the people’s right not only to enjoy but to participate and contribute to their economic, social, cultural and political development[x], towards sustainable development by and for the people.

Further, IBON International sees it necessary for peoples to urge their states to look into the impacts of IMF, WBG, WTO and multilateral development banks’ policy and programs on the ground, and expose the extent that these deviated from principles of national sovereignty, people’s rights and complementarity. People’s organisations and CSOs should alsocast a watchful eye on the “legally binding treaty on transnational corporations and human rights” currently in the UN agenda.

It is true, as the UNCTAD report claims, that it is high time to move away from “the abiding neoliberal refrain that ‘there is no alternative’”. It is time to fulfil people’s demands to end neoliberalism. But instead of another policy strategy that merely postpones another crisis (i.e., Keynesianism in the 1930s and after, and then neoliberalism in the 1970s), economic history shows the need not only to bring the state back into the fore, but also entrench a people-led and people-centred framework to pull at the roots of global monopoly capitalism. ##

[v] The UNCTAD’s 2017 Trade and Development Report argues: “The notion that markets, left to their own devices, can deliver socially and economically optimal outcomesis a fallacy and should be dropped. The experiences of recent years – as during other major crises of the last century − are a powerful reminder that the State can and must reform and adapt markets at all levelsto create an environment that can deliver growth and development for the population as a whole.”

[vii] A hint of admission of the failures of the neoliberal policy track only came in 2016 through “Neoliberalism: Oversold?”

[ix] The report acknowledges that this draws on the arguments of Keynes’ solution to the Great Depression of the 1930s, and the experiences of the Marshall Plan (which on the pretext of aiding war-torn states was driven by US interests to consolidate power).

US and EU must show leadership and responsibility in climate talks