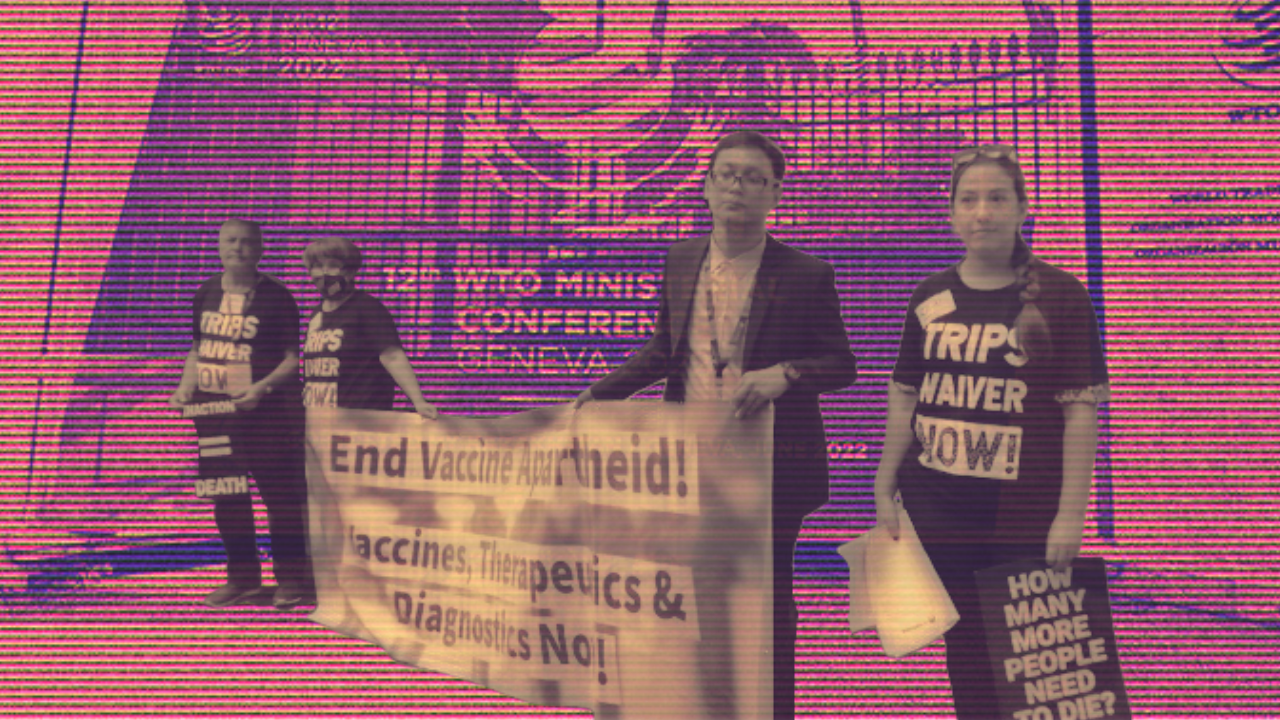 Photos: Our World Is Not For Sale; World Trade Organization

Big Pharma and their developed country backers have no interest in saving lives and ending the pandemic at the soonest possible time, only in protecting their oligopolies and massive profits for their executives and shareholders.

“No one is safe until everyone is safe.” The threat of breakthrough infections caused by future variants of SARS-CoV-2 has brought to fore the need for increasing the global effort to scale up production of COVID-19 vaccines, treatments, and diagnostics. Not only does global vaccine inequality persist in least-developed countries (LDCs) where, as of February 2022, only 28% of the overall population has received at least one shot, but so do inequities in terms of diagnostic capability, with LDCs accounting for only 1% of the total number of COVID-19 tests globally. Women especially have borne more social and economic fallout from the effects of the pandemic.

This week, the WTO held its 12th Ministerial Conference in Geneva, Switzerland, but the prospects of even suspending the TRIPS—much less ending it—have been dismal.

A waiver of intellectual property rights relating to COVID-19 treatments, diagnostics, and vaccines under the TRIPS Agreement was proposed in October 2020 by India and South Africa. This was long before the first COVID-19 vaccines were even granted emergency authorisations. However, big pharmaceutical companies and their patron states in the United States and the European Union have constantly opposed a waiver on the grounds that such artificial monopolies (ironically promoted under a multilateral free trade framework like the WTO) incentivise investment in pharmaceutical innovation and biomedical research. They further argue that there is enough flexibility in the existing rules under the TRIPS Agreement.

This, of course, is plainly untrue, if the policy and market failure that precisely enabled the current pandemic is to be taken into consideration. The reality is that the present pandemic has long been predicted and governments offered funding in the direction of research on the coronaviruses.

Public health priorities, such as infectious diseases coming from coronaviruses or ebola and the danger posed by future antibiotic-resistant bacteria, and Big Pharma investment were and continue to be misaligned, as the industry is mainly interested in “blockbuster drugs” treating chronic conditions such as cancer, diabetes, hypertension, and high cholesterol. These drugs are considered by pharmaceutical companies to be consistently high and lasting revenue streams, paid for by patients over a long period of time and with high spending power. In contrast, investment in infectious diseases is considered risky. Epidemics often happen in places with low spending power and people either become immune or die shortly after getting infected. Exploratory research in this area, therefore, is mostly initiated by research teams in universities and small startups, not Big Pharma.

When the pandemic arrived, Big Pharma still opportunistically jumped on governments pouring billions of dollars of taxpayer money in the form of additional research funding and advance purchase agreements, which put poorer countries at the back of the queue, while letting the industry set the rules in the area of intellectual property. This effectively shifts the investment risks to the public sector but sharing none in terms of intellectual property rights.

Moreover, the same countries and corporations undermining the waiver proposal today have been opposing the use of public health flexibilities under TRIPS (e.g. compulsory licensing) even before the coronavirus pandemic, threatening governments with “litigation terrorism” under bilateral investment agreements. One infamous case is that of US pharma companies against South Africa during the HIV-AIDS epidemic, where the interests of monopoly capital endangered the lives of millions of Africans infected with the virus.

After several months of quadrilateral negotiations (US, EU, South Africa, India) and millions of deaths from COVID-19, a draft waiver text was leaked in March 2022. Civil society groups such as Médecins Sans Frontières quickly pointed out several deficiencies in the document, such as limiting the waiver to vaccines but not covering diagnostics and treatments, arbitrarily barring or discouraging countries that have capacity to export COVID-19 vaccines from making use of the waiver (which disadvantages developing countries that do not have domestic capacity to manufacture vaccines), not waiving other forms of intellectual property barriers necessary for ramping up production, and adding onerous TRIPS-plus “clarifications” such as eligible Members having to list all patents covered (mRNA vaccines have around 280 components sourced from 19 countries), among others.

To this day, with millions of lives and livelihoods destroyed by the pandemic, the negotiations at the WTO have dragged on.

The Patent System as Unsustainable Production and Consumption

To this day, with millions of lives and livelihoods destroyed by the pandemic, the negotiations at the WTO have dragged on. Clearly, Big Pharma investment and public health priorities are seriously misaligned, with biomedical and pharmaceutical research in infectious diseases taking a back seat to corporate profits. There is a clear need to move away from the TRIPS regime as “an unsustainable system of production and consumption which violates human rights.”

Big Pharma and their developed country backers have no interest in saving lives and ending the pandemic at the soonest possible time, only in protecting their oligopolies and massive profits for their executives and shareholders. The global intellectual property regime that the WTO has promoted under the TRIPS Agreement has hampered effective pandemic response and allowed more time for vaccine-resistant variants to emerge. With the watered-down TRIPS waiver draft, even the countries of the global North and the WTO itself have acknowledged that the existing patent system for lifesaving products is fundamentally broken and insufficient to deal with crises such as the coronavirus pandemic.

Instead of leaving public health to a handful of pharmaceutical corporations, governments need to move away from the current patent regime and consider alternative ways to incentivise innovation for lifesaving products that do not rely on creating artificial monopolies. We have to demand accountability from governments and corporations that allowed for the policy and market failure that exacerbated the pandemic. We need to urge policymakers to take steps toward the creation of an international publicly-funded biomedical and pharmaceutical research infrastructure that can listen to science and put the lives and livelihood of billions of people above corporate profit. #

After the May Elections: Discontent & Instability (May-June 2007)