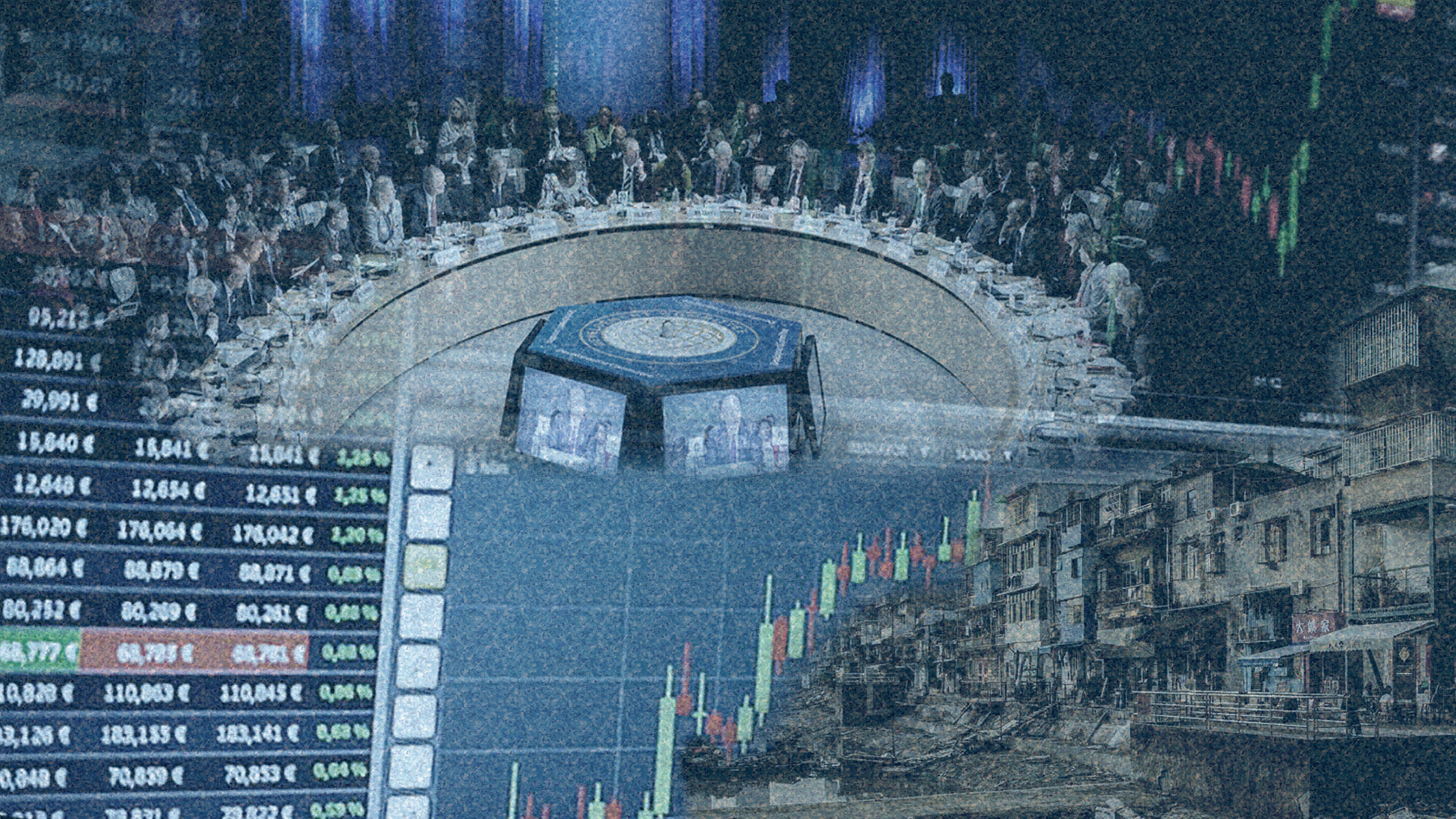 Overburdening Southern countries with debt impedes people’s economic and social rights. Austerity in the name of fiscal discipline only passes the burden of debt onto the people through regressive taxes.

Today’s economic and debt crises have been years in the making. The pandemic and lockdowns have only accelerated the economy’s tendencies toward recession and distress.

International finance institutions (IFIs), especially the IMF and the World Bank, enter the picture with proposed responses to the debt crisis. But their track record in handling past crises should raise doubts about addressing systemic roots. Will IFIs’ responses be adequate to the realities of tremendous debt payments and burdens? Will their responses shift the power imbalance between creditors and borrowing countries? Will they address the global South’s reliance on debt financing and the systemic roots of chronic indebtedness?

Today, debt distressed countries can only turn to debt restructuring to reduce debt burdens or pre-empt a default by renegotiating debt terms. Major international mechanisms supported by the IMF and the World Bank currently consist of the G20’s Debt Service Suspension Initiative (DSSI) and the G20’s Common Framework for Debt Treatments beyond the DSSI.

Far from being solutions, these measures do not actually bring debt relief but only extend the chains of the debt burden. They do not free or reduce debtor countries’ large debt pile but keep them bound to the terms of creditors and capital-holders. In fact, the debt suspension and debt treatments under the DSSI and the Common Framework are tied to new debts.

What these responses hope to achieve in the long run is for debtor countries to regain the capacity to pay and thus the capacity to borrow again in the future. In the process, cuts in spending for public services or new taxes, for instance, have been enforced through conditionalities in IMF loans.

Historically, IFI lending to governments encouraged a particular set of policies and practices, as “strings attached,” through loan conditionalities. These supposedly promote policies conducive to implementing the loans and also acts as guarantees for IFIs that the loans will be repaid. Despite the rising costs of fuel and other essential goods, Southern countries are therefore obliged to prioritise debt servicing by the conditions attached to their loans.

The IMF and the World Bank are key agents when it comes to shaping economies in the global South. Developing countries often turn to these institutions for funding. Ensuring the financial stability of the world economy is part of the IMF’s mandate. It therefore acts as a “lender of last resort” in times of crisis and when countries are unable to borrow from others. Having an IMF programme is also a crucial element to become eligible for the World Bank’s financing.

For decades, IMF loan conditionalities have steered Southern countries to change their financial, economic, and structural frameworks to align with the needs and demands of the global financial system.

When the World Bank and the IMF started loan programmes, these were invested in infrastructure projects and imports that were above the country’s export earnings. Obtaining even bigger loans became necessary to pay for the principal and interest dues.

In the 1980s, a global financial crisis became a threat when the costs of debt servicing had far exceeded repayment capacity. The World Bank and the IMF responded by reorienting national economies with austerity measures to focus on debt servicing along with economic liberalisation, beginning with Mexico in 1982. Still, from then until the 2000s, low- and middle-income countries’ debt had been more than 100% of their exports and primary incomes.

For decades, IMF loan conditionalities have steered Southern countries to change their financial, economic, and structural frameworks to align with the needs and demands of the global financial system. Of the 58,406 conditionalities in IMF loans from 1984 to 2014, 87% focused on four policy areas: external debt and addressing overdue payments; the financial sector; revenue and tax policy; and the liberalisation of trade, investments and exchange. The rest involved privatisation, the labour sector (e.g., wage limits), other reforms (e.g., “anti-corruption”, promoting the “private sector”), and lastly, supposed poverty reduction policies.

IMF conditionalities divert government revenues from social spending, such as on education and healthcare, to debt servicing while opening up Southern economies to unbridled inflows of foreign capital. For the IMF, such free market-oriented reforms allow the most economic development and financial stability. In reality, however, the IMF’s restructuring erodes Southern countries’ development capacity and makes them dependent on more loans to sustain economic “growth”.

The IMF-led adjustments towards debt servicing have transformed Southern countries into export-oriented, commodity-dependent economies. Their exports mostly involve a few kinds of primary goods such as agricultural products and natural resources. They are left with little resources and policy space to develop their own production and are driven to relinquish more of their economies to foreign ownership.

According to the UNCTAD, “[c]ommodity dependence is almost exclusively a developing-country phenomenon.” The number of commodity-dependent countries have been increasing: from 92 in 1998-2002, to 102 in 2013-2018. These Southern countries are consequently more vulnerable to changing commodity prices which can worsen debt burdens.

Unregulated capital flows and high shares of foreign direct investments (FDI) also do not indicate a robust economy. Contrary to the IMF’s assumptions, FDI does not add to developing countries’ productive capacity and stability in the long term. While it may have short-term positive contributions, its longer-term impacts on the balance-of-payments is often negative. FDI drives higher imports and capital outflows, putting pressure on countries’ finances.

Unburdening the people: The need for systemic overhaul

People’s organisations and social movements play a critical role in confronting prevailing power relations and the reshaping of structures. Moving away from the current system—marked by the dominance of capital and plunder of the global South—opens up lasting solutions to social and economic crises.

In contrast to their official mandate of bringing stability and prosperity, the IMF along with the World Bank have been central in the continued draining of resources and destitution of the global South. Their conditionalities, accepted under economic duress, have facilitated the dominance of corporations and the extraction of the South’s resources for superprofits, to the detriment of its peoples.

Overburdening Southern countries with debt impedes people’s economic and social rights. Governments’ larger debt servicing have come at the expense of responding to public needs. Austerity in the name of fiscal discipline only passes the burden of debt onto the people through regressive taxes. The poor and the most marginalised sectors of society bear the brunt of the weight.

Austerity harms basic services such as healthcare and education. Between 2014 and 2016, 39 countries (per available data) decreased their domestic health expenditure as debt service per capita increased. Likewise, between 2015 and 2017, at least 21 low- and middle-income countries showed a drop in education expenditure as a percentage of GDP while debt service as a percentage of GDP grew.

Restructuring economies around a dependence on exporting primary commodities— agricultural, fuel, and mineral products—compromises food security and the people’s control over their own resources. Domestic agriculture and land-use are reoriented towards a few varieties of cash crops or even monoculture to match world market demands. Farmers who had some degree of self-sufficiency find they now have to buy food they have previously grown.

Social movements, people’s organisations, and civil society organisations (CSOs) have long criticised the harms and dangers of the IMF and the World Bank’s conditionalities. The IMF’s own research has pointed to the role of austerity measures in fueling inequality. Yet as inequalities widened over the course of the pandemic, the IMF has continued to steer countries towards austerity.

Ending the constant precarity faced by peoples in the South and bringing true stability to their economies require radical and systemic shifts in international economic governance.

CSOs have long-standing calls for equitable sovereign debt resolution mechanisms—unfettered by the interests of big creditors and where the people, most of all, can have inclusive participation. People’s organisations should have a voice and influence in policy decisions on debt. The people’s needs must have primary urgency over debt servicing.

Conditionalities must be abandoned. Rather than pushing for austerity, governments should increase public spending on healthcare, education, and transport, among other social services. This will enable more effective pandemic responses and economic support. To do this, creditors must be pushed to genuine debt relief by canceling Southern countries’ payments with no interest, charges, or penalties. Corporations and wealth could be taxed to generate revenues instead of taxes on the people. Establishing capital controls should be an option for Southern economies.

Full cancellation of debts must also be an option when debts are proven to be unjust, illegitimate, or have stultified long-term Southern development. Southern countries must also be free to repudiate debts on these grounds.

Instead of loans, new emergency assistance to respond to the overlapping crises today should come in the form of grants. Donor states must keep to their historical aid commitments through official development assistance after decades of colonialism. They must uphold development effectiveness as a framework for development cooperation.

Systemic shifts are necessary conditions for the global South to pursue sustainable, strategic industries and agriculture. In the end, this will reduce current and future reliance on debt financing.

The ravages of IMF conditionalities further discredit neoliberal policy—and show why it is time to abandon this policy framework.

Such drastic transitions are more likely with collective assertions of the people. People’s organisations and social movements play a critical role in confronting prevailing power relations and the reshaping of structures. Civil society and progressive parliamentarians could support people’s resistance to the IMF and other IFIs’ unequal and deleterious arrangements. Moving away from the current system—marked by the dominance of capital and plunder of the global South—opens up lasting solutions to social and economic crises. #

Read the first part of this article.

Alexander Dy is studying Philosophy, focusing on International Relations, at Ateneo de Naga University. He is currently an intern at IBON International to further his understanding of the international and socioeconomic structures that affect the development of the global South. He is an activist in Philippine social movements working for people’s rights and genuine democracy.

Online forum / An economic future for whom? The Cascade/MFD and recovery (March 25)

Amid the talk of recovery: Never forget the World Bank Group’s role in our crises