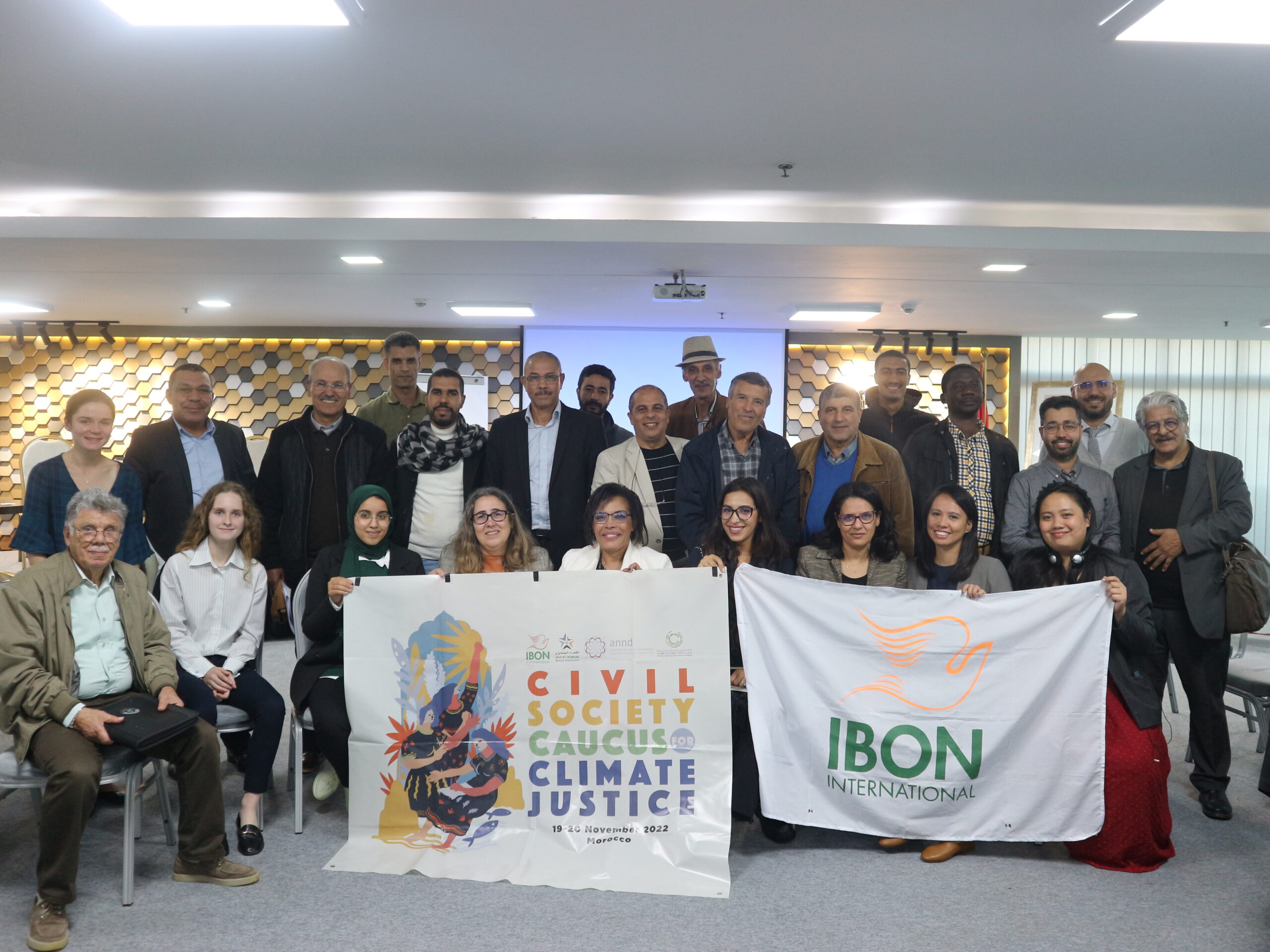 Following the COP27 climate negotiations in Sharm el-Sheikh, Egypt, civil society organisations convened from 19 to 20 November 2022 in Rabat, Morocco to articulate Southern peoples’ demands for climate justice, and to hold governments and institutions accountable for their failure to address the climate crisis. The Civil Society Caucus for Climate Justice was co-organised by IBON International, with the Arab NGO Network for Development (ANND), Espace Associatif, and Coalition Marocaine pour la Justice Climatique (CMJC).

The CSO Caucus held plenary sessions, covering the socio-economic situation and climate priorities in the West Asia and North Africa region, the outcomes and pledges made at COP27, and various thematic and sectoral issues in advancing climate justice through system change.

The colonial roots of the climate crisis in the global South

Firas Jaber, co-founder and researcher at the Social and Economic Policies Monitor (Al Marsad) – Palestine, spoke about the regional situation and the continuing struggle to end colonialist exploitation and resource plunder. While the economies of the Arab world have heavily relied on fuel and gas exports, only multinational corporations have stood to benefit from these industries. Poverty and unemployment still ravage many of the countries in the region.

Mounir Hassine, a human rights and environmental activist from the Tunisian Forum for Social and Economic Rights (FTDES), talked about the impact of climate change on social justice in Tunisia. Pressing problems such as sea level rise inundating the Tunisian coasts, forest fires, and water scarcity are compounded by an unsustainable, export-led development model that heavily depend on natural resource use. Hassine emphasised the need “to rethink the patterns of production and consumption that have emerged from the current development model and the neoliberal ideas that only take into account the laws of the market, but not environmental justice and sustainability.”

Mohamed Said Saadi, a Moroccan economist and the former Secretary of State for Social Protection, Family and Children, dealt with the concept of a just transition from a Southern perspective. Saadi noted that the dominant notions of ecological transition has a tendency to reinforce existing socio-economic and sectoral inequalities. This is especially true in the global South, where the importance of extractive industries has been inherited from the era of direct colonialism. He also criticised the ideas of “green growth” and “green capitalism”, the objectives of which are not to fight climate change, but to ensure future growth and protect investors. The capitalist development model based on private ownership of the means of production, the exploitation and commodification of labour and nature, and the infinite growth of profits, Saadi argued, is incompatible with the preservation of planetary ecosystems and social justice.

Abdelhadi Bennis, President of Club Environnement, Association Ribat Al Fath pour le Développement Durable, focused on issues of food sovereignty and the development of agriculture in Morocco since independence, from the state’s commitment to food self-sufficiency to the onset of the neoliberal structural adjustment programmes and Morocco’s entry into the WTO.

While the economies of the Arab world have heavily relied on fuel and gas exports, only multinational corporations have stood to benefit from these industries. Poverty and unemployment still ravage many of the countries in the region.

IBON International’s climate justice programme manager Ivan Enrile reported back from the UN climate talks in Egypt. At COP27, rich nations tried to shirk from being held accountable for their historical responsibility for the climate crisis and demanded the same level of commitment from developing countries in terms of climate action, according to Enrile. This ignores the principle of common but differentiated responsibility. “Developed countries like the US, the EU, Switzerland, and Norway are starting to talk more and more about shared responsibilities… The history of who needs to pay for climate debt is being erased in this narrative,” Enrile added.

Enrile also highlighted the need for new and additional funding for addressing loss and damage (L&D) due to weather extremes and slow onset events. While a L&D funding facility was established at COP27, “[t]he Group of 77 (G77) and China also emphasised the need to recognise in the discussions on L&D finance the principles of common but differentiated responsibilities and respective capacities, equity, and historical responsibility.”

Sara Benyakhlef, an expert in renewable energy, discussed the energy transition in Morocco and the outcomes of COP27. Benyakhlef highlighted that meeting the 2050 targets will depend on sufficient action by 2030. This, she said, will involve a radical shift in policy direction and well-targeted policy packages.

“Developed countries like the US, the EU, Switzerland, and Norway are starting to talk more and more about shared responsibilities. The history of who needs to pay for climate debt is being erased in this narrative.”

The roles of the IMF, World Bank, and the WTO on the climate crisis

Elaine Zuckerman, the founder of Gender Action, an advocacy group focused on holding international financial institutions (IFIs) accountable for their harmful gender and climate impacts, spoke against false climate solutions being promoted by IFIs like the International Monetary Fund (IMF) and the World Bank Group (WBG). Zuckerman criticised what she saw as IFIs’ “doublespeak” of adopting green terminology but continuing to support projects and their private corporate beneficiaries that bring harm to the people and the environment. “False climate solutions such as corporate [net-zero] pledges allow for continued rising GHG emissions, putting the burden of carbon sequestration onto land and tree plantations in the global South. Governments and corporations that have pledged to achieve net zero do so by a distant date, in 2050 when it is too late. We must remember questions of fairness and ethics like whose land and forests are they using to sequester carbon, whose emissions, and whose responsibility,” Zuckerman said.

On the other hand, Ranja Sengupta, a researcher for the Third World Network, focused on elements of neoliberal trade and investment agreements which hamper efforts at sustainability and climate action. These include control of our food systems by agrochemical multinational corporations (MNCs), protection of intellectual property monopolies impacting farmers’ right to seeds, and investor protection provisions which allow foreign companies to sue governments for environmental conservation and climate action. Sengupta criticised the push for sustainability in the World Trade Organization (WTO) and in various free trade agreements as “doublespeak” in which the environment agenda is being used as a tool for further extraction.

The CSO Caucus called out the rich polluter countries and their corporations on their attempts to evade responsibility, and denounced the “greenwashing” of corporate plunder by the IMF, the World Bank Group, and the WTO.

Zidi Omar, a civil society activist from CMJC, zeroed in on rising socio-economic inequality and climate change. Omar pointed to three critical measures to narrow this gap: (1) increased social spending on public services; (2) progressive taxation; and (3) raising wages for ordinary workers and strengthening labour rights, especially for women. He emphasised that, “Climate justice means breaking with the status quo that protects global political elites, multinational corporations and undemocratic regimes. Its aim is to bring about a social and ecological transformation and adaptation process that enables a better life for humanity and the living on the planet.”

The CSO Caucus came up with a unity statement incorporating learnings from the event, calling out the rich polluter countries and their corporations on their attempts to evade responsibility, and denouncing the “greenwashing” of corporate plunder by the IMF, the World Bank Group, and the WTO. The Caucus also stood in solidarity with Egyptian prisoners of conscience and insisted on the central role of workers, farmers, Indigenous Peoples, women and youth, LGBTQI, persons with disability, and other marginalised communities in climate policymaking and governance. The unity statement concluded with the call for a shift towards a system that upholds people’s rights and development as the basis for climate and social justice. #

Appeal for aid to the Hagupit-ravaged areas in the Philippines