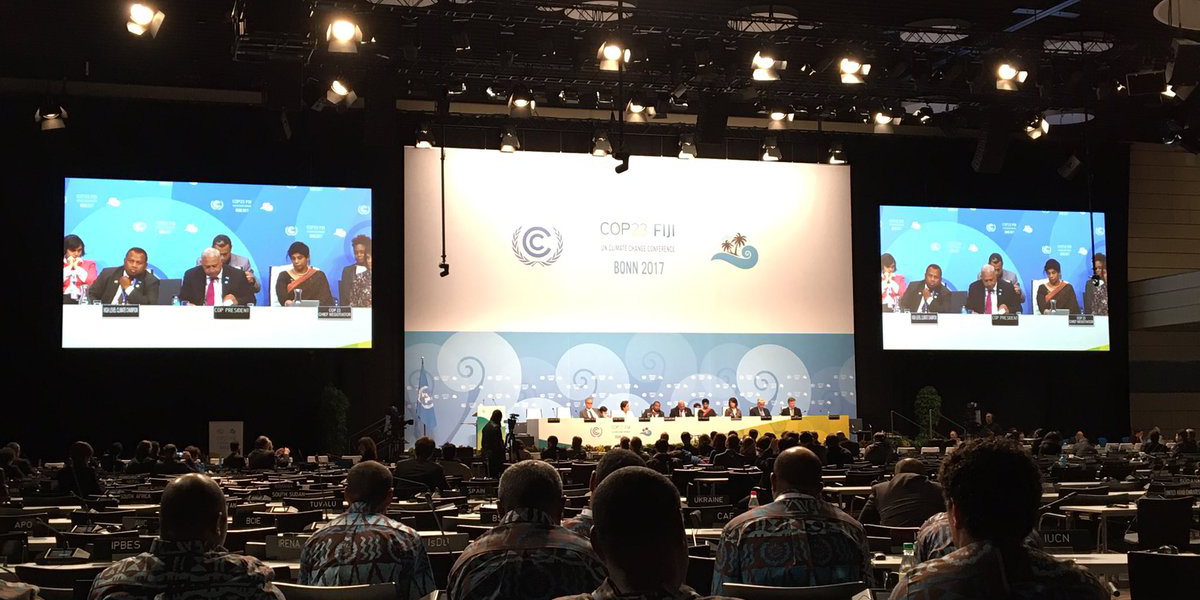 November 18, Bonn – The 23rd Conference of Parties (COP 23) of the United Nations Framework Convention on Climate Change (UNFCCC) wrapped up its two-weeks negotiations early Saturday morning, hours behind its scheduled closing, which was suspended for several times as governments tried to find an acceptable compromise solution on hotly-contested matters. Fiji, as the first ever island state to hold the presidency of the COP, had its hands more than full as it strived to make Parties agree on the ways forward in implementing the 2015 Paris climate change accord.

The annual summit aimed to move closer towards agreeing on a rulebook to guide the implementation of the Paris Agreement, which saw governments submitting their pledges towards keeping global temperature rise to well below 2 degrees Celsius, and if possible, below 1.5 degrees. The negotiations also focused on designing the 2018 Facilitative Dialogue (which is now more popularly referred to as the ‘Talanoa’, a Fijian term for an inclusive and transparent dialogue) in order to review progress in achieving the temperature goal that would inform the revision and improvement of countries’ contributions to climate action, including financing. Critical questions on where the world stood in terms of the reality and impacts of climate change, where it wants to go to address the problems, and how to get there will be raised at this dialogue.

The talks have been rocky from the start, as developing countries pointed to developed countries’ intransigence to commit to pre-2020 actions, which were crucial building blocks for implementing the Paris deal, which will start only in 2020. Rich countries countered this by saying they have almost already made good on their standing commitments to reduce emissions and provide finance, and as such the talks should delve on how to implement the new climate deal. This of course, was refuted by developing countries, who said that these supposed achievements by developed countries were made by double-counting development aid (official development assistance or ODA) and buying their polluting way out through carbon markets.

Negotiations on the Paris rulebook have been particularly difficult with regard to making sure that developed countries fulfill their historical responsibility towards providing finance and technology transfer, and that developing countries have a way to track what has actually been provided and not just promised.  There were intense disagreements on whether the Adaptation Fund (established under the Kyoto Protocol) would be carried over as well to the Paris Agreement, called for by developing countries, as the fund had been relatively successful and accessible at supporting initiatives at local level. The Warsaw International Mechanism (WIM) set up in 2014 in recognition that huge losses and damages (both economic and non-economic) occur both from sudden (supertyphoon, cyclones, etc.) and slow onset (sea level rise, desertification, etc.) events till did not have concrete financial commitments.  The US, European Union, Australia and other rich countries blocked agreements on new financial commitments to resource the WIM, and as the talks closed, all that was agreed on was to form an expert group to discuss the matter.

And so COP 23 wrapped up, thanks to skillful diplomacy, with drafts of chapters of the Paris rulebook. This will be taken up and decided on at the next COP in Poland, and soon after, countries that have ratified the agreement will have to start implementing domestically.

There were some positive takeaways from this year’s COP. Among these include the adoption of the Gender Action Plan and the Indigenous People’s Platform – both already provided for in the Paris Agreement and yet there was still much disagreement among governments on how to actually make good on these, despite having agreed on these two years ago.

A number of initiatives in margins of the negotiations are also worth keeping an eye on.

InsuResilience Global Partnership (IGP) for Climate and Disaster Risk Finance and Insurance Solutions was launched at the COP 23, bringing together G20[1] countries in partnership with the V20[2] nations, World Bank, civil society, international organizations, academia and the industry. The IGP is a voluntary platform resourced from donor-provided public money, which seeks to promote climate risk insurance for countries and communities affected by climate change. Some analysts see this as a form of rich countries skirting their responsibility and commitment in providing finance to developing countries while at the same time attracting private investors and companies with the use of government budget allocations.

There was also the establishment of the ‘Power Past Coal Alliance’, led by the United Kingdom, France, Italy and Canada together with other countries and states, businesses and organizations supposedly committing to the rapid phase out of ‘traditional coal power’ as energy source and to cease all investment in coal domestically or abroad. Germany, the world’s fifth-largest consumer of coal, getting 40% of its energy from lignite, is not part of this coalition. However, the integrity of this alliance is already in question, since they endorse a convenient escape hatch with the use of carbon capture and storage (CCS) which means they would still be able to keep coal plants operational by trapping their carbon dioxide emissions underground.

As the curtains go down on COP 23, the world sees more of the same, i.e. governments forever locked-in negotiations with the same deep divide over the future of humanity and the planet, while cooking up ‘solutions’ that intensify environmental problems, to prop up the global system of economy, trade, finance and politics that has brought the world to its current state of multiple crises. ###

September issue of IBON/RoA Country Outreach Newsletter is out