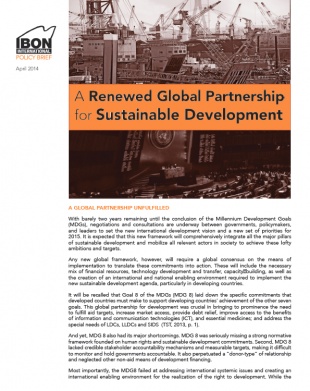 With the approaching conclusion in 2015 of the Millennium Development Goals (MDGs), talks are underway among governments, policymakers, and leaders to set a new framework for international development beyond 2015. Any new global framework, however, will require a global consensus on the means of implementation to translate these commitments into action.

It will be recalled that Goal 8 of the MDGs laid down the specific commitments that developed countries must make to support developing countries’ achievement of all other MDGs. This global partnership for development was deemed crucial for the success of the MDGs.

However, Global Partnership as defined in MDG 8 is quickly being reframed to mean “partnerships” between governments, multilateral agencies and large multinational corporations. Over the past decade, such partnerships have been formed to address specific challenges. The recommendations contained in the various major post-2015 reports also mirror this renewed push for partnerships with the private sector.

This IBON Policy Brief addresses the pros and cons of partnering with the private sector, and which private sector, for the post-2015 development agenda, and explores other alternative models of development partnerships. It calls for a just and transformative Global Partnership for Sustainable Development and offers specific recommendations for key reforms and actions towards building such a partnership.