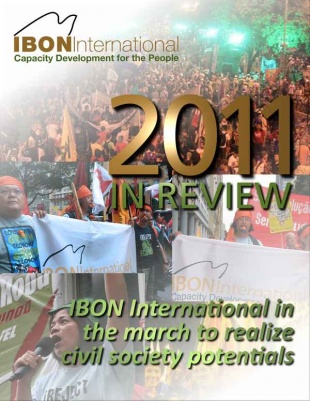 2011 IN REVIEW: IBON International in the march to realize civil society potentials

This report highlights IBON’s and its partners’ accomplishments in 2011 through programs and networks that it hosts. From around six people in 2005, its staff compliment including staff seconded in networks has grown to 36, with its turnover growing to the maximum projected for the medium term.
We believe that IBON International has distinguished itself in 2011 as an international NGO (INGO) with Southern roots and, more importantly, a Southern character and distinct program of capacity development of peoples and their social movements in developing countries.
We publish this report, thanking everyone who marched with us—the people and their organizations who became our partners; our partners in international programs and initiatives who contributed in various ways; and our supporters who continue to wish us well.
On behalf of the officers and staff of IBON International, we express confidence in facing together with our partners and supporters the bigger challenges and prospects of further advance in the coming years.