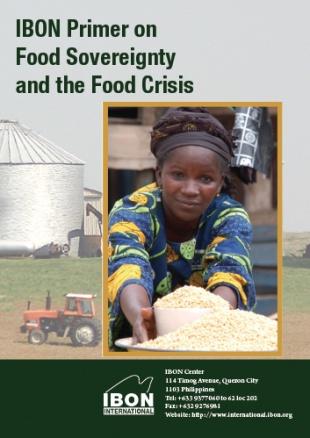 THE IBON PRIMER ON FOOD SOVEREIGNTY AND THE FOOD CRISIS reaffirms what people's and peasants' movements and food policy activists all over the world have long insisted: that global hunger has not been solved by tremendous gains in food production because it is rooted in systemic poverty generated by social inequities.

A growing number of grassroots organizations have banded together in recent decades to to shape an alternative human rights-based framework for agriculture and food policy, as they engage in issues ranging from landlessness to neoliberal globalization, from the pitfalls of industrial agriculture to the effects of climate change.

Principles and proposals relating to food sovereignty are then expounded, to show that indeed there are practical and viable ways out of global hunger and poverty. The primer ends with a call for peoples and communities in all countries to assert their rights to food, food production and access to productive resources at the community, national and international levels.