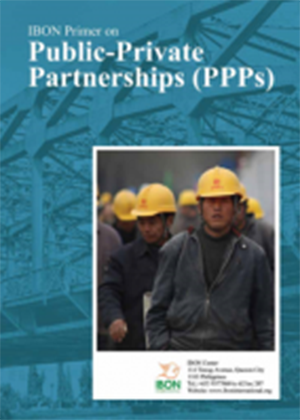 Public-private partnerships (PPPs) have gained popularity especially since the failure of privatization programs initiated by the World Bank, the International Monetary Fund (IMF), and other bi- and multilateral institutions. Yet in some ways, they pose an even greater challenge to sustainable and people-oriented development.
Rather than privatization outright, PPPs are privatization with added benefits. Not only do private business secure profits; these profits, as well as potential risks are subsidized by the state. PPP contracts establish flows of public resources into private hands. PPPs,furthermore, reorient government priorities in ways that undermine democratic ownership over development.
The current trend towards the use of development resources for PPP implementation must be replaced with greater and more democratic public sector leadership, and the enforcement of regulatory mechanisms  — including those concerned with transparency and accountability  — that ensure the development contribution of private sector actors.
Table of Contents
Introduction: Public-Private Partnerships — Privatization by Other Means
Chapter 1:  Public-Private Partnerships Advancing Neoliberalism
Chapter 2:  Promotion of Public-Private Partnerships
Chapter 3:  Conclusion: Safeguarding Democracy and Accountability in the Face of Public-Private Partnerships