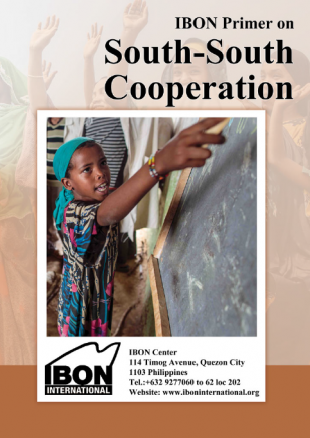 DEVELOPMENT ASSISTANCE, in the traditional North-South mode, has been based mainly on industrialized nations of the Global North providing aid to developing countries of the Global south to help meet the latter's development goals. Donor-recipient relations have been characterized as unequal and paternalistic, and aid has been used as a foreign policy tool for geopolitical and economic interests of developed countries. Such characteristics of traditional North-South aid led to the Global South's search for alternative development approaches.

South-South cooperation emerged in the 1950s in the context of the common struggle of former colonies for genuine independence and development. In the past few decades, there has been a notable rise of cooperation among Southern countries. They engage among themselves in active diplomatic dialogue, forums and knowledge-sharing hubs, regional or global economic or political formations, and development cooperation. These activities among the Global South are collectively referred to as South-South Cooperation (SSC).

SSC presents an opportunity for the Global South to create alternative spaces to pursue their development path. There is a need to thoroughly study and review the global experience of countries engaged in SSC for them to wield it as a more effective development tool.

This IBON primer serves as an overview and initial exploration into the complexity of SSC, its particularities as a mode of development cooperation, the opportunities it brings, and the challenges that it faces.